Trash from S. Korea to be shipped back starting Jan. 19 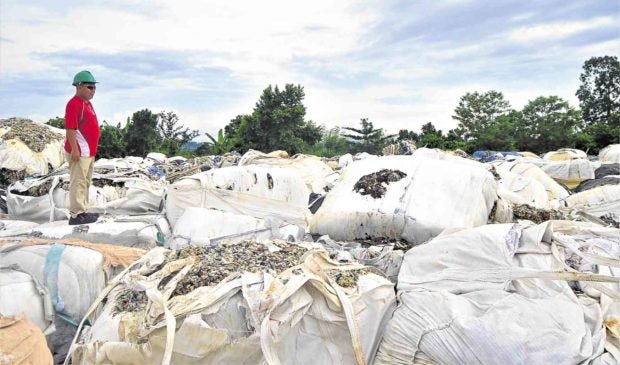 Customs officials are preparing the reexportation of the pile of mostly plastic trash that was imported from South Korea and stored at Phividec Industrial Estate facility in Tagoloan, Misamis Oriental. (Photo by JIGGER J. JERUSALEM / Inquirer Mindanao)

MANILA, Philippines — Over 5,000 tons of garbage illegally shipped from South Korea, and have remained dumped in an industrial estate in Mindanao for over two years, will be exported back starting Jan. 19.

According to environment groups EcoWaste Coalition and Interfacing Development Interventions for Sustainability (Idis), Bureau of Customs-Region 10 port officer John Simon confirmed to them that the tons of trash, which was dumped at the Phividec Industrial Estate in Tagoloan, Misamis Oriental in July 2018, will be sent back.

Sixty container vans of illegally dumped waste from Verde Soko Philippines Industrial Corp. will be returned to South Korea on Jan. 19, while the rest of the trash will be shipped back on Feb. 9 with vessels from Maersk International Shipping Lines as the official carrier, Simon said.

Another 1,500 metric tons later came in October 2018. This was later shipped back to South Korea in January 2019, following an agreement made between the Philippine and South Korean governments.

Three officials of Verde Soko were charged for the importation.

“The long wait will soon be over,” Simon said. “The re-exportation of the misdeclared plastic wastes to where they come from should send a clear signal to all parties that our beloved country is not a global dump and that waste traffickers will be held accountable to the fullest extent of the law.”

Idis executive director Chinkie Peliño-Golle hailed the announcement, adding that this was “good news” for the people of Mindanao.

“The re-shipment of the South Korean waste to its source is a historic win for our people and the environment,” Peliño-Golle said. “This is only a partial victory as the culprits behind this toxic mess have yet to account for their misdeeds.”