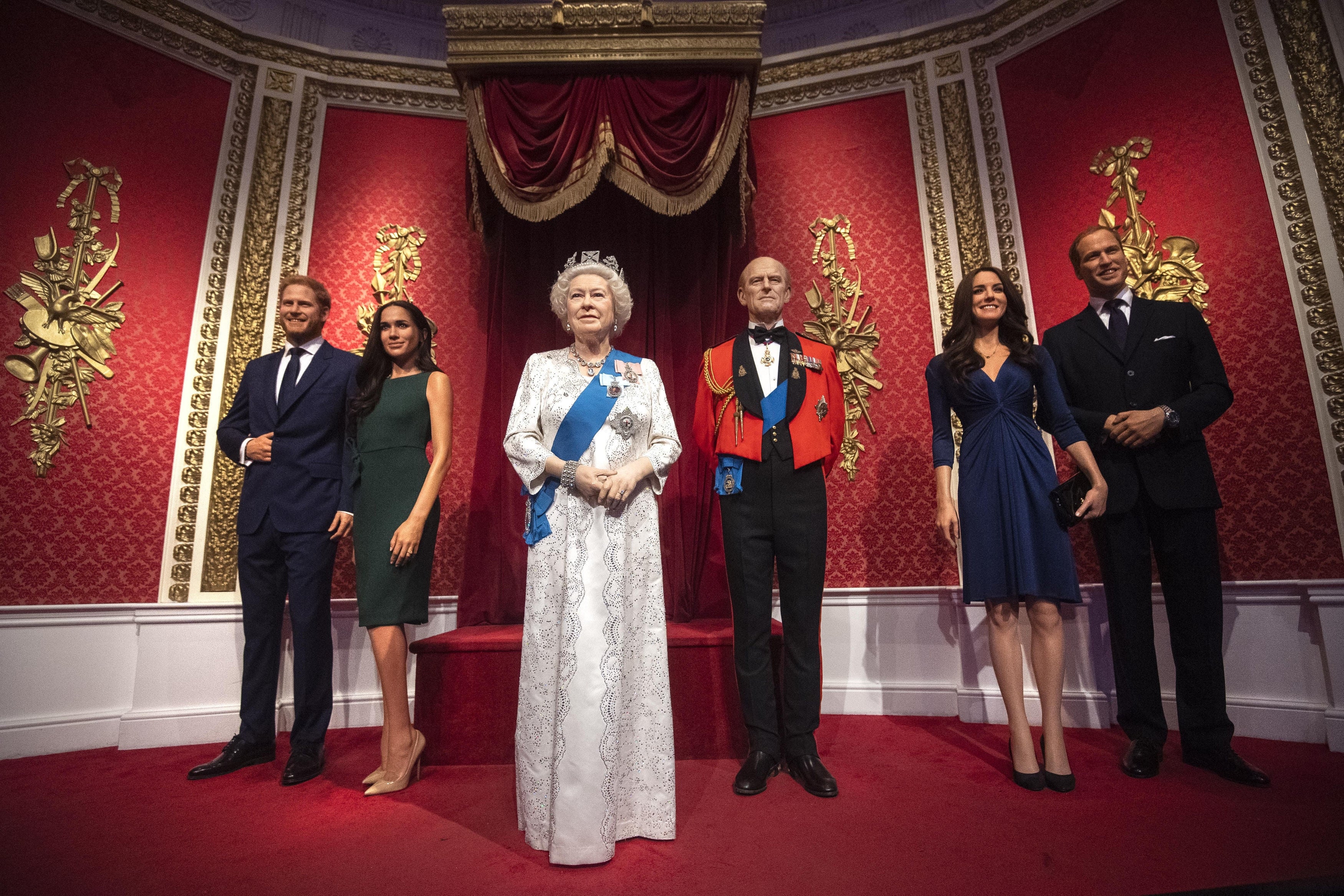 NEWFAMILY DYNAMICS The wax figures of Britain’s royal family composed of Prince Harry and Meghan, Duchess of Sussex (left), Queen Elizabeth II and Prince Philip, and Prince William and Kate, Duchess of Cambridge, used to stand in majestic solidarity at Madame Tussauds museum in London. After Harry’s and Meghan’s announcement of stepping back from royal duties, the couple was removed “to reflect the upcoming change in the royal lineup.”—AP 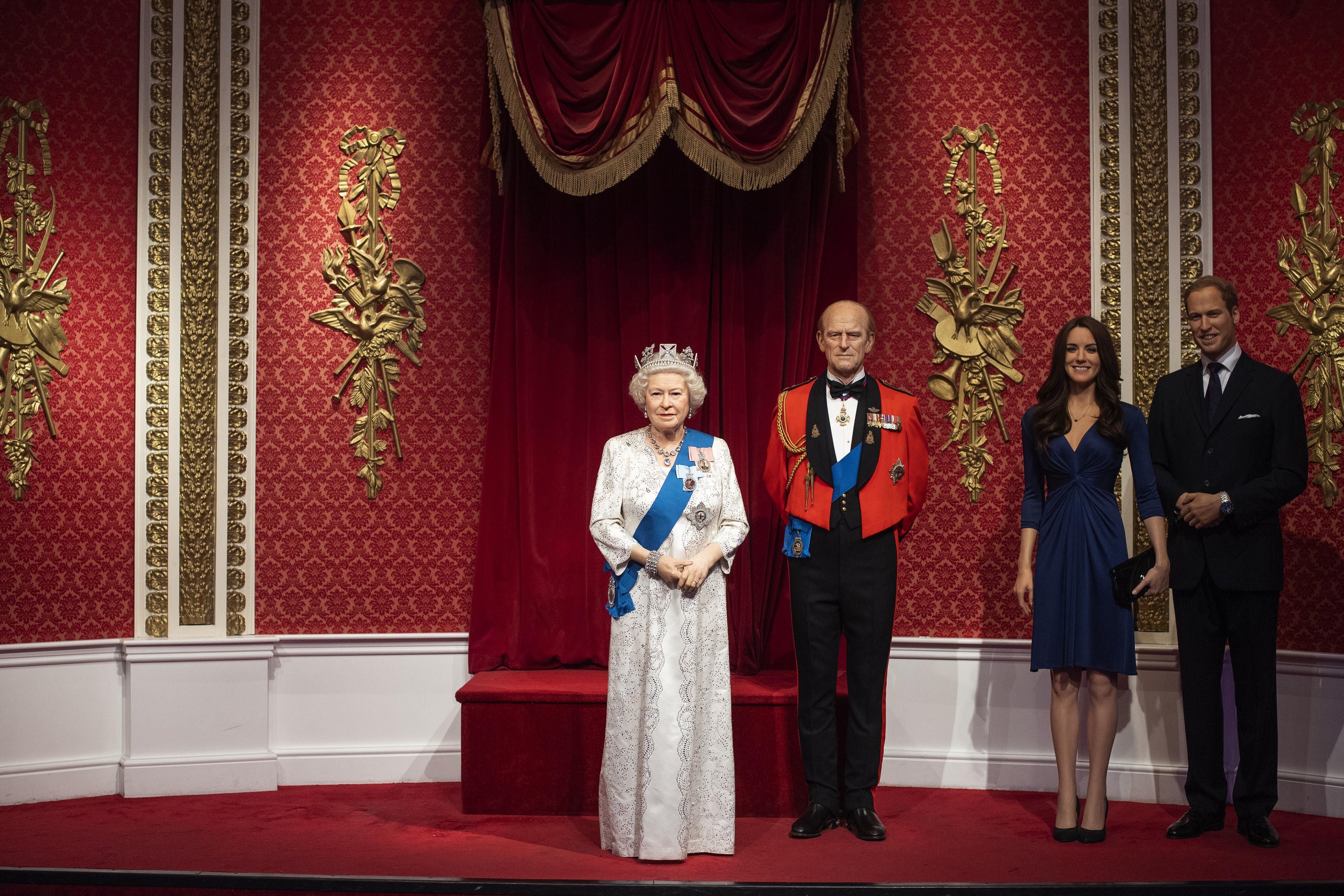 LONDON—The British monarchy scrambled on Thursday to find urgent “workable solutions” for Prince Harry and his wife Meghan after being caught offguard by the couple’s decision to quit front line duties and seek financial independence outside of the royal family.

Queen Elizabeth II, heir to the throne Prince Charles and his eldest son Prince William, Harry’s brother, have ordered their aides to work with Harry’s household and Prime Minister Boris Johnson’s government to come up with swift answers to the royal crisis.

This process is “expected to take days, not weeks,” a Buckingham Palace source said.

Harry and Meghan, the Duke and Duchess of Sussex, rocked the monarchy on Wednesday with an announcement made without consulting any senior royals from the sovereign downwards.

In a statement on a pre-prepared new website, their Instagram account and through Buckingham Palace’s email communications system, the couple said they would now “balance” their time between Britain and North America, rip up long-established relations with the press, and seek financial independence.

“We have chosen to make a transition this year in starting to carve out a progressive new role within this institution,” the couple said, adding however that they would continue to support the monarchy.

An hour and 40 minutes later, the palace, seemingly rattled, issued a brief statement of its own, saying discussions were at an early stage and involved “complicated issues.”

London’s Evening Standard newspaper said the couple had “defied clear instructions from the queen” not to go public about any future plans at this time. It added senior courtiers had warned the couple “will be punished for this.”

The mood in the palace was understood to be one of disappointment and “even hurt,” according to the BBC, while Thursday’s newspapers were full of reports of a family “split” and the Queen’s “dismay.”

Meanwhile, Madame Tussauds London said it was moving its waxworks of the pair away from other top family figures “to reflect the upcoming change in the royal lineup.”

“This is symptomatic, clearly, of the fact that they are unhappy with royal roles and feel deeply pressured,” he said. “They’ve chosen to … go rogue. The result, therefore, could have very serious consequences,” he added.

Harry, 35, and Meghan, 38, are among the core members of the royal family and, along with William and his wife Kate, are seen as embodying the monarchy’s future.

But Harry’s stinging statement about general tabloid coverage and the lawsuits he filed against some of them reflect the changing dynamics within the royal family.

Asked if Meghan was facing the same media pressures as his mother, Diana, who died in a car crash in Paris in 1997 while being pursued by paparazzi, Harry said: “I will not be bullied into playing a game that killed my mum.”

Meghan herself, when asked if she was “not really OK,” and if life had “really been a struggle” after becoming mother to Archie and living under intense media scrutiny, turned emotional and replied simply, “Yes.”

“I believe in choices in life,” said a woman from North Carolina, “though I think it should have been coordinated more closely with the rest of the family and communicated more gracefully.”

Said a Russian tourist: “It’s tricky because they are huge public figures and they have duties associated with the royal family. But at the same time, they have only one life and they have to live it like they want.”

A Brazilian translator meanwhile approved that Harry chose his family over the crown. “They’ve got all the spotlight on them and the media wasn’t very nice to Meghan,” she said, referring to the racist slurs that the mixed-race Duchess of Sussex had been subjected to since she married Harry in 2018.

“Stepping aside was a wise choice,” she added.

Locals were less impressed, however, saying that the couple “knew all along what they were getting into and should have stepped up to the challenge.”

Acknowledged another: “It’s a very busy job, but it also comes with a lot of privileges.”

Read Next
DOF denies replacement of Customs chief
EDITORS' PICK
IATF to LGUs: Issue ordinances vs attacks on frontliners, COVID-19 patients
Quick chat with Nicole Andersson: ‘You really don’t need much to be happy’
Robredo spox thanks Duterte for defending VP’s efforts vs COVID-19
Diokno to Duterte: OK to make fun of buck tooth, but focus on people’s needs first
Nograles: Cabinet members to donate 75% of monthly salary to aid COVID-19 fight
10 Filipinos positive for COVID-19 in UK, 7 in Ireland — envoy
MOST READ
Coronavirus hotbed Rizal to shut borders on April 6
Gov’t mulling quarantine period extension of 15-20 more days
Sotto on Isko Moreno’s call: We do our job without the media following our every move
Robredo spox thanks Duterte for defending VP’s efforts vs COVID-19
Don't miss out on the latest news and information.