MANILA, Philippines — The country’s top diplomat, Secretary Teodoro Locsin Jr., on Friday got into a heated dialogue with protesters outside the Department of Affairs (DFA) office in Pasay City.

WATCH: Migrante International holds a dialogue with Foreign Affairs Secretary Teodoro Locsin to call for the repatriation of OFWs based in the Middle East back to the Philippines and provide social services to Filipinos here and abroad.#NoToUSWarOnIran

In a Facebook live video posted by the progressive Kabataan party list, Locsin could be seen speaking to reporters while rallyists led by Arman Hernandez of Migrante International were behind him.

The protesters were calling for the repatriation of overseas Filipino workers (OFWs) based in the Middle East back to the country amid escalating tensions between the US and Iran, as well as the death of a Filipino domestic worker in Kuwait who was allegedly killed by her employer’s wife.

As Hernandez continued to air out the group’s concerns, the DFA secretary suddenly turned to him saying, “Oh bugbugin mo ako! Sige!” (Alright, then beat me up! Come on!)

The protester then shot back: “Hindi po ito usapin, secretary, ng bugbugan. Ang kailangan po namin ay proteksyon. (This is not a matter of fisticuffs, secretary. What we’re asking for is protection).”

Locsin later addressed the group’s concerns: “For one, yung patayan sa Kuwait? Sinabi ko na, ‘A life for a life.’ No other compromise. I don’t like the ransom.”

Hernandez then asked Locsin how the government plans to repatriate millions of Filipinos stranded in the Middle East.

“There are people there who work in the shelters. We will bring them home… Meron din konting problema, meron dyang government na nagsasabi kahit they want to go home, they will pay exit permit.  We will pay the exit permit,” Locsin said.

Locsin later promised: “Kung yung ayaw umuwi, we will stay there, and we will protect them as much as we can.” 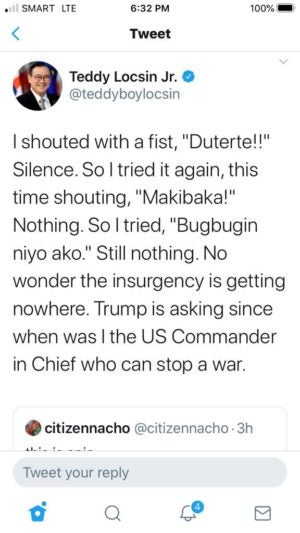