Trump turns to those he has scorned for help on Iran 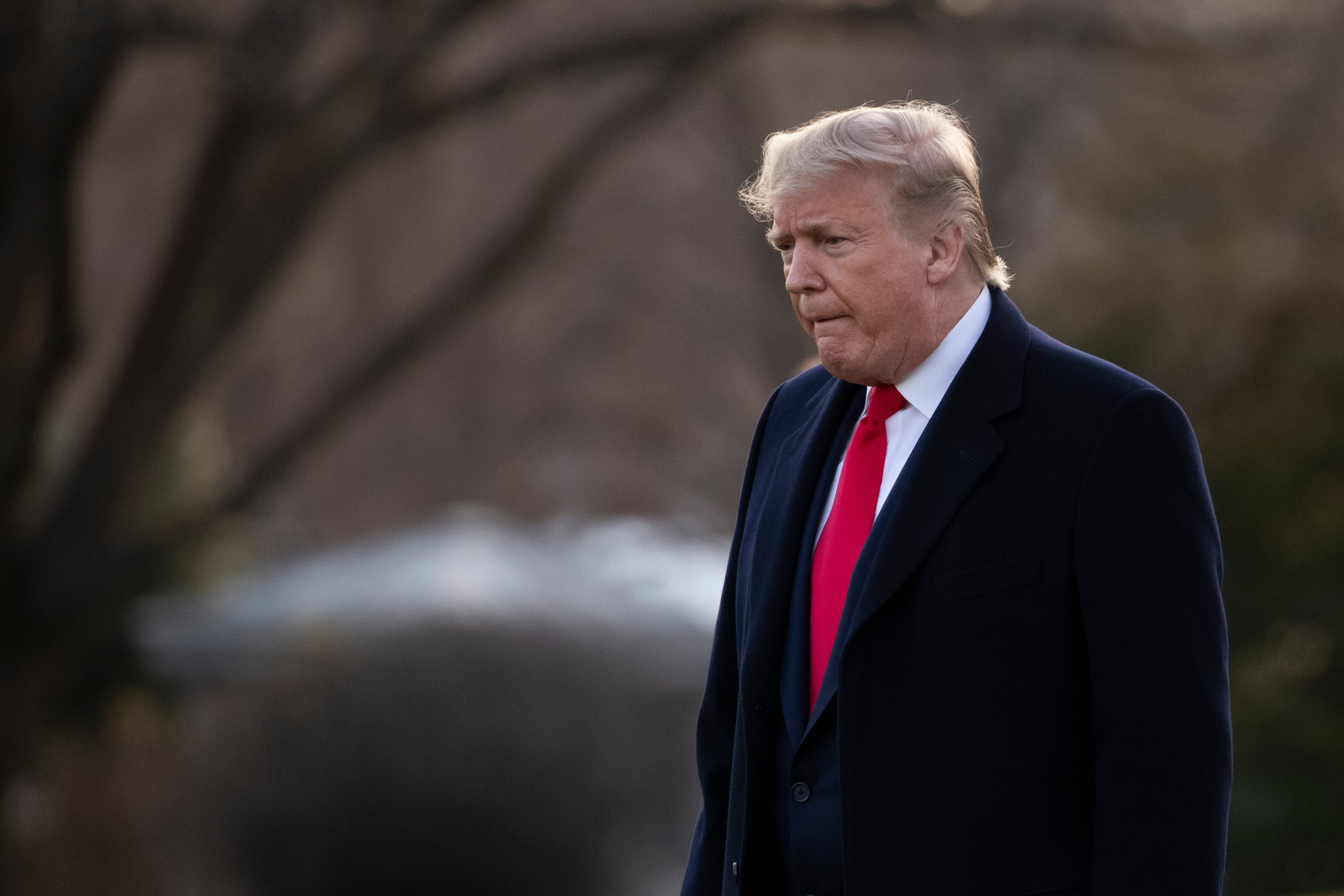 President Donald Trump walks to board Marine One on the South Lawn of the White House, Thursday, Jan. 9, 2020, in Washington. Trump is en route to Ohio for a campaign rally. (AP Photo/Alex Brandon)

Trump, who once said that U.S. spy agencies should “go back to school,” is now highlighting the intelligence services’ work that led to the fatal air strike against Iran’s most powerful general. “There’s some dripping irony, but nobody thinks all of a sudden he loves us,” said Marc Polymeropoulos, a recently retired 26-year CIA veteran who held assignments in the Mideast, Europe and Eurasia.

Also, after three years of dismissive comments about NATO and other European allies, Trump says he wants them to help more in the Middle East. He even suggested a new possible name of “NATOME” to add emphasis on the Middle East.

Following his order to kill Iranian Gen. Qassem Soleimani, and the dangerous aftermath of Iran launching missiles at U.S. military installations, Trump said he would like to see more NATO troops in the Middle East because the problems there are international in scope.

His latest entreaty is also the freshest test of whether he can bend other nations and international alliances to his will and convince them to join with him after years of letting many of those relationships wither.

“I think NATO should be expanded and we should include the Middle East, absolutely…Right now the burden is on us and that’s not fair,” Trump said Thursday.

Trump noted how the U.S. had crushed Islamic State militants, eliminated their control of territory and killed IS leader Abu Bakr al-Baghdadi. “We did Europe a big favor,” he said.

How receptive U.S. allies in Europe will be to working with the Trump administration on Mideast issues, particularly Iran, remains unclear, especially given how nations like France were dedicated to the Iran nuclear agreement that Trump abandoned.

“Trump has nothing in the bank with the Europeans. There’s no goodwill. There’s no sense of trust — no sense that they can rely on him,” said Derek Chollet, senior adviser for security and defense policy at The German Marshall Fund of the United States. “They are not going to be looking to do Donald Trump a favor.”

Chollet, who likened the U.S. fatal strike on Soleimani to taking a “baseball bat to the hornet’s nest,” also said Trump has not been specific — at least not publicly — about what he wants Europe to do. Help him negotiate a new nuclear deal with Iran? Sanction or punish Iran? Provide troops in the Middle East so he can pull U.S. forces out?

Since Soleimani was killed, Secretary of State Mike Pompeo has engaged in a brisk round of telephone diplomacy. He’s spoken to officials from China, Britain, Germany, France, Pakistan, Afghanistan, Russia, Saudi Arabia, Iraq, Turkey, Israel, India, Qatar, Belarus, Ukraine, Bahrain, the United Arab Emirates and the United Nations. All the calls were about Iraq and Iran, along with other issues.

In a call with NATO Secretary General Jens Stoltenberg Thursday, Pompeo reiterated Trump’s call for NATO to become more involved in the Middle East. The State Department said the two agreed NATO could contribute more to regional security and the fight against international terrorism.

Ted Galen Carpenter, a defense and foreign policy analyst at the CATO Institute, said Trump’s call for greater NATO involvement is “not a terribly realistic expectation but it is consistent with Trump’s ongoing demand for greater burden sharing by U.S. allies.”

“He seems to have forgotten the European anger over his decision to cancel the Iran nuclear agreement,” Carpenter said.

European nations have worked to keep the Iran nuclear deal on life support after Trump pulled the U.S. out of the agreement. Kenneth Pollack, a former CIA intelligence analyst and expert on Middle East politics and military affairs, said he thinks Iran will be careful about ramping up its nuclear program too much, but that the killing of Soleimani has likely changed Tehran’s mindset.

“’A very important element of why Iran signed the Iran deal in 2015 was because they concluded that the U.S. was not going to attack them. Bush didn’t. Obama didn’t. They thought they didn’t need a nuclear weapon to deter the U.S.,” said Pollack, who is now at the American Enterprise Institute.

“I think this has suddenly changed Tehran’s calculus — that Trump is so aggressive and unpredictable and ignorant — that they will look at this and say ‘You know what? We need a nuclear weapon.’”

Trump, who says he is not interested in ousting the Iranian regime, reinstated economic sanctions on Iran after withdrawing from the deal. He said it gave Tehran too many economic benefits without doing enough to prevent Iran from eventually developing a nuclear weapon.

Britain, France, Germany, the European Union, China and Russia have remained in the 2015 pact, but Iran has abandoned its remaining commitments under the deal, although Iran President Hassan Rouhani said Thursday that Tehran would continue to cooperate with U.N. inspectors.

Vice President Mike Pence said Thursday that in coming days Trump will be asking the Europeans again to scrap the 2015 Iran nuclear pact. But even if Trump is successful in getting Iran to the negotiation table, nuclear talks take time, the presidential election is looming and Iranian military commanders are threatening further retaliatory strikes that would make talks unlikely.

Behnam Ben Taleblu, a senior analyst on Iranian security and political issues who speaks Farsi, said despite losing its charismatic and capable military general, Iran remains resolute. “That means Washington, more so than ever before, is going to need a regional approach to dealing with Iran,” said Taleblu with the Foundation for Defense of Democracies in Washington.

Britain said in a statement Thursday that it stands by the nuclear deal and urged Iran to return to full compliance. German Foreign Minister Heiko Maas said Trump appears to be open to negotiations on Iran’s ballistic missiles and the nuclear accord, but that “at the moment, everyone is accusing each other of not abiding by the obligations of the treaty.”