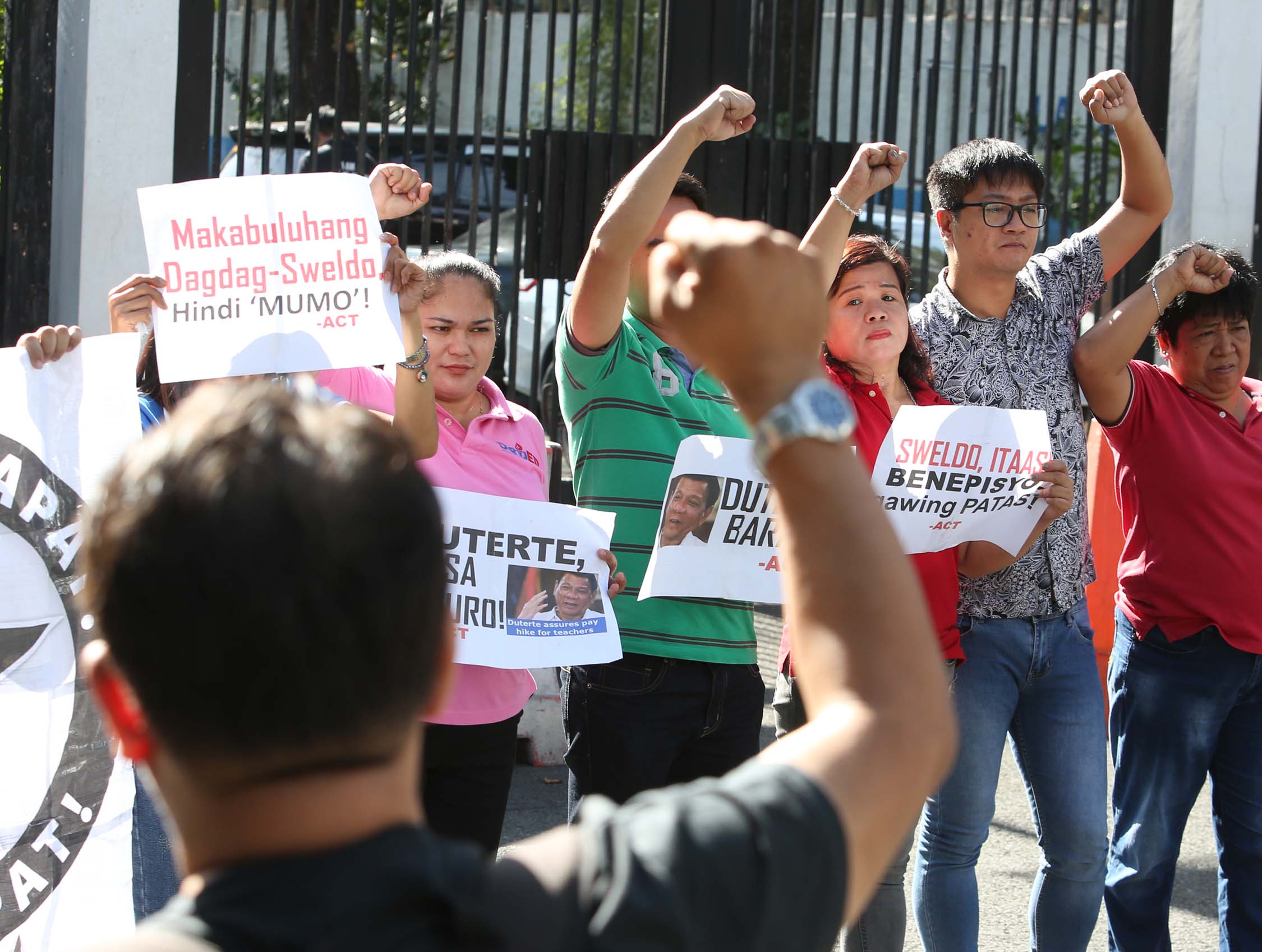 PRESSING FOR PAY HIKE Teachers hold a lightning rally before Malacañang in December to call for a P30,000 monthly salary. —MARIANNE BERMUDEZ

MANILA, Philippines — President Rodrigo Duterte on Wednesday signed the Salary Standardization Law (SSL), which will provide government workers a pay hike ranging from 17.1 percent to 24.1 percent to be given in four tranches from 2020 to 2023.The raise comes a day after the President signed the P4.1-trillion 2020 national budget, which allocates P33.16 billion in salary increases for government employees, including public school teachers.

“This is the fulfillment of the President’s promise to increase the salaries of our public servants. It is our hardworking men and women in government who ensure that our children are getting the proper education, infants and mothers in all communities are given the appropriate health services, roads and bridges are constructed; in other words, keeping our government up and running all the time,” said Sen. Juan Edgardo Angara, chair of the Senate finance committee, in a statement.

Biggest increaseFor all four tranches, the total funding requirement will reach P130.45 billion, he said.Midlevel government workers, or those at salary grades 11 to 13, will get the biggest increases of 24.1 percent in 2020, and 30.7 percent in 2023, Angara said of the pay hike for entry-level teachers, accountants, agriculturists, civil defense officers, special investigators and statisticians.

Government workers under salary grades 1 to 10 will receive a 17.5 increase in their salaries in the first year.

Angara has also filed a bill to increase the minimum wage of public school teachers from salary grade 11 to salary grade 19, which amounts to P46,791 a month.

“We hear the pleas of our teachers and understand where they are coming from. Our teachers are among the hardest workers in the bureaucracy and have long been among the lowest paid. We need to do something about this soon,” the senator said.

Mr. Duterte has repeatedly promised to raise the salaries of teachers. He had earlier provided substantial increases in the salaries of soldiers and policemen.In a speech on June 13 last year, the President said he was “working on (his) promise,” but added that the “million[s] of teachers” did not make things as easy as in the case of the police who number only about 160,000 and the military who are at 130,000. “It’s easy. That’s why their salaries have doubled,” Mr. Duterte said.

According to the Department of Education, there are an estimated 900,000 public school teachers nationwide.

Raymond Basilio, secretary-general of the Alliance of Concerned Teachers expressed disappointment over the new salary increases.

“President Duterte disappointingly has nothing to show for all his big talk patronizing teachers and honoring his mother,” he said.

“This is far (less than) we expected,” said Benjo Basa, chair of the Teachers’ Dignity Coalition, adding that the President should have adopted the SSL 5 submitted by Congress instead.

“He promised a P10,000 hike over and above the SSL when he ran for office in 2015, and we waited for three years,” Basa said.—WITH REPORTS FROM MATTHEW REYSIO-CRUZ AND JULIE M. AURELIO