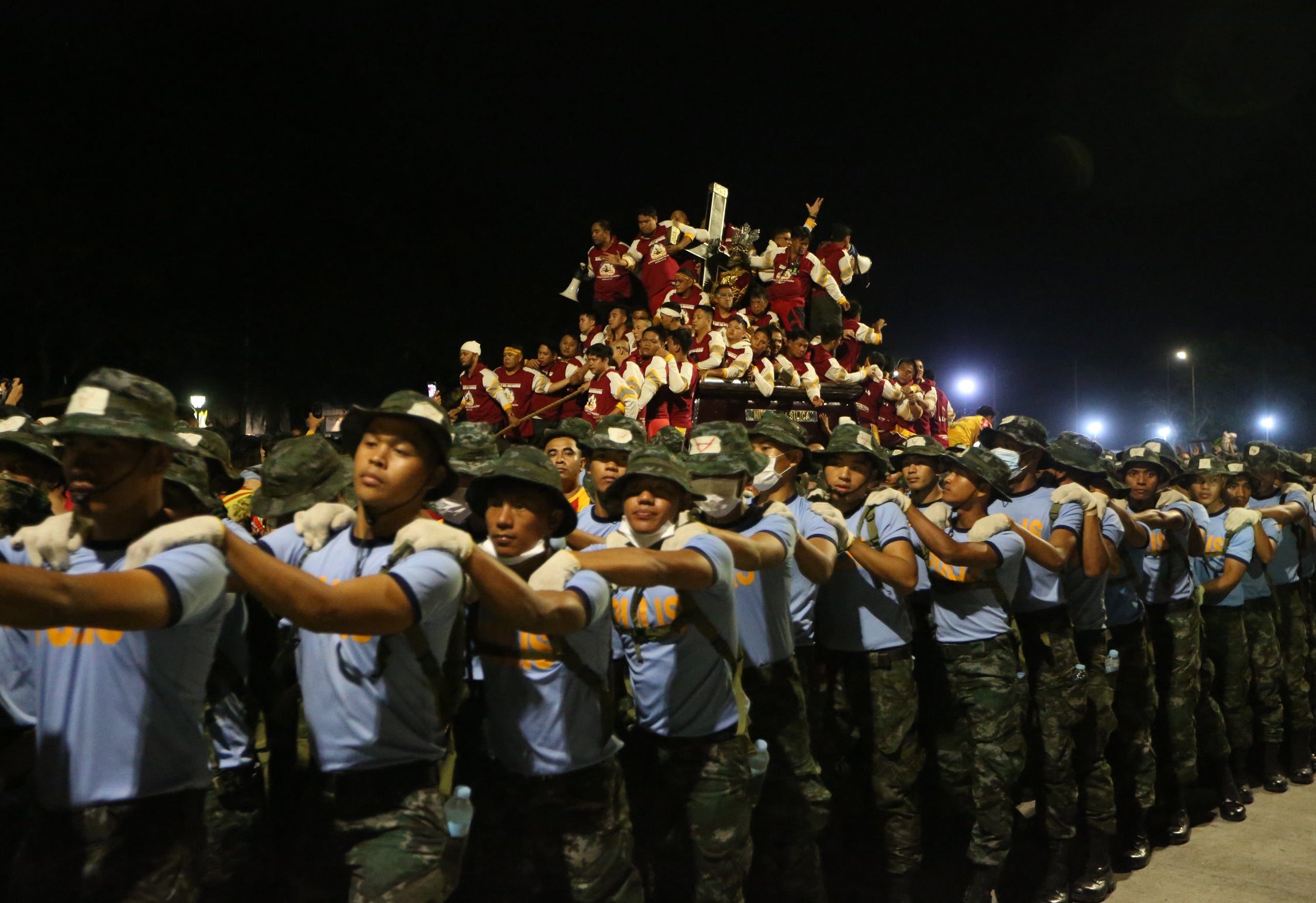 WALL OF PROTECTION The carriage bearing the Black Nazarene leaves the Quirino Grandstand surrounded by a formidable barricade of men in blue. –NIÑO JESUS ORBETA

MANILA, Philippines — The “andas wall” composed of over 2,000 policemen proved to be no match for the faith and determination of around 2 million devotees of the Black Nazarene during Thursday’s “traslacion.”

When the procession left the Quirino Grandstand in Rizal Park around 4 a.m.—more than an hour ahead of schedule—the 2,144 policemen positioned in front and on both sides of the carriage were able to keep the faithful at bay.

They stood out in their navy blue shirts, camouflage pants, combat boots and bucket hats amidst a sea of maroon, prompting one devotee to remark, “It’s like a fiesta of the police!”

But as the procession got to the smaller streets of Palanca, Arlegui and Fraternal, the policemen were forced to break ranks, allowing the devotees to inch their way closer to the carriage.

According to him, the police will regroup and reform the protective wall as soon as the procession approaches Quiapo Church for better crowd control.

“No matter what kind of barricade they create, they can never stop the millions of us from showing our devotion,” said Elaine Tomolva, 24.

She added: “We’ve been here for years and it takes only a few tugs from us to force them out of the way.

Kenji Ibisate, 17, agreed, saying: “Their numbers are nothing compared to us, compared to our faith.”

“This is the only time in my 10-year devotion that I wasn’t able to climb the andas. Why would they prevent us from getting near the Señor? It’s so unfair,” the visibly irate Tengco said. ‘Overkill’Grace Allejo also thought the security measure was “OA” (overacting). “They wanted the Black Nazarene to themselves. Overkill!” she said.

In the past, the traslacion has moved at a painstakingly slow pace because of people jostling to get near the image. Last year, it took 21 hours for the blessed image to return to Quiapo Church.

But on Thursday, the procession pace was much faster, thanks to the wall of policemen. Church officials estimated that it could end around 6 p.m.

At 4:27 p.m., the procession stopped in front of San Sebastian Church for the traditional “dungaw,” which depicted the image of the Our Lady of Mount Carmel gazing at her suffering son. Last year, the andas reached the church around 10 p.m.

The only downside to the speedier pace was that some people like Alma Kalugdan missed their chance to see the Black Nazarene.

She went to the intersection of Taft Avenue corner Finance Road around 9 a.m., only to find out that the procession had passed by the area hours ago.

Kalugdan expressed sadness, saying that catching a glimpse of the image had always been the highlight of her traslacion experience.

“It’s so surreal when you see him. You feel the hair on your body rising and you feel that the Nazareno’s spirit is alive,” she said.

“We can’t do anything about the pace because the intention of the church and the police is good. We don’t want any incidents. I’m just a little dismayed this year because usually I get to join the procession from the start,” he said.

Gimenez, who started praying to the Black Nazarene at age 17, comes from a long line of devotees. For this year’s traslacion, he was accompanied by 13 family members, including his wife and children.

He said that the Black Nazarene had always looked after his family and that joining the procession was his way of giving thanks.

“This is all thanksgiving for me. I don’t have to ask because He already knows what we need,” Gimenez added.

The Manila Disaster Risk Reduction and Management Office estimated the total number of this year’s participants at over 2.1 million as of 3:11 p.m.

According to the Manila Public Information Office, about 218 people suffered injuries and were treated at the city’s command station in Quiapo Church at 3:16 p.m. 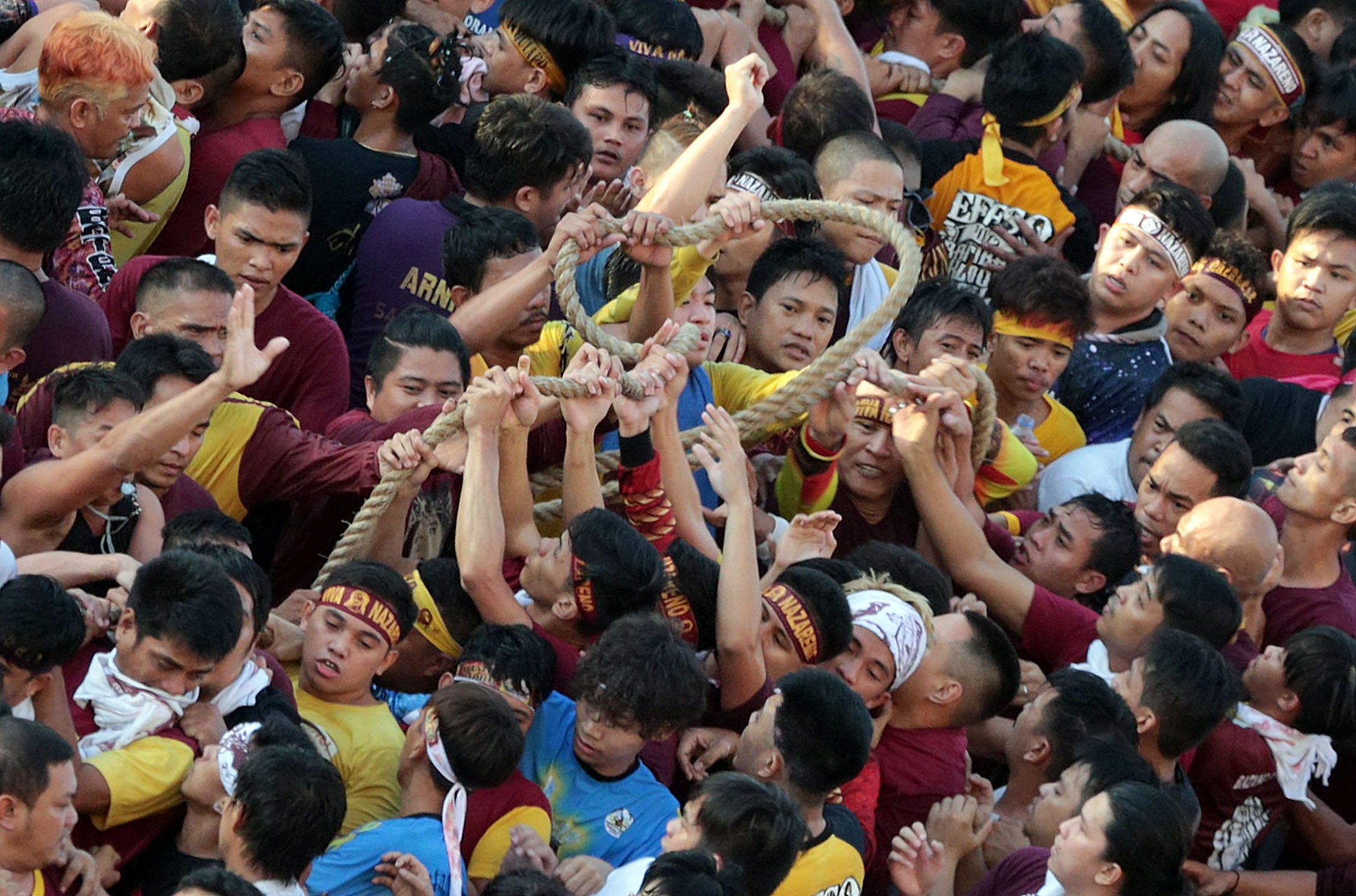 ROPE OF FAITH Devotees jostle each other for the chance to touch the rope pulling the carriage of the Black Nazarene. –GRIG C. MONTEGRANDE

The Philippine Red Cross, however, said that its personnel attended to 986 devotees. Of this number, 270 suffered minor injuries, including dizziness, laceration, abrasion and sprain. Twenty-five others complained of difficulty in breathing, head injury and high blood pressure. There were 14 who were taken to nearby hospitals for hypertension, fracture, dislocation, fainting and loss of consciousness.

Some complained that they were injured by the combat boots worn by policemen who were part of the andas wall. It is customary for devotees to go barefoot during the procession.

Philippine National Police spokesperson Police Brig. Gen. Bernard Banac said that they would look into this.

“If indeed the combat boots of policemen caused [injuries], it was unintended,” he told the Inquirer. “We take note of this now to be taken up during the post-event assessment.” –With reports from Tina G. Santos and Jeannette I. Andrade