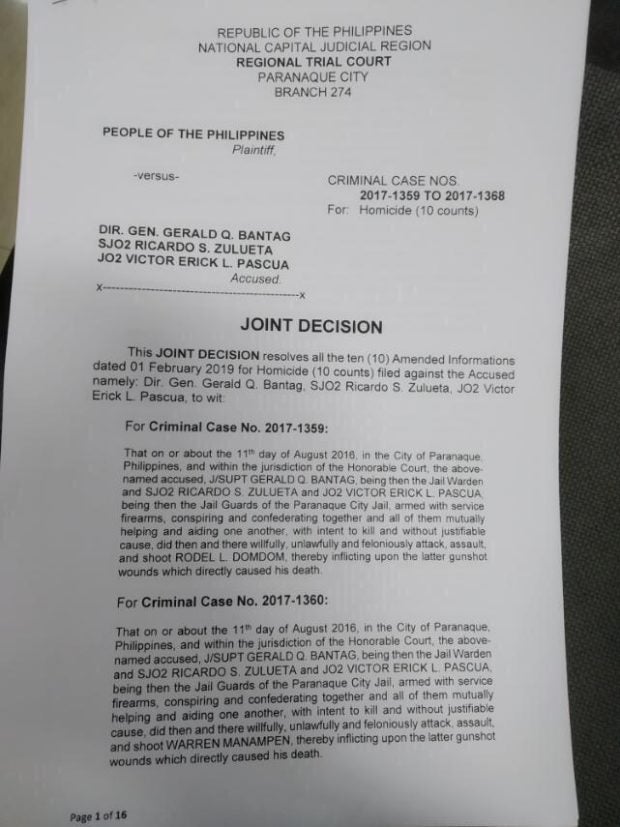 A portion of the decision of the Parañaque RTC in the multiple homicide charges filed against BuCor chief Gerald Bantag.

MANILA, Philippines – The Parañaque Regional Trial Court has acquitted Bureau of Corrections (BuCor) Director Gerald Bantag and his co-accused facing 10 counts of homicide for the 2016 grenade explosion at the city’s jail facility.

“After thorough perusal of the records and the pieces of evidence presented by the prosecution, this Court finds the pieces of evidence to be insufficient to warrant the conviction of all the accused beyond reasonable doubt,” read the court’s decision as it dismissed the case against Bantag and Senior Jail Officer 2 Ricardo Zulueta and Jail Officer 2 Victor Erick Pascua

Bantag was then warden of the Parañaque City Jail when the incident happened on Aug. 11, 2016.

Pascua, in his testimony, said that after arriving from an event in Quezon City, Zulueta informed Bantag that several inmates want to talk to him about jail conditions.

Bantag, on the other hand, said he told the inmates to wait while he proceeded to the lavatory to brush his teeth. While inside, he said he heard a fizzing sound and saw gunshots on the wall prompting him to take his firearm to fight back. He said, he saw one inmate was holding something which was about to be thrown at him so he fired at the inmate and an explosion followed.

As a result of the explosion, Bantag said he was rushed to the hospital due to injuries he sustained while the 10 inmates – eight of which were drug suspects while the two others were for robbery and homicide detainees were all killed.

The case against Bantag and two other jail officers were dismissed for lack of evidence.

Bantag was appointed by President Rodrigo Duterte as head of the BuCor last year replacing Nicanor Faeldon who was dragged in the mess surrounding the premature release of heinous crime convicts. 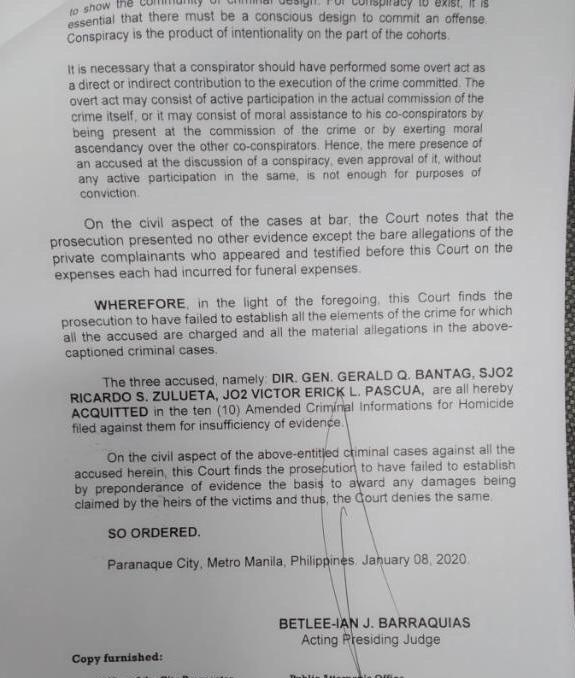 Dispositive portion of the decision of the Parañaque RTC in the multiple homicide charges filed against BuCor chief Gerald Bantag.

The Court said Bantag can refuse to testify but opted to tell the court what happened.

“There is no showing that he had the intention to kill the victims but merely acted in self-defense upon believing in good faith that he was being fired upon by the inmates and one of the inmates was about to throw an unknown object at him which was later confirmed to be a fragmentation grenade,” the court said.

The Court said the prosecution failed to rebut Bantag’s testimony.

The Court said Pascua was only performing his duty when he fired back at the inmates. It added that there is no evidence that the three- Bantag, Pascua, and Zulueta conspired to kill the 10 inmates.