Dengue cases up again in Singapore after 5 weeks of decline 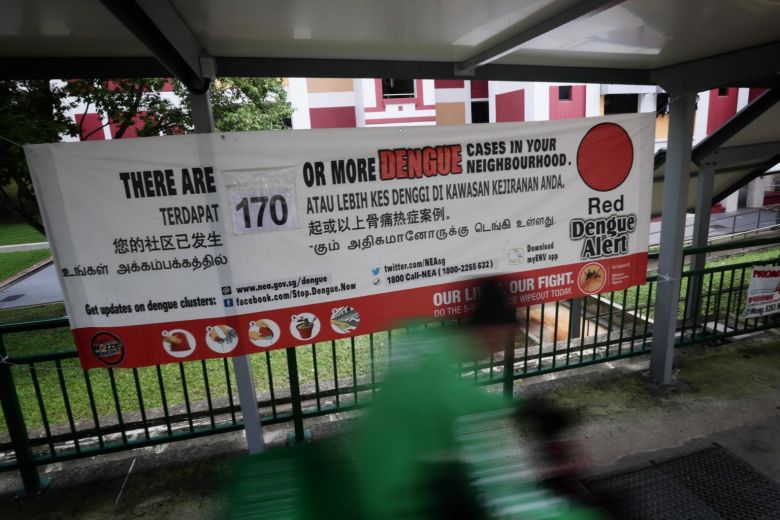 SINGAPORE — Mosquitoes came back with a vengeance over the Christmas and New Year period, as more people came down with dengue after five weeks of falling numbers of infection.

Last week, the number of infections continued to rise, with 314 people diagnosed with the viral disease, an 8 percent increase over the previous week, according to the National Environment Agency (NEA) dengue website.

There are now 86 active clusters, an increase of almost a third since the middle of last month.

Singapore had its third-biggest dengue outbreak last year, with more than 16,100 people down with the viral infection.

There were about 1,500 dengue clusters islandwide during the year. At the infection’s peak, 664 people were infected in one week in July.

Of those infected, 88 people had the more serious, and occasionally fatal, dengue haemorrhagic fever.

Twenty people died of dengue last year. The youngest was 45 years old, and the oldest was 94.

On Dec 20, following five weeks of declining cases of infection, the NEA said in a statement that through its concerted efforts and those of the Government and community partners, there was a 22 percent decrease in the number of weekly reported dengue cases.

The NEA added that the number of active dengue clusters had also declined from 79 to 67 over the same period.

But immediately after this statement, the number of infections diagnosed rose, and the active dengue clusters shot up to 86 currently.

The biggest cluster is in Pasir Ris, with 147 infections, of which seven occurred in the past fortnight. This is followed by a cluster in the Yio Chu Kang area, with 131 cases.

Symptoms of dengue include a sudden high fever, severe headache and pain behind the eyes, joint and muscle pain, tiredness, nausea and vomiting.

Some of those infected also have a skin rash that appears a few days after the start of the fever.

The Ministry of Health advises people with symptoms to see a doctor “for timely diagnosis and management”.

It said: “Although most dengue patients recover from the infection, elderly patients and those with concurrent medical conditions are at higher risk of developing complications that can lead to death.”

Its spokesman added that the number of dengue deaths in Singapore has remained below 2 percent of infections over the past five years.

How to keep mosquitoes at bay

Three out of five mosquito breeding sites discovered by the National Environment Agency (NEA) were in homes.

The top places larvae are found in homes have remained largely unchanged over the years.

They are pails – both inside and in the rims of overturned ones – pots, flowerpot plates and vases.

Aside from flowerpot plates, plant axils – the areas between a leaf and the main stem – and hardened soil are also common areas for mosquito breeding.

The NEA advises against placing plates or trays under flowerpots. If they are used, they should be cleaned every other day, it says. This means not just pouring out the water, but also scrubbing them to remove any unseen mosquito eggs that might cling to them.

Similarly, water in vases should be changed every two days, and the inside of the vases scrubbed, and flower stalks and roots washed.

One female mosquito can lay 300 eggs in its lifetime, which lasts two to four weeks.

In the first 11 months of last year, the NEA took enforcement action against owners of 7,500 premises for mosquito breeding. It did not give details of what the action was.