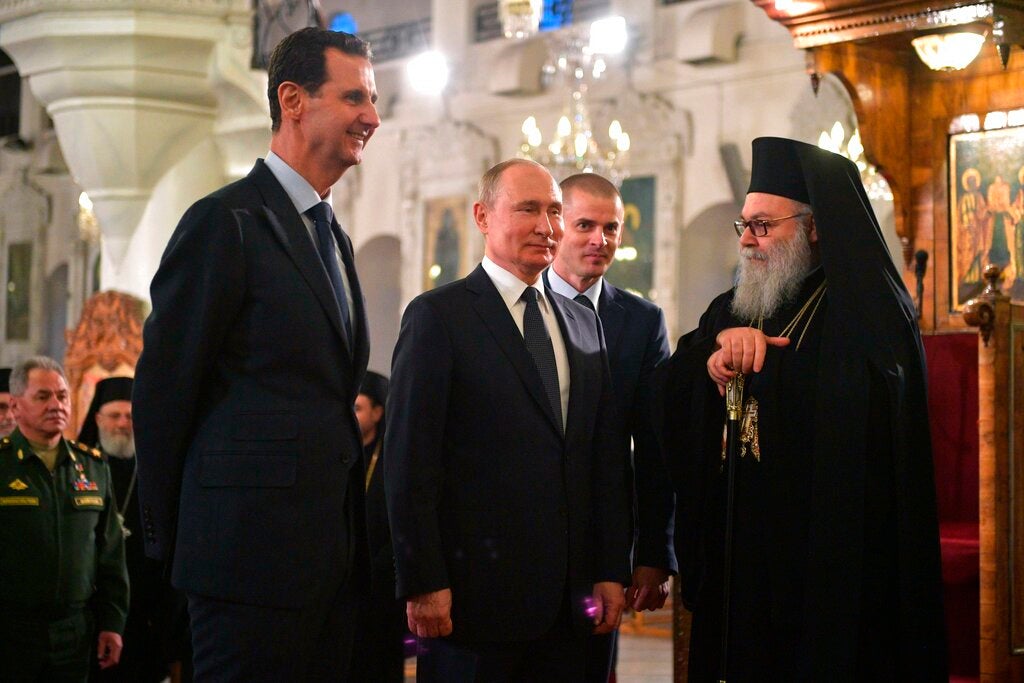 DAMASCUS, Syria — Russian President Vladimir Putin traveled to Damascus on Tuesday for a meeting with President Bashar Assad, a rare visit that comes amid soaring tensions between Iran and United States following the U.S. drone strike that killed a top Iranian general.

While the official statements made during the previously unannounced visit made no mention of the killing last week of Gen. Qassem Soleimani, the timing was conspicuous.

The U.S. strike that killed Soleimani minutes after he landed in Iraq has drawn vows of retaliation from Tehran and its proxy militias in Baghdad and Beirut. It has also led the U.S. to re-position its troops in Iraq following calls by the Iraqi Parliament and prime minister for U.S. forces to leave the country.

Soleimani led Iran-backed forces supporting Assad in Syria’s civil war and played a key role in shoring up his army. With some 600 American troops deployed in Syria, the country is a potential site of conflict with Iran.

Putin’s visit is the second to the country during the war, where his troops have been fighting alongside Syrian government forces since 2015. It comes amid a crushing Russian-backed offensive by Syrian forces on the northwestern province of Idlib, the last rebel stronghold in Syria.

Putin and Assad met at a Russian command post in Damascus, and were presented with military reports on the situation in different regions of Syria, said Kremlin spokesman Dmitry Peskov.

At the same time, Putin noted that the situation in the Middle East “is, unfortunately, escalating.”

During his time in Damascus, Putin visited the Syrian capital’s landmark Umayyad Mosque in the walled Old City together, where he viewed the tomb of John the Baptist who is sacred to both Christians and Muslims.

Putin’s visit coincided with Russian Orthodox Christmas, and Putin congratulated his troops on the holiday, according to a statement from Assad’s office. Photos released by SANA showed the two leaders visiting an orthodox cathedral in Damascus.

Russia joined the war in 2015, when the Syrian military appeared close to collapse. Since then, and largely because of Russia’s blanket air support, the Syrian government has largely won the nearly 9-year civil war militarily, and has retaken control of most of the country from rebel fighters.

In recent weeks, Syrian troops supported by Russian warplanes have been pushing into the country’s last rebel stronghold, located in northwestern Idlib province.

The last time Putin came to Syria was in 2017 when he announced a scale-back of the Russian military presence there. At the time, rebels were still entrenched on the outskirts of Damascus, and he only visited Russia’s Hemeimeem air base in Syria’s coastal province of Latakia. Assad previously visited Russia and met with Putin in May 2018, November 2017 and October 2015.

Close to half a million people have been killed in Syria’s civil war and 11 million have been displaced from their homes, including 5 million who are refugees outside the country.