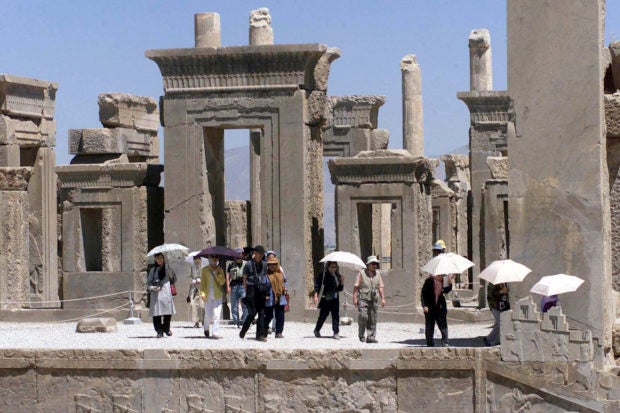 TRUMP TARGET A May 2002 file photo shows a group of tourists at Persepolis, a Unesco World Heritage Site, northeast of the Iranian city of Shiraz. Iran’s ancient and rich cultural landscape has become a potential US military target as Washington and Tehran stumble toward a possible open conflict. —AP

WASHINGTON — The Pentagon on Monday distanced itself from US President Donald Trump’s assertions that he would bomb Iranian cultural sites despite international prohibitions on such attacks.

The split between the president and his Pentagon chief came amid heightened tensions with Tehran following a US drone strike that killed Gen. Qassem Soleimani, the head of Iran’s elite Quds Force.

Trump had twice warned that he would hit Iranian cultural sites if Tehran retaliates against the United States.

Esper’s public comments reflected the private concerns of other defense and military officials, who cited legal prohibitions on attacks on civilian, cultural and religious sites, except under certain, threatening circumstances.

“We have targeted 52 Iranian sites (representing the 52 American hostages taken by Iran many years ago), some at a very high level & important to Iran & Iranian culture, and those targets, and Iran itself, WILL BE HIT VERY FAST AND VERY HARD,“ Trump first tweeted on Saturday.

His Twitter message caught administration officials off-guard and prompted an immediate outcry from legal scholars, national security experts and Democratic lawmakers. But the president stood by his threat the following day.

By international law, however, it does.

Specifically, the 1954 Hague Convention says nations must “take all possible steps” to protect cultural property and shall refrain “from any act of hostility, directed against such property.” It also says nations must not use cultural sites for any threatening purposes that would make such locations a military target.

Outside the Pentagon, Trump’s threats were met with condemnation.

Democratic Sen. Tim Kaine of Virginia said Trump’s inclusion of cultural sites as targets “shows that he is somewhat deranged about this.“

The threats also drew reaction from the Metropolitan Museum of Art in New York.

“The targeting of sites of global cultural heritage is abhorrent to the collective values of our society,” museum leaders said in a statement. “At this challenging time, we must remind ourselves of the global importance of protecting cultural sites—the objects and places by which individuals, communities, and nations connect to their history and heritage.

Other administration officials tried to make clear that the United States would follow the law without directly contradicting the president.

Secretary of State Mike Pompeo on Sunday said that any US military strikes inside Iran would be legal.

“We’ll behave inside the system,” Pompeo said. “We always have and we always will.”

To Trump’s 52 targets in Iran, the country’s President Hassan Rouhani said in a tweet on Monday: “Those who refer to the number 52 should also remember the number 290. #IR655 Never threaten the Iranian nation.” Rouhani was referring to 290 lives lost in July 1988 when a US warship shot down an Iran Air plane in the Gulf.

America’s military strategy in Iraq was thrown into confusion also on Monday as the Pentagon admitted a letter from a general informing the Iraqi government of an imminent US troop pullout was sent by “mistake.”

US Brig. Gen. William Seely informed his Iraqi counterparts in a letter dated Sunday that American troops were preparing to leave Iraq.

“We respect your sovereign decision to order our departure,” said the letter, whose authenticity was confirmed to Agence France-Presse by both Iraqi and US defense officials.

But Pentagon Joint Chiefs Chair Mark Milley said on Monday the letter was a mere “draft” and “should not have been sent.”

“It was a mistake, an honest mistake, a draft unsigned letter, because we are moving forces around,” Milley told reporters in Washington.

Esper said the letter was “inconsistent” with Washington’s position and denied there had been a decision to leave Iraq.

The US drone strike that killed Soleimani, as well as Iraqi military commanders, has sparked fury in both Iran and Iraq, with Tehran vowing revenge.

Iraqi lawmakers on Sunday urged the government to oust all foreign troops from Iraqi soil.

Some 5,200 US soldiers are stationed across Iraqi bases to support local troops preventing a resurgence of the Islamic State group. They make up the bulk of a broader coalition, invited by the Iraqi government in 2014 to help combat the jihadists.

The latest developments came as a sea of black-clad mourners in Tehran paid homage to the 62-year-old Soleimani.