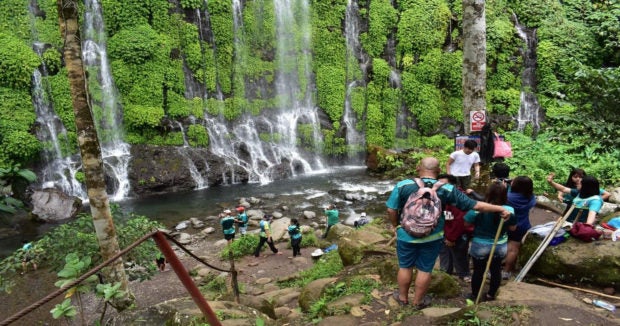 NATURE’S WONDER A team from the Mines and Geosciences Bureau visits Asik-Asik Falls in Alamada, Cotabato, as the agency pushes its conservation and protection for scientific, educational and ecotourism purposes. —PHOTO COURTESY OF MGB REGION 12

COTABATO CITY, Maguindanao, Philippines — The Mines and Geosciences Bureau (MGB) has endorsed the declaration of Asik-Asik Falls in Alamada, Cotabato province, as a national geological monument, citing the need to preserve the area’s unique natural features.

Felizardo Gacad Jr., MGB director in Soccsksargen (South Cotabato, Cotabato, Sultan Kudarat, Sarangani and General Santos) region, said an MGB team visited the site on Dec. 11 and its members were awed by what looked like the winding stairway wrapping around the mountainside of Alamada’s Sitio Dulao in Barangay Upper Dado.

The falls is on the lower slopes of Mt. Ragang, also called Mt. Piapayungan or Blue Mountain, near Cotabato’s boundary with Lanao del Sur province.Gacad, in a statement, said a portion of the falls could be seen from afar but it was only after his team descended that they finally got to see the majesty of the falls, with its lush greenery covering the entire landscape.

He said a comprehensive scientific report presenting the unique geology of the area had been submitted to the National Committee on Geological Sciences to support its declaration as a national geological monument.

Geological monuments are sites that show outstanding features or earth processes considered by geologists as worthy of conservation.

A study was conducted in late 2018 to establish a detailed geologic interpretation of the evolution of Asik-Asik landscape. It involved geomorphological investigations, geophysical studies and laboratory analyses of rock samples gathered from the site and its vicinity, the MGB statement said.

The MGB regional office also signed a memorandum of agreement with Sagittarius Mines Inc., which funded the P1-million geologic study of Asik-Asik Falls.

“MGB [Region] 12 is fully supporting efforts to make the geologic site as a national geological monument because it will focus on enriching understanding and appreciation of a geological phenomenon,” the statement said.

“It will also promote scientific and educational purposes as well as a potential ecotourism destination to benefit the local government and the people of Alamada and the country as a whole,” it added.—Edwin O. Fernandez