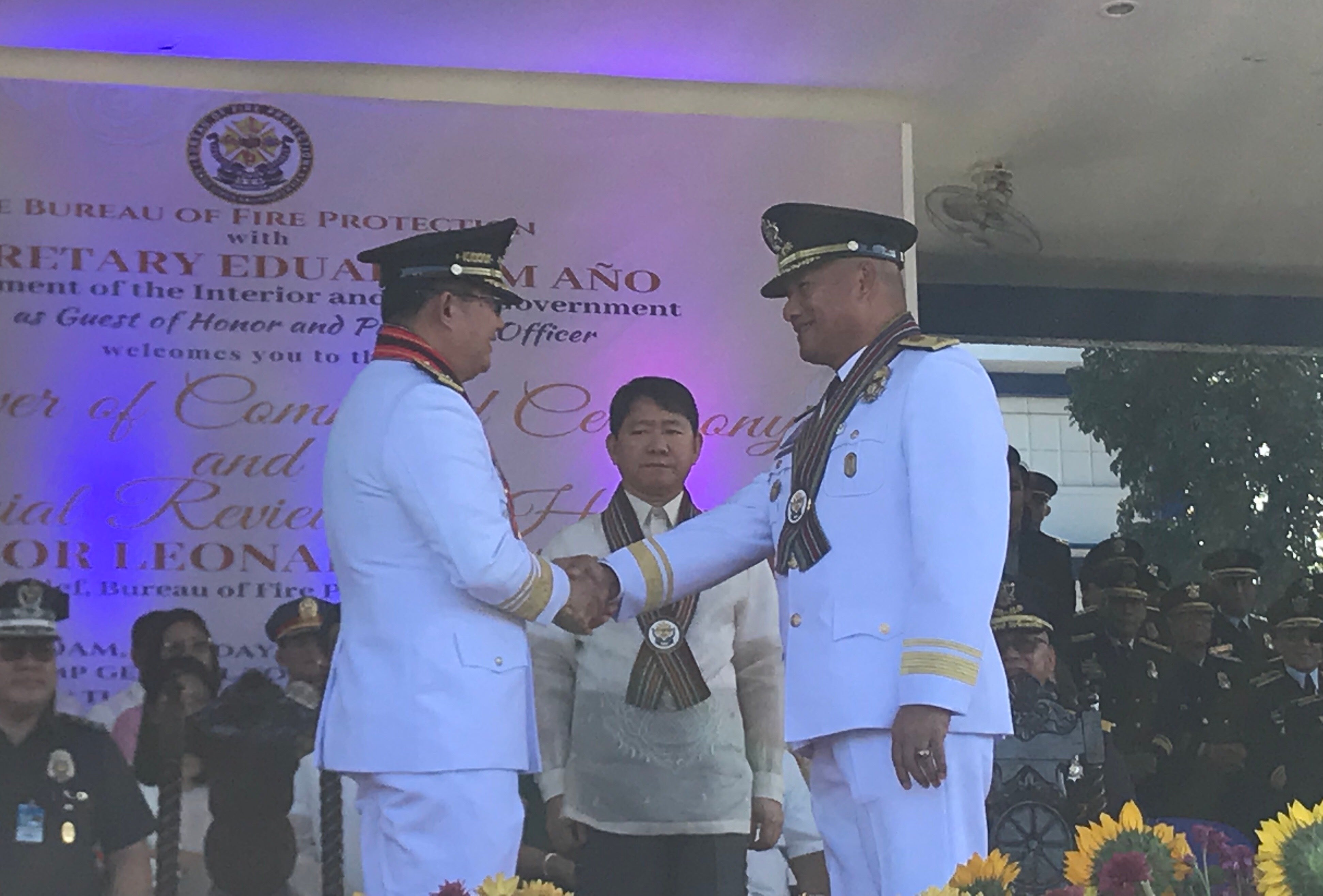 MANILA, Philippines — The newly-installed acting chief of the Bureau of Fire Protection (BFP) has vowed to end corruption and malpractices in the agency by incorporating technology in its frontline services to the public.

In his speech shortly after assuming the post, Fire Chief Supt. Jose Embang Jr. said his plans of action for the bureau includes the “eradication of corruption and malpractices [in the BFP] by the automation of frontline services, thereby minimizing physical contact with the client and speeding up transactions.”

He officially became the officer-in-charge of the bureau, replacing Fire Director Leonard Bañago, who retired from service upon reaching the mandatory retirement age of 56 on Tuesday.

Embang’s appointment was made official through a turnover-of-command ceremony presided by Interior Secretary Eduardo Año at Camp Karingal in Quezon City.

Speaking before firefighters, Embang, a member of the Philippine National Police Academy Tagapaglingkod Class of 1987 and formerly the BFP deputy chief for operations, said he was privileged to be appointed to lead the bureau.

“I consider it a privilege and a blessing to serve as officer-in-charge of the BFP as we close the decade in ushering 2020 with a clearer and stronger vision starting today. As we start this new decade, I would like to echo our philosophy: ‘We serve so that others may live,’” he said.

Marking his first day as officer-in-charge, Embang laid out his other plans for the agency, including restructuring and “reengineering” the organization “with the end view of having the right size of manpower with appropriate competencies.”

He added he also wants to enhance capability-enhancement programs in fire prevention, investigation, rescue, and medical services, as well as modernization of the BFP and the enforcement of the Fire Code of the Philippines in all special economic zones through agreements with various entities.

But even though Embang was only an OIC, Año vowed he would give him “all the authority” of a permanent chief. Año said his recommendation letter for Embang to be the official boss of the BFP is already on the table of President Rodrigo Duterte anyway.

Meanwhile, Bañago, who also received his testimonial honors in the same ceremony, reminisced his service of more than three decades as a fire official.

“Today, I realize how time flies. A few moments from now, I will be joining my family, loved ones, and my BFP predecessors in civilian life after 31 years and eight months, to be exact. I am now bowing out of service leaving the work I love so much,” he said.

“How we all wish we have more time, but my time here has ended. I know there are a lot of things yet to be done. However, I cannot stop time. I cannot press the hands of clock and release this moment forever. I cannot stay as much as I wanted. I must let go of this [position] I possess and let another chapter of my existence end naturally for another one to begin,” Bañago added.