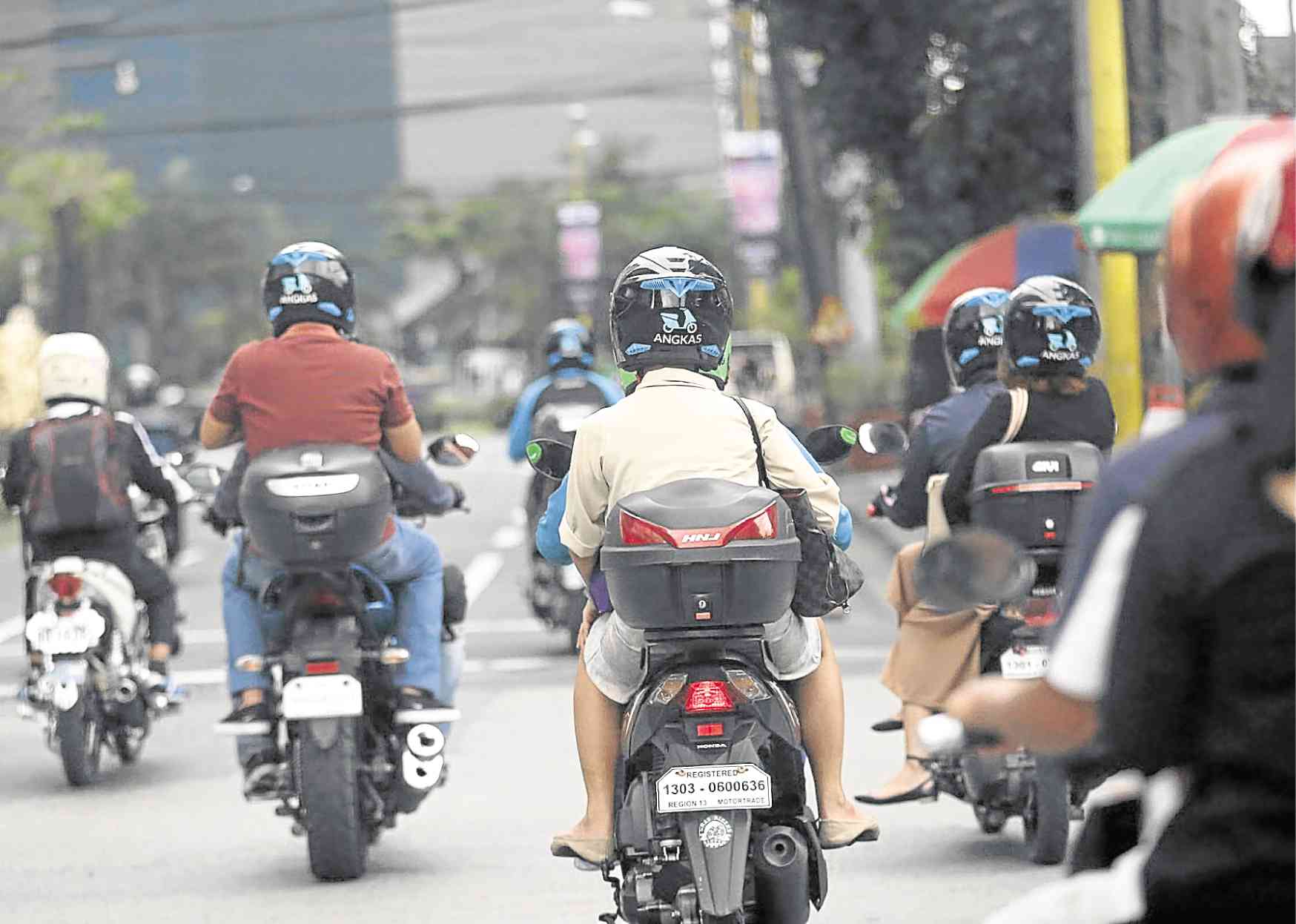 MANILA, Philippines — Issues surrounding motorcycle taxis like ownership as well as updates on the on-going pilot run will be raised in a hearing set next week at the Senate.

The Senate public services committee is scheduled to hold the hearing next Tuesday, January  14, on bills that seek to regulate motorcycles as safe and alternative public utility vehicles.

“The long lines of commuters waiting for rides leave no doubt that we need alternative public utility vehicles,” Senator Grace Poe, chair of the committee, said in a statement on Tuesday.

“We hope this hearing will help find solutions to issues on safety, legality and other questions that need to be threshed out towards an efficient transport system as a whole,” she added.

The senator said the hearing will tackle the four measures on motorcycle taxis filed by Poe and Senators Sonny Angara, Imee Marcos and Ralph Recto.

Poe said she would ask the Department of Transportation (DOTr) for updates on the pilot implementation of motorcycle taxis.

In June last year, a six-month pilot run was approved to aid Congress further evaluate pending bills seeking to legalize the use of motorcycles as public utility vehicles (PUVs). The pilot run was originally set to end on Dec. 26.

“The results of the pilot run will be an important guide for the committee in crafting the final version of the bill,” Poe said.

“Our ultimate goal is availability, safety and comfort for our riding public,” she added.

She said issues concerning ownership will be tackled during the hearing.

This, following allegations that some administration personalities have a stake in motorcycle-hailing firm JoyRide.

The company, however, assured that no government official is part of their management.

DOTr’s Technical Working Group (TWG), meanwhile, said that ride-hailing firm Angkas was “99.996-percent owned” by a Singaporean, in violation of Philippine laws that state common carriers must be at least 60-percent Filipino-owned.

The cap set by the government on the number of motorcycle taxis will also be discussed, Poe said.

A 10,000-biker limit for each transport network company was earlier imposed in the extended pilot run for motorcycle taxis.

The operators — Angkas, JoyRide and MoveIt, were given an allotted cap of 39,000 registered bikers — 10,000 bikers per transport network company (TNC) for Metro Manila and 3,000 bikers per TNC for Metro Cebu.

But a temporary restraining order issued by the Mandaluyong City Regional Trial Court on Monday halted for 72 hours the implementation of the government’s ceiling on the number of motorcycle taxis allowed to participate in the ongoing pilot run.

This after Angkas criticized the government’s move to impose a 10,000-biker limit as “anti-competitive” and “morally wrong,” adding that 17,000 of its biker-partners stand to lose their jobs. Its current workforce is at 27,000.

Under Poe’s Senate Bill 128 or the proposed Motorcycles-for-Hire Act of 2019, operators of motorcycle taxis may utilize online ride-hailing or pre-arranged transportation platforms.

When passed into law, it will amend Republic Act 4136 or the Land Transportation and Traffic Code.

Read Next
Fire razes residential-commercial building in Tondo
EDITORS' PICK
UK’s Boris Johnson will resign, BBC reports
Unemployment rate up to 6% in May
Geek out at TOYCON 2022 powered by Smart Signature
High inflation: Your P1 is now worth only 87 centavos
High-risk pregnancy: Reducing your risk is in your hands
House energy committee chair Arroyo bats for cheap electricity
MOST READ
Suspect in grisly killing of missing woman in Bulacan arrested
Kim Atienza’s daughter flaunts bikini body in response to critics of her ‘revealing photos’
Japanese artist who created ‘Yu-Gi-Oh!’ found dead in the sea
FDA probes popular Filipino noodle brand for ‘high level of ethylene oxide’
Don't miss out on the latest news and information.