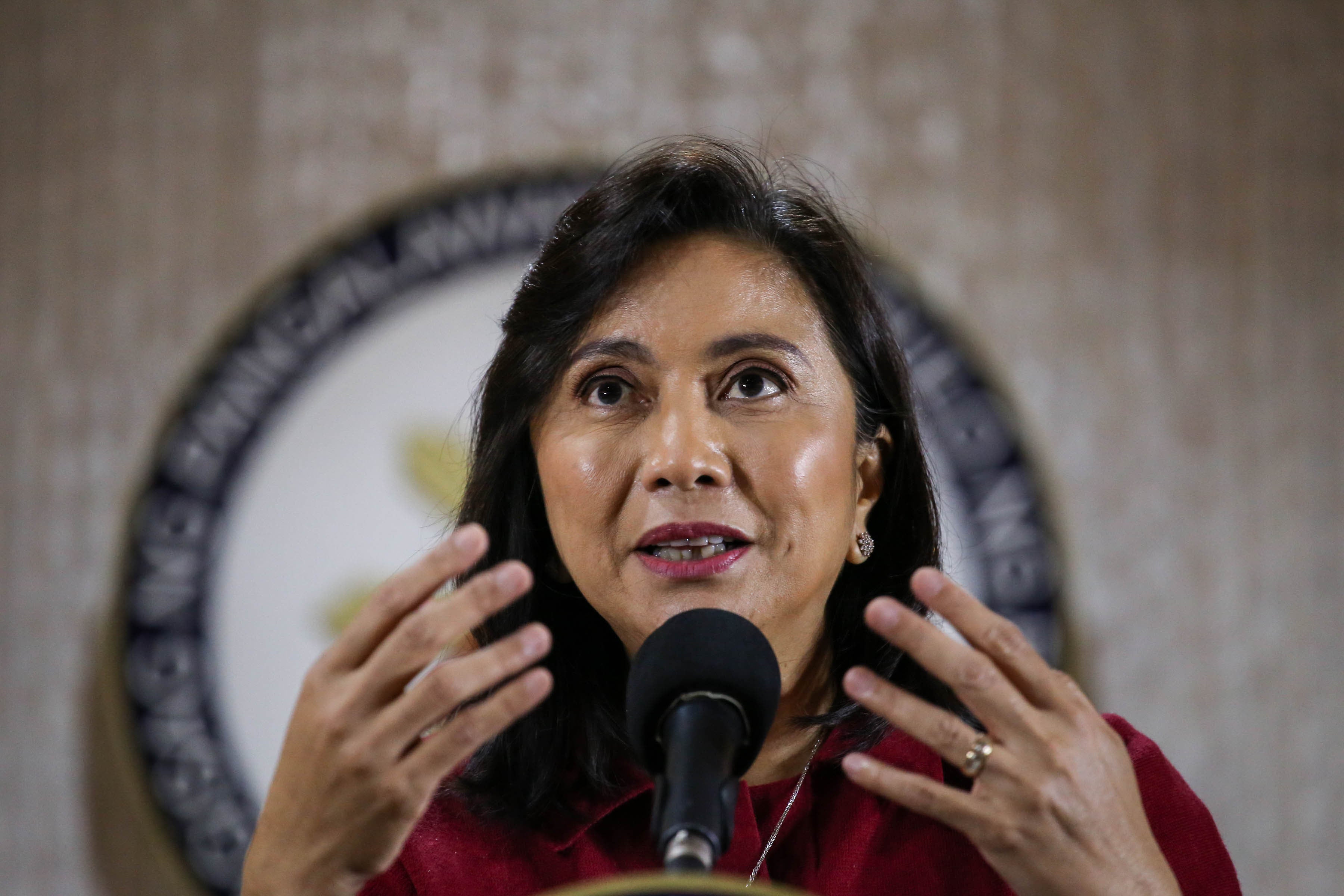 ROBREDO REPORT Vice President Leni Robredo reports on her 18 days as cochair of the Inter-Agency Committee onAnti-Illegal Drugs at her office in Quezon City on Monday. —JAM STA.ROSA

MANILA, Philippines — The Duterte administration’s war on illegal drugs is a failure, with the government barely making a dent on the country’s narcotics problem despite a relentless campaign over the past three years, Vice President Leni Robredo said on Monday.

Citing data from government agencies, Robredo said the authorities had seized only less than 1 percent of the total estimated consumption of “shabu,” or crystal meth, throughout the campaign.

Likewise, only less than 1 percent of drug money had been frozen by the government, out of the trillions of pesos that allegedly stemmed and circulated from the narcotics trade.

The measly achievement is part of the Vice President’s report on her stint as cochair of the Inter-Agency Committee on Anti-Illegal Drugs, which lasted for only 18 days because President Duterte sacked her for alleged incompetence.

Human rights groups, which have denounced the brutal campaign, lauded Robredo and her report, which called for a humane approach to the drug problem.

More than 6,000 people have been killed in police ope¬rations since President Rodrigo Duterte launched his war on drugs after assuming office in 2016.

The killings have drawn international condemnation, leading to the filing of information for crimes against humanity against Duterte and 11 of his officials in the International Criminal Court.

Duterte and his allies have denounced human rights groups for criticizing the program, clai¬ming significant gains in the battle against illegal drugs.

But data from the government itself clearly show that curbing the supply of illegal drugs has been a “massive fai¬lure,” Robredo said.

“It’s very clear that based on the official data, in spite of all the Filipinos killed and all the money spent, not more than 1 percent had been constricted from the supply of shabu and money earned from the drug trade,” she said.

“When she was threatening [to release] this report, she implied that she discovered some irregularities akin to a bomb exploding. It’s a dud,” presidential spokesperson Salvador Panelo told reporters.

“She didn’t say anything new. There’s nothing new in what she said,” he added.

Panelo dismissed Robredo’s conclusion that the drug war was a failure, saying, “I think the real failure was her assumption [of the post of cochair of the interagency panel on illegal drugs].”

“How can you say it’s a fai¬lure? It was not totally eradica¬ted because there are drugs co¬ming in, but we can still block those drugs. That’s why President Duterte is relentless,” he said.

Robredo said that according to the Philippine National Police’s Drug Enforcement Group, the approximate minimum consumption of shabu in the country per week is 3,000 kilograms, or about 156,000 kg a year.

The government also failed in recovering drug money, even though the Anti-Money Laundering Council managed to freeze P1.4 billion in assets related to illegal drugs from 2017 to 2018.

This was a paltry figure compared to the estimated P1.3 trillion in yearly consumption, Robredo said, citing the PNP’s estimate that, for shabu alone, the consumption value was P25 billion a week.

Unreliable data “Almost all of the funds were devoted to running after small-time pushers and users … Even if they do this every day, if they do not curb the supply and the big-time suppliers, the problem will never end,” Robredo said.

She said attention and resources were “disproportio¬nately focused” on street-level enforcement, neglecting the other significant aspects of the campaign.

Robredo assailed anew the absence of common and reliable baseline data, as well as a uniform process for tracking actions and interventions for users who have been arrested or surrendered to the government.

Again citing government figures, she said more than 1.2 million users had surrendered since 2016, while 300,000 had been arrested in police operations, for a total of 1.5 million.

“If we use the 4 million estimate of drug users and pushers, and only 1.5 million had been accounted for, where are the 2.5 million?” she asked.

Cluttered data would only translate to a cluttered campaign, Robredo said, adding that this would make determining if the program is working impossible.

In a statement, Aquino decried Robredo’s conclusion, saying she worked only “18 days as [interagency panel cochair] yet she has dismissed and ignored all of our government’s accomplishments and efforts for the past three years.”

“I see her recommendations as a mere political attack against President Rodrigo Duterte,” Aquino said.

He denied that the drugs data were inaccurate, saying the Dangerous Drugs Board (DDB) had “completed its survey and is now on the final phase of data gathering to once and for all update the data on drug users and pushers.”

The PNP officer in charge, Lt. Gen. Archie Gamboa has tasked all police units with compiling lists of the most notorious “high-value” drug suspects in their areas.

Gamboa told reporters on Monday that listing the top 10 high-value suspects would enable the PNP “to determine [who to target] in terms of priority.”

In a Viber message to reporters, Senate President Vicente Sotto III, a former head of the DDB, blasted Robredo’s assessment of the war on drugs, but acknowledged that she made “some valid points.”

Sen. Panfilo Lacson, who vo¬lunteered to be Robredo’s adviser when she served on the interagency panel on illegal drugs, said he would prefer to describe Duterte’s war on drugs as “not been successful enough rather than call it a failure.”

“[T]he war against illegal drugs is a continuing fight,” Lacson said in a text message to the Inquirer.

In her report, Robredo re¬commended the transfer of the interagency panel’s leadership from the PDEA to the DDB, sa¬ying the drugs board would be able to provide more oversight beyond law enforcement.

She also called anew for the scrapping of “Oplan: Tokhang,” which she said was implemen¬ted on Day 1 of the Duterte administration without operational guidelines.

“Because of this, it had se¬veral gaps and these allowed the system of abuses to happen,” she said.—With reports from Julie M. Aurelio, Jeannette I. Andrade and Marlon Ramos