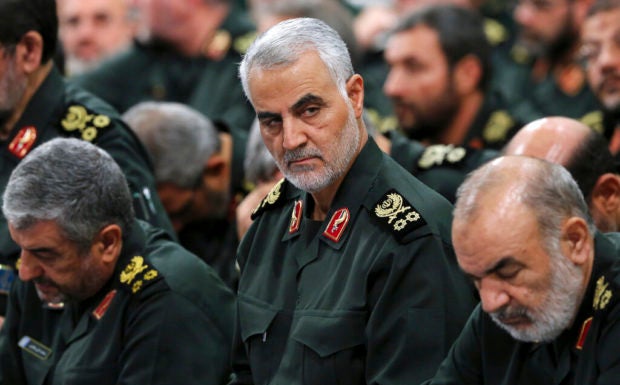 In this Sept. 18, 2016, file photo provided by an official website of the office of the Iranian supreme leader, Revolutionary Guard Gen. Qassem Soleimani, center, attends a meeting in Tehran, Iran. Iraqi TV and three Iraqi officials said Friday, Jan. 3, 2020, that Soleimani, the head of Iran’s elite Quds Force, has been killed in an airstrike at Baghdad’s international airport. (Office of the Iranian Supreme Leader via AP, File)

MANILA, Philippines — An international organization of lawyers has called on the United Nations Security Council to step in to stop US aggression and interference in the Middle East following the attack that killed Iranian Gen. Qassem Soleimani.

In a statement, the International Association of Democratic Lawyers (IADL), a Belgium-based organization with members from 50 countries and territories, also urged the UN-member states not to provide any political or logistical support for “for US acts of aggression or war crimes against Iran or any other country.”

The statement came following reports that the US is deploying more troops to the Middle East with the growing tension with Iran.

READ: More US troops off to Mideast; Iran slams Trump ‘act of war’

“IADL calls on the UN Security Council to immediately address the issue and take all necessary measures to put an end to all US aggressions and interferences in the Middle East and to maintain peace and security in the region,” IADL said.

Article 2.3 of the United Nations Charter requires all member states to “settle their international disputes by peaceful means in such a manner that international peace and security, are not endangered.”

Article 2.4 requires all member states to refrain in their international relations from the threat or use of force against the territorial integrity or political independence of any state, or in any other manner inconsistent with the purposes of the United Nations.

Only two exceptions are allowed — self-defense or when the use of force is authorized by the Security Council, neither of which applies to US President Donald Trump’s actions.

The United Nations Charter is a treaty which was ratified by the US and, by virtue of Article VI, section 2 of the US Constitution it has the force of domestic law.

“All countries of the world which have ratified the United Nations Charter have similar obligations,” IADL said.

The attack, according to the organization is a “targeted extrajudicial killing.”

Targeted killing is the intentional premeditated and deliberate use of lethal force by states or their agents acting under the color of law, who is not in the physical custody of the perpetrator.

If the person against whom lethal force is directed has not been convicted of a crime for which a death sentence is permissible in the state where the killing occurs, the targeted killing is also an extrajudicial killing outside of any legal process.

Read Next
It’s final: SC nixes plea for same-sex marriage
EDITORS' PICK
SM continues to send relief assistance to remote towns in Batangas
DOH: Second person ‘under investigation’ for 2019-nCoV in Tacloban City
China expands lockdowns to 25M people to halt viral outbreak
‘A greener, cleaner tomorrow’: A how-to guide for Filipinos who want to help with today’s energy crisis
Taal Volcano flexes signs of restiveness anew
Get exciting deals and discounts when you download the new McDonald’s App
MOST READ
PH to ‘start process’ of VFA termination — Locsin
172 Chinese tourists arrive in Bohol
Lacson on Duterte’s threat to end VFA over Bato’s canceled visa: Where is the connection?
DOH: Second person ‘under investigation’ for 2019-nCoV in Tacloban City
Don't miss out on the latest news and information.