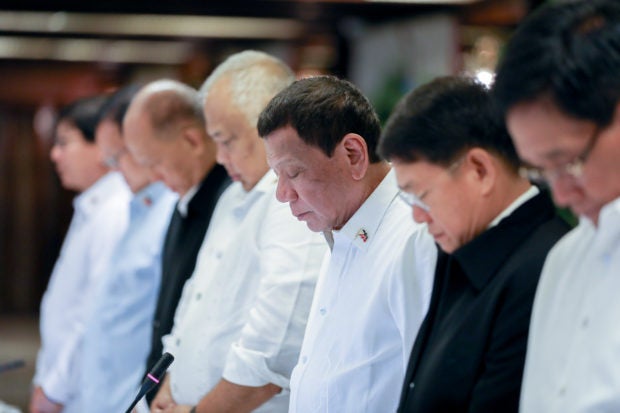 MANILA, Philippines—President Rodrigo Duterte admitted Monday he’s “nervous” that tensions between the United States and Iran may escalate into war and put millions of Filipino workers in the Middle East in danger.

“We do not know what could be the end result of this crisis. It could lead to a protracted war, it could be a widescale strike, whatever it is we Filipinos are really in peril. We have so many millions—nearing 3 (million) I think—of Filipinos working mainly in the Middle East,” Duterte said in his speech during the signing ceremony of the 2020 national budget in Malacañang.

“Kinakabahan ako (I’m really nervous). Iran seems to be hell-bent on a retaliation, which I think will come It’s a matter of time,” he added.

Duterte then asked Finance Secretary Carlos Dominguez to source out funds to be used to repatriate Filipinos in the Middle East once the situation there turns into open hostility.

“We need the money before it actually starts,” Duterte stressed.

The President has ordered the military to prepare its assets for the possible repatriation of OFWs in the Middle East after the US launched an airstrike that killed Iran’s top general, Qasem Soleimani, in Iraq.

Duterte acknowledged that it would be a “huge, gargantuan effort” to bring home all Filipinos who would be affected by an escalation of conflict in the region.

Based on the latest Philippine Statistics Authority (PSA) data, about 1.26 million OFWs in 2018 are in the Middle East or West Asia, which included Bahrain, Israel, Jordan, Kuwait, Lebanon, Saudi Arabia, Qatar, and the United Arab Emirates (UAE).
Duterte also called on Congress to hold a special session to tackle Middle East tension and the welfare of overseas Filipino workers in the region.

The Department of Foreign Affairs has already warned Filipinos against traveling to Iraq until further notice and asked Filipinos there to coordinate with the Philippine embassy and their employers in the event there is a need for mandatory evacuation.

Read Next
Palm reader fools client into paying $70,000 to exorcize demon from daughter
EDITORS' PICK
What’s at stake for every fighter at ONE: NextGen
Legarda emphasizes role of ICC/IPs in nation building this IP month
NCR’s COVID-9 alert level may be downgraded from 3 to 2 soon — DOH
Isko Moreno bares ‘two-pronged’ approach to rehabilitate MSMEs
Climate Change Commission and Nestlé PH to discover sustainability-focused solutions
Gordon calls 2 Pharmally execs ‘Senate fugitives’ after no-show in probe
MOST READ
Drivers with no traffic violations can now renew licenses for 10 years
LJ Reyes says Paolo Contis made ‘no efforts’ to talk to her after their split
Yang’s Princeton degree raises eyebrows among senators
Gordon to Duterte: You? Teaching me courtesy?
Don't miss out on the latest news and information.