Seoul officials on alert over heightened risk of US-Iran conflict 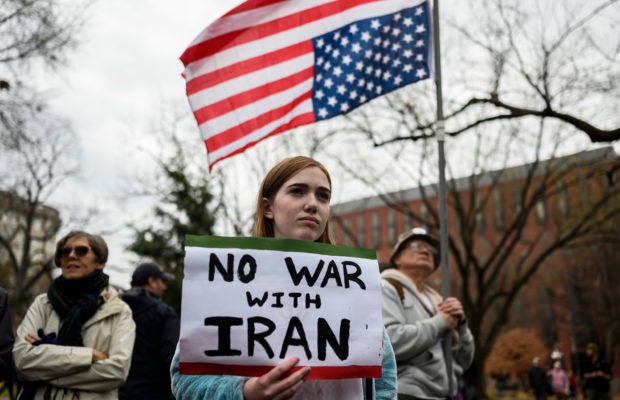 Anti-war activist protest in front of the White House in Washington, DC, on January 4, 2020. – Demonstrators are protesting the US drone attack which killed Iran’s Major General Qasem Soleimani in Iraq on January 3, a dramatic escalation in spiralling tensions between Iran and the US, which pledged to send thousands more troops to the region. (Photo by ANDREW CABALLERO-REYNOLDS / AFP)

SEOUL — Seoul officials said Sunday they were cautiously watching escalating tensions between the US and Iran and staying vigilant about the possible repercussions here.

The Ministry of Foreign Affairs has launched a task force to evaluate the current situation in the Middle East and to discuss measures to protect Koreans living in the area, the officials said.

On Friday, the US confirmed that President Donald Trump had ordered the airstrike that killed Qassem Soleimani — the head of Iran’s elite Quds Force and the second-most powerful man in Iran — which took place at Baghdad International Airport in Iraq. The attack has raised tensions between Washington and Tehran to new heights.

Presided over by Vice Foreign Minister Cho Se-young, the inaugural meeting of the task force was held Sunday morning.

Results of the meeting were reported to Foreign Minister Kang Kyung-wha, who directed the team to enhance the security of Korean citizens and businesses in the Middle East.

The ministry added that in coordination with the diplomatic offices in the region, it will maintain an emergency response system around the clock.