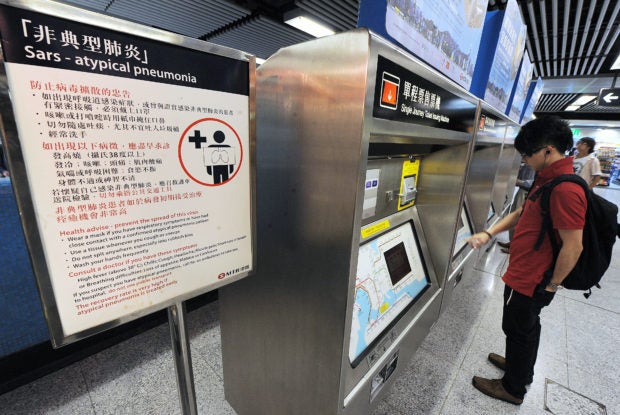 A notice (L) at a train station advises people about atypical pneumonia in Hong Kong on April 29, 2009. Hong Kong, at the forefront of the SARS epidemic in 2003 and already on alert for bird flu, has announced a series of tough measures to combat any threat from the speading swine flu which has been linked to at least seven deaths in Mexico. AFP PHOTO/MIKE CLARKE (Photo by MIKE CLARKE / AFP)

Speaking on an RTHK radio program, the Secretary for Food and Health Sophia Chan said two more people had fallen ill after returning from Wuhan, raising the total number of cases in Hong Kong to seven.

She said the government had decided to step up its monitoring of the situation after a meeting with experts on Friday, RTHK reported.

The serious response level is the medium level in a three-tier response system – alert, serious and emergency – for an outbreak of Novel Infectious Disease of Public Health Significance.

The government made the decision following the risk assessment of the cluster of cases of viral pneumonia with an unknown cause in Wuhan reported by the National Health Commission.

The tests on the exact pathogens and the search for the cause of the infections are underway. Common respiratory diseases such as influenza, bird flu and adenovirus infections have been ruled out.

A spokesman for the Center for Health Protection of the Department of Health said the current cluster of viral pneumonia cases in Wuhan can be regarded as a Novel Infectious Disease of Public Health Significance, which may cause human infection and has the potential to lead to international spread and public health emergency.

Read Next
Cebu City police destroy P1.5M worth of illegal firecrackers
EDITORS' PICK
MyCitiHomes premiers PH’s first 3-star certified BERDE District residential development
House energy committee chair Arroyo bats for cheap electricity
NATO to boost troops on high alert to over 300,000
Beyond the Chocolate Hills: A farm-to-table, heritage culinary adventure of Bohol
Congress should review hajj coordination program – Hataman
Protests discouraged but OK if not near inauguration site – PNP
MOST READ
Duterte: It was correct for Bongbong Marcos to ‘decline’ presidential debates
Peso breaches 55:$1, now Asean’s worst performer
Enrile contracts COVID and snipes at critics, foes: ‘I am not going to die yet’
PH firm partners with US corporation to set up weapons assembly in Bataan
Don't miss out on the latest news and information.