Hope for the crocs 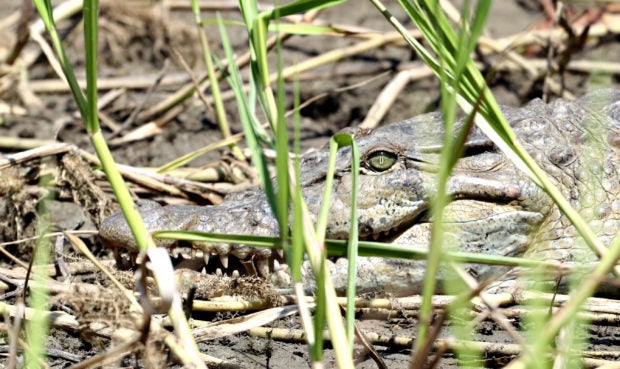 The Philippine crocodile (Crocodylus mindorensis) is among the local species categorized in the International Union for Conservation of Nature’s (IUCN) Red List of Threatened Species as “critically endangered,” with its population in the wild estimated at between 92 and 137 in 2012.

Its shrinking population has been attributed to loss of habitat and active human poaching driven by consumer demand for exotic leather.

But hope is not lost for the survival of this fearsome reptile.

Researchers recently found traces of a healthy population of the Philippine crocodile in Lanao del Sur province, indicating a possibility that individuals in the wild could be higher than previously thought.

For decades, since the early specimen of the freshwater crocodile from Mindoro Island was scientifically described in 1935, the Lanao provinces never appeared on scientific records for any sighting of the endemic reptile.

Records rather showed scattered populations of the crocodile in the Luzon provinces of Abra, Isabela and Cagayan (Dalupiri Island); in Lake Sebu, South Cotabato, and around the Liguasan Marsh in Maguindanao province in Mindanao.

IUCN referred to incidents in 1992 where subadult Crocodylus mindorensis were caught in Lanao del Sur, with one of these areas identified as Malabang town. Another catch of an adult Philippine crocodile was recorded in Lanao del Norte (locality and municipality unknown) that year.

Manalo said they found indications of a thriving crocodile population after a survey conducted near the connecting rivers of Maladi and Miundas from Dec. 10 to Dec. 12, 2019.

“This is not a new record nor a new discovery [of species],” Manalo said. “But a new population record is just as significant, so science will know how to respond.”

The Philippine crocodile is one of the only two species found in the Philippines — the other is the larger and more aggressive saltwater crocodile (Crocodylus porosus). Globally, there are only 28 known crocodile species.

Manalo, 47, said his team first came across reports of an adult Philippine crocodile in captivity in Lanao del Norte in November 2018. Residents informed them it was captured from Matling River in Malabang.

Manalo said they were doubtful at first about the crocodile’s presence in Lanao, as an adult could have just found its way there through illegal traders.

“During that time, things were also still unsettling for the community given the [ratification of the] BOL (Bangsamoro Organic Law) and the martial law, so we decided to set it aside for the meantime,” he said.

Lanao del Sur formed part of the Bangsamoro Autonomous Region in Muslim Mindanao that gained its autonomy through a plebiscite in early 2019.

Herpetologists describe the Philippine crocodile as “shy,” an exact opposite of the saltwater crocodile known for its tendency to attack human populations. An adult can grow to as much as 3.04 meters (10 feet) long, just about half the size of the saltwater species.

“This behavior, however, makes them an easy target of hunters,” Manalo said.

In November 2019, CPPI again received a report, this time from former forest ranger, Saino Pagayawan, that a juvenile crocodile (103 centimeters long) was captured in Maladi River.

“It’s a juvenile. That means they’re breeding, the population is alive,” he said.

CPPI gave a “conservative estimate” of 20 individuals in Malabang, although Manalo believed there could be a “hundred” more thriving in the wild.

It plans to explore the connecting Matling River for another population survey in March.

“Since 2017, we have been hearing reports of pockets of population of this particular crocodile but we never had the chance to investigate further. This recent discovery will open up new possibilities and research for the conservation of this species,” Manalo said.

In a 2018 interview with the Inquirer, National Scientist Angel Alcala, a leading expert on amphibian and reptile research in the country, raised the call for the protection and conservation of the Philippine crocodile.

“In the first place, there were just too few of them left in the wild. Wild population should be protected and should be a priority as the number of the Philippine crocodile is fast declining,” said Alcala, who served as secretary of the Department of Environment and Natural Resources from 1992 to 1995.He said these crocodiles played a big role in maintaining the balance of the ecosystem.

“Waste from these creatures provide much needed nitrogen and phosphorous to our plants and microorganisms. These, in turn, provide food to other forms of animals in the area—from small insects, birds, crustaceans and of course, fish—forming one big web of feeding chain,” Alcala said.

“These predators keep the food chain going, maintaining the ecological balance needed. That’s why in most areas with crocodiles, you also find an abundance of plants and animal species,” he added.

As the first Filipino scientist to engage in comprehensive study of Philippine reptiles and amphibians, Alcala felt an urgent need to step up efforts toward protecting the Philippine crocodile.

“Our Philippine crocodile is unique compared to other crocodilian species in the world. Unlike its common cousin, the saltwater crocodile, our crocodile is shy and very secretive and does not form groups. The only time they are with another crocodile is when they mate. If not protected, they will not be able to breed normally,” he said.

In a forum on Philippine crocodiles held at the University of the Philippines in Los Baños, Laguna, last year, Grahame Webb, chair of the Crocodile Specialist Group of the Species Survival Commission at IUCN, said among the issues affecting wildlife conservation was economics.

“It’s far more easy for governments to allocate money to the conservation of an animal that’s economically important and is supporting livelihoods than the one that is just disappearing but nobody really cares about it,” Webb said.

He said a “link between conservation and sustainable use and livelihood” should be established.

Crocodile leather is now being used for apparel and people have learned to cook and consume crocodile meat.

“People are opposed to an industry setup in the Philippines, saying this is not good for conservation. But lo and behold, it has turned out to be a very successful venture for the Philippines,” Webb said, referring to accredited crocodile farms in the country.

According to Theresa Mundita Lim, executive director of the Asean Centre for Biodiversity, there is a tendency for government to become overly restrictive when it comes to protecting wildlife.

“If we have that level of confidence, through science, that will provide us the information that so-and-so number of crocodiles may be harvested without affecting the ecosystem service that is provided by the swamp or the forest, then this is something that we need to explain [and] communicate to policymakers,” she said.

Communities and local governments can play a big part in crocodile conservation, according to Lim and Webb.

“The communities are only able to help us protect [wildlife] if they realize the benefit of what they are protecting,” Lim said.

“Crocodiles are tenacious survivors. Even though they’re in low density, if you give them a chance, they’ll recover,” Webb said.

—With reports from Kimmy Baraoidan and Romar Miranda