Trump: Aim of killing Iranian general was to ‘stop a war’ 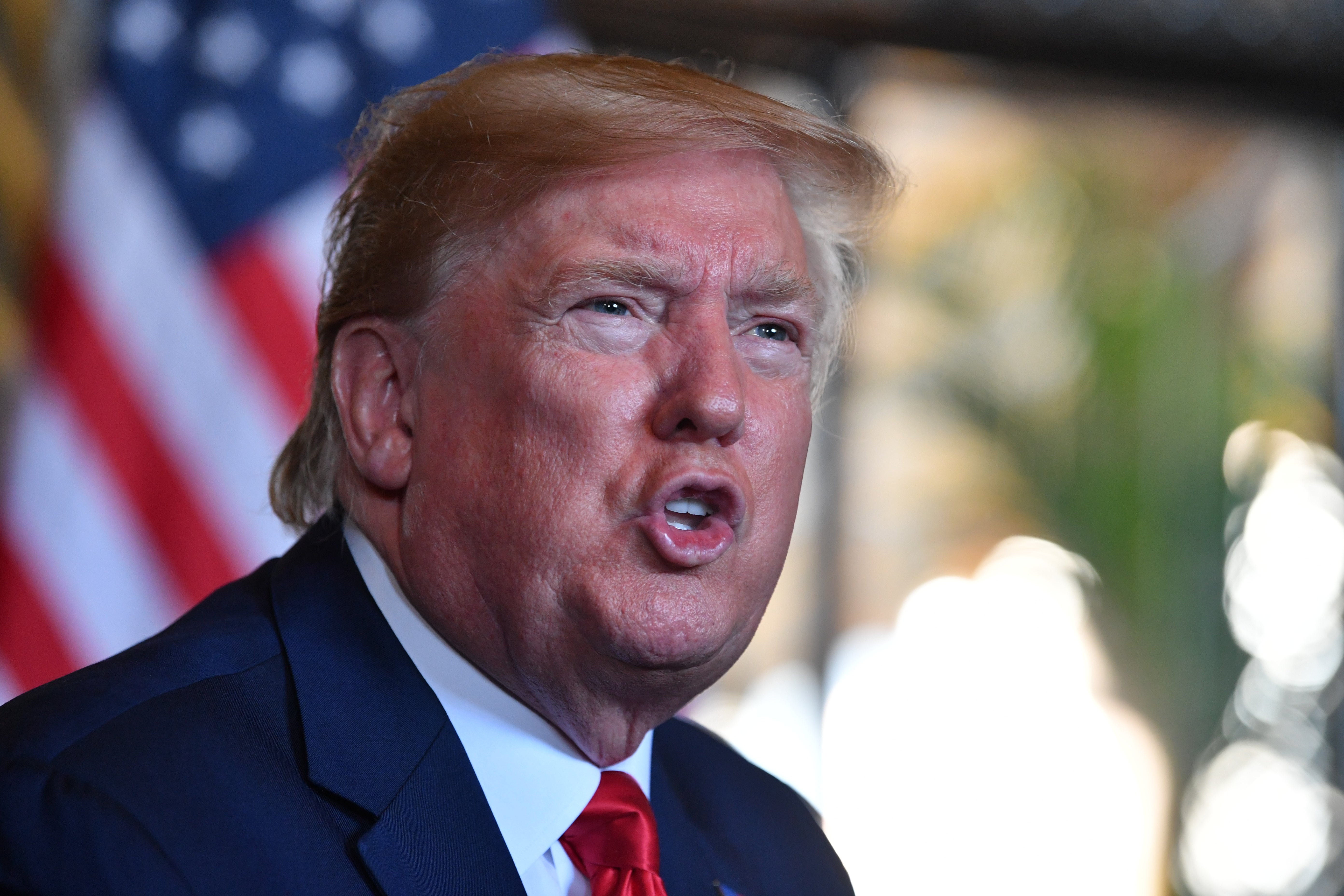 WASHINGTON  — President Donald Trump said Friday he ordered the killing of a top Iranian general “to stop a war,” not start one, but in the tense aftermath the Pentagon braced for retaliation by sending more troops to the Middle East. Democrats complained that Trump hadn’t consulted Congress, and some worried that the strike made war more likely.

Secretary of State Mike Pompeo argued the U.S. case with allies in the Middle East and beyond, asserting that Friday’s drone strike killing Gen. Qassem Soleimani was a necessary act of self defense. He asserted that Soleimani was plotting a series of attacks that endangered many American troops and officials across the Middle East.

The ramifications of Trump’s decision to kill Soleimani were still coming into focus Friday; they could include an end to the U.S. military partnership with Iraq in fighting the Islamic State extremist group. Some Iraqi politicians called the attack, which also killed an Iraqi general, a violation of Iraqi sovereignty and questioned whether U.S. forces should be expelled. The U.S. has about 5,200 troops in Iraq, mostly to train and advise Iraqi forces fighting IS.

In brief remarks to the nation, Trump said the Iranian general had been plotting “imminent and sinister” attacks. At the Pentagon, Army Gen. Mark Milley, chairman of the Joint Chiefs of Staff, said the U.S. had “compelling, clear, unambiguous intelligence” of Soleimani plotting violent acts.

“Oh, by the way, it might still happen,” Milley said, referring to the planned attacks.

Trump called Soleimani a ruthless figure who “made the death of innocent people his sick passion. … We take comfort in knowing that his reign of terror is over.”

The president warned Iran against retaliating. He said the U.S. military has Iranian targets “fully identified” for counter-retaliation. The U.S. has a wide range of offensive and defensive forces in the Gulf area within range of Iran.

Asked about possible retaliation, Milley told reporters, “Is there risk? You’re damn right there’s risk.” He added, “There is a range of possible futures here, and the ball is in the Iranian court.”

As Iran warned of “harsh” reprisals, the U.S. Homeland Security Department watched for trouble brewing on the domestic front and reported “no specific, credible threats” in the first hours after the American attack in Baghdad, said the department’s acting secretary, Chad F. Wolf.

Senior State Department officials, in a briefing for reporters, said the drone strike near the Baghdad international airport was based on intelligence that suggested Soleimani was traveling in the area to put final touches on plans for attacks that would have hit U.S. diplomats, troops and American facilities in Iraq, Lebanon, Syria and elsewhere in the Mideast. The officials, who spoke on condition of anonymity under State Department ground rules, would not be more specific about the intelligence but said it clearly called for a decisive U.S. response.

“I think the jury’s out on that,” Warner said. “I hope they’re successful on that. I think it could have brought in more congressional leaders and allies to help make that case ahead of time.”

Rep. Adam Schiff, a California Democrat, said he has not heard a satisfactory explanation for the timing of the U.S. attack.

“And the question is why the administration chose this moment, why this administration made the decision to remove him from the battlefield and other administrations, both parties, decided that would escalate the risks, not reduce them,” he said.

Fears about the repercussions of killing Soleimani persisted throughout the administrations of President George W. Bush, a Republican, and President Barack Obama, a Democrat, according to officials who served under both. Soleimani, they calculated, was just as dangerous dead and martyred as he was alive and plotting against Americans.

A decades-long U.S. nemesis, Iran holds a range of options for striking back, militarily or otherwise. Tens of thousands of American troops in the Persian Gulf area, including in Iraq and Qatar, are within easy range of Iranian missiles, and Iran has the capability to act more clandestinely with cyber attacks or military proxy strikes on U.S. targets abroad.

Last summer, following a string of intelligence indications that Iran was planning attacks on U.S. targets in the Gulf area, the Pentagon accelerated the deployment of an aircraft carrier to the region and deployed additional missile defenses. In all, about 14,000 additional U.S. troops were sent to the area over the summer and fall, but that did not deter Iran, which is feeling an extreme squeeze from U.S. sanctions that have all but shut off its oil exports.

The final sequence of actions leading to the killing of Soleimani began in October with rocket attacks in Iraq that Washington blamed on Iran-supported Shiite militias. A Dec. 27 rocket attack near Kirkuk killed an American contractor and wounded U.S. and Iraqi soldiers. The U.S. blamed an Iran-backed militia called Kataeb Hezbollah, or KH, and on Dec. 29 it bombed five KH-linked facilities. Two days later, KH militiamen and their supporters stormed the U.S. Embassy compound in Baghdad, an attack Trump cited as evidence that Soleimani deserved to be eliminated.

“The Iranian regime’s aggression in the region, including the use of proxy fighters to destabilize its neighbors, must end and it must end now,” Trump said.

Trump’s final pre-strike consultations were held behind the palm trees at his Mar-a-Lago club in Palm Beach, Florida, where the president has spent two weeks largely out of sight before his impeachment trial in the Senate. In the days before the attack, Trump huddled with aides, including Pompeo and his national security adviser, Robert O’Brien.

After the Soleimani killing, Pompeo announced that he was placing the Iran-backed Iraqi militia Asaib Ahl al-Haq on the State Department’s “foreign terrorist organization” blacklist, which blocks any assets the group may have in U.S. jurisdictions and bars Americans from providing it with material support.

The Pentagon was largely silent Friday on details of the drone strike and its aftermath. Officials announced the deployment of nearly 3,000 additional soldiers from the 82nd Airborne Division at Fort Bragg, North Carolina, to Kuwait as reinforcements. Separately, the 173rd Airborne Brigade, based in Italy, had been placed on alert for possible deployment of parts of the brigade to Lebanon to help defend the U.S. Embassy in Beirut.

The additional troop deployments reflect concerns about potential Iranian retaliatory action. But they also run counter to Trump’s repeated push to extract the United States from Mideast conflicts. He has repeatedly called for withdrawing from Syria and Afghanistan, but over the past year he has greatly increased U.S. troop totals in the Middle East.

More broadly, some congressional Democrats and national security analysts questioned whether the Trump administration is prepared for Iranian retaliation and the prospect of political backlash in Iraq, where American troops are working with Iraqi forces in a sometimes tense partnership against the Islamic State extremist group. The Pentagon said it wants to sustain that work, but some Iraqi leaders said it might be time for U.S. troops to leave.

In Baghdad, Prime Minister Adel Abdul-Mahdi condemned the American drone strike, which also killed an Iraqi general who was deputy commander of the Iranian-backed militias in Iraq known as the Popular Mobilization Forces. Abdul-Mahdi called the killings an “aggression against Iraq.” An emergency session of parliament was called for Sunday, and the deputy speaker, Hassan al-Kaabi, said it would make “decisions that put an end to the U.S. presence in Iraq.”

Ordering out American forces would heavily damage Washington’s influence and make the U.S. troop presence in neighboring Syria more tenuous. But Iraq’s leadership is likely to be divided over such a step. President Barham Salih called for “the voice of reason and wisdom to dominate, keeping in mind Iraq’s greater interests.”