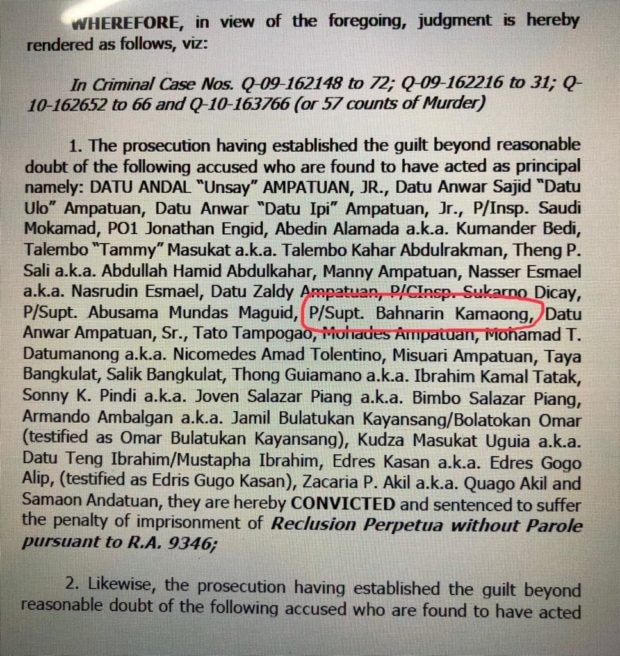 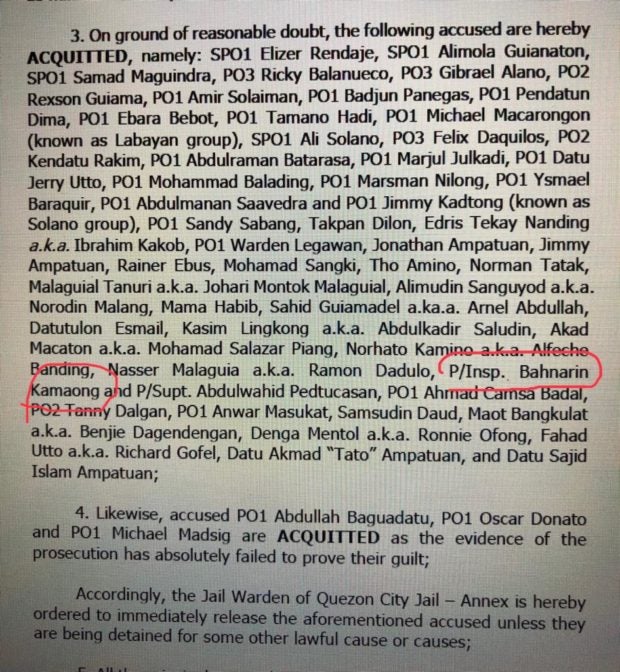 MANILA, Philippines–An accused in the Maguindanao massacre case whose name appeared as both convicted and acquitted went to the Court of Appeals and asked for his immediate release.

Bahnarin Kamaong filed a petition for habeas corpus saying that Quezon City Regional Trial Court Branch 221 has yet to act on his motion for immediate release despite his acquittal.

Habeas Corpus means “that you have the body” while “writ” is a court order. The Writ of Habeas Corpus requires an official to produce before the court a detained person and justify why he needs to be restrained. Failure to justify the legality of the detention would mean the detained person’s freedom.

Kamaong, in his habeas corpus petition, said the lack of action on the part of the QC Court on his immediate release despite his acquittal “shall be deemed a denial of the same.”

He said his family, relatives and even the public have watched the promulgation of the Maguindanao massacre case where his name was announced as one of those acquitted.

Kamaong said subjecting him “to continuous incarceration despite acquittal is inconsistent with the Order given in open court on Dec. 19, 2019.”

He said he has been put “in a state of embarrassment, shame, public humiliation and persecution which is tantamount of compelling him to live in the continuing state of insecurity, anxiety and awkward situation.”

Kamaong said the court already stated that the evidence against him was insufficient to warrant his conviction and there was no scintilla of evidence linking him to the death of the 58 personalities.

Based on the 761-page decision by the QCRTC, a certain Superintendent (now Lieutenant Colonel based on the new police rank classification)  Bahnarin Kamaong is among the 28 convicted for the death of 57 people including 31 journalists. He is meted with the penalty of reclusion perpetua without parole.

The convicted Kamaong is identified in the decision as the Regional Commander of the Philippine National Police’s Regional Mobile Group who offered his troop for the ambush.

However, the same ruling mentioned a certain Police Lieutenant Bahnarin Kamaong as one of those acquitted and ordered the immediate release.

In the original charge sheet filed by government prosecutors before the Quezon City Court, there is only one Bahnarin Kamaong as accused–the one with the rank of Lieutenant Colonel.

Justice Secretary Menardo Guevarra and Senior Deputy State Prosecutor Richard Anthony Fadullon both said that it is a matter for the court to clarify.

“Lets clear it up with the court,” Guevarra said.

While Fadullon said, “it was a matter brought to the attention of the court and the court had also mentioned that it would try to see to reconcile if there was any discrepancy in the decision.”