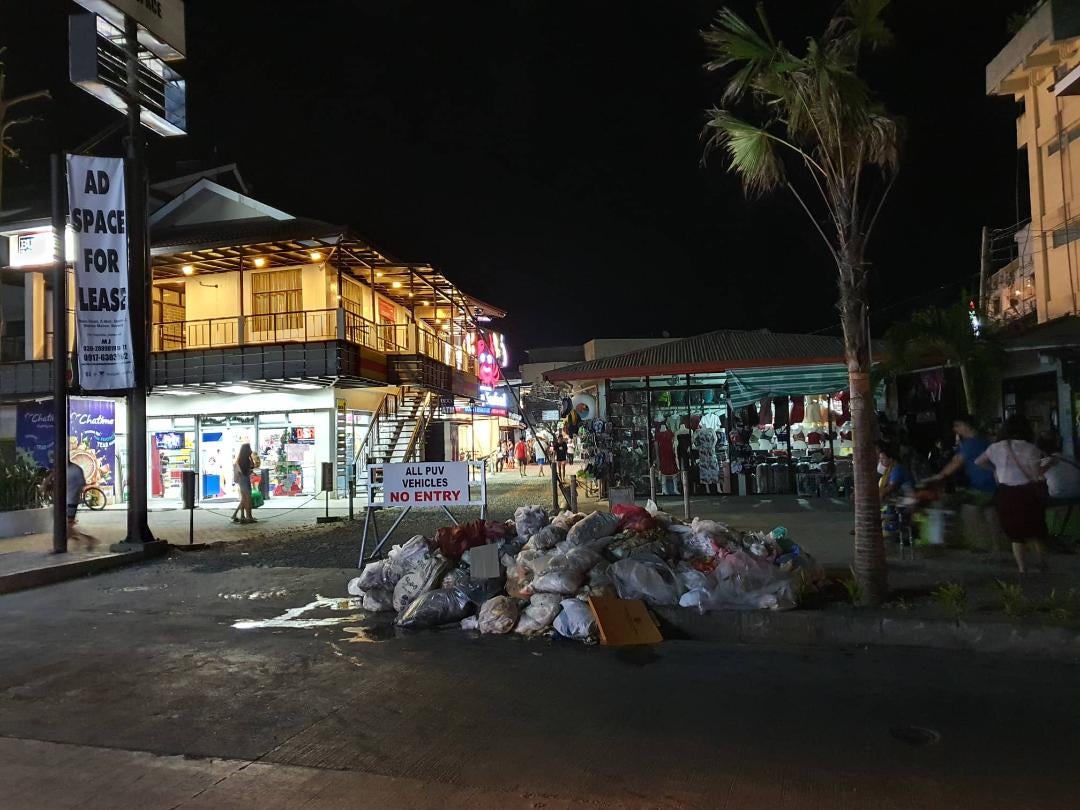 NO COLLECTION Bags of trash are left uncollected in a spot surrounded by shops, restaurants and hotels on Boracay Island in Aklan province a week after Typhoon “Ursula” battered the Visayas. —CONTRIBUTED PHOTO

ILOILO CITY—Typhoon “Ursula” (international name: Phanfone) swept through the Visayas on Christmas Eve, leaving Boracay Island with damaged houses and buildings, flooded communities and power outages that also led to fuel shortage due to the use of generator sets.

But Boracay, which relies heavily on tourism for its economy, is facing another problem as uncollected garbage starts to pile up on street corners, by the roadsides and in other areas on the resort island in Aklan province.

Residents and business operators have taken to social media to air their anger over the mounting trash amid a peak tourist season when hotels and resorts are booked.

“Outrageous! Where are the government officials and agencies for the past week? Garbage collection cannot afford a vacation,” a resident told the Inquirer.

Another resident and business operator said collection of garbage started only Thursday morning, a week after the typhoon hit the island.

The 1,032-hectare island generates 67 tons of trash daily, according to the government’s Boracay Action Plan.

In a statement on Thursday, the municipal government of Malay, which includes the three villages on the island, said the typhoon “disrupted” the delivery of services of the local government.

“The LGU (local government unit) of Malay [has] already coordinated with different haulers in the municipality to augment the [collection] of waste and debris left by the typhoon. In addition, we have coordinated with capable establishments in the [town] to assist us as part of their social responsibility,” according to the statement.Lack of manpower

“We are still reminding everyone that burning of garbage/debris is prohibited by law,” it said.

The Department of Environment and Natural Resources (DENR), which leads the Boracay Inter-Agency Task Force, dismissed claims that it had neglected the collection of garbage, as well as the debris left in the wake of Ursula.

In a press briefing on Wednesday, Antiporda said the delay in collection was “not because of the holidays, but because [the collectors] were victims of Ursula, too.”

He said that despite the lack of manpower, some haulers had already started mobilizing on Dec. 29, noting that Boracay’s Stations 1 and 3 had already been cleared of trash and debris.

“We were also unable to immediately clean up due to the shortage of trucks. Our trucks in Boracay that would have been used to haul trash were also inundated,” he said, adding that six trucks had been sent from Malay mainland to assist in clearing operations.

Antiporda said the task force was closely coordinating with the local government to address the garbage situation. He said pollution control officers had also stepped up to conduct clearing operations.