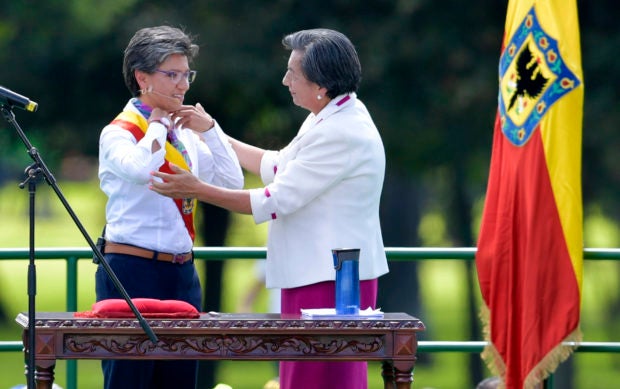 Bogota’s incoming Mayor Claudia Lopez (L) gets get mayoral sash during her inauguration ceremony in Bogota on January 1, 2020. AFP

The center-left mayor, who married her same-sex partner last month, takes over a city that has become a focal point of countrywide protests against the rule of right-wing President Ivan Duque.

Lopez, 49, broke with tradition and held her inauguration event in the city’s Simon Bolivar park attended by hundreds of people.

“Thank you to all for accompanying me in this special moment of my life by taking me as the first woman — diverse woman — elected as mayor in the history of Bogota,” she told the cheering crowd.

Lopez’s election in October was one of a series of setbacks for Duque’s ruling Democratic Center party, which lost control of several major cities and many see her as an emerging challenger to his presidency.

With seven million inhabitants, Colombia’s capital has been the main focus of a series of mass protests against Duque’s rule that have rocked the country for the past six weeks.

The city is home to a quarter of the 1.6 million migrants who fled the economic crisis in neighboring Venezuela to take refuge in Colombia.

The new mayor presented “an agenda of change” for her four-year term, focused on the fight against insecurity and the city’s traffic congestion, while promoting jobs and quality, free education. She also promised a “greener” Bogota under her mayorship.

She called on Bogotans to build a citizen’s culture that “once and for all banishes all racism, classism, machismo and zenophobia” from its streets.

“Bogota, thank you very much for trusting me with your present and your future. I promise to honor that trust, and give everything of myself so that our Bogota will be in the next four years a more caring, inclusive and sustainable city and region,” she said.

Lopez married her partner Angelica Lozano, a senator, on December 16.

She first stepped into the national spotlight after helping to expose links between Colombian lawmakers and right-wing paramilitary groups.

She was briefly forced to flee the country after the scandal came to light but returned to be elected senator in 2014 and stood as a vice presidential candidate in last year’s national elections.

Lopez won the October 27 mayoral poll with just over 35 percent of the vote in a narrow triumph over liberal Carlos Fernando Galan.