128,000 deaths occur in Pakistan due to climate change every year | Inquirer News

128,000 deaths occur in Pakistan due to climate change every year 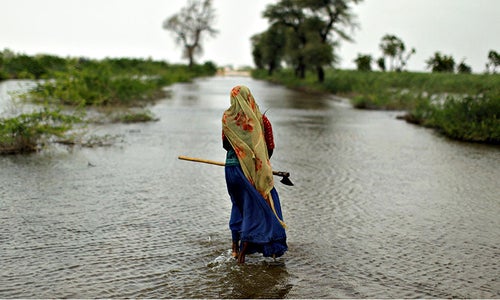 Members of a parliamentary committee were shocked to learn on Monday that 128,000 people die due to climate change in Pakistan. AP via Dawn/Asia News Network

ISLAMABAD — Members of a parliamentary committee were shocked to learn on Monday that 128,000 people die due to climate change in Pakistan.

Members of the Senate Functional Committee on Human Rights were also told that the average age or lifespan could decrease by two to five years because of environmental pollution.

The senators were informed that 43 percent of pollution in the country is caused by low grade oil being imported and used by the transport industry and energy sector, and Pakistan cannot use environmentally friendly fuel until 2021.

They were particularly upset to learn that Pakistan’s last oil sector policy came in 1997, and no one has formulated a new policy since that is at par with advancements in technology, development and other requirements.

The committee, chaired by PPP Senator Mustafa Nawaz Khokhar, took up climate change after the emergence of smog in Lahore.

Climate Change Additional Secretary Joudat Ayaz told the committee that 128,000 deaths occur annually that are directly or indirectly due to climate change.

In addition, he said, children are becoming weaker in fighting organ diseases.

He said that 43pc of pollution in Pakistan “is due to low grade oil being imported and used by the transport industry followed by the energy sector.”

“In Pakistan, Euro-2 standard is applied while the world has gone to Euro-6 technology,” he added.

Almost 9 percent of the GDP is affected by climate change, related to low yields and health expenditure, the senators were told.

He said there needs to be strong coordination between the federation and the provinces and standards should be uniform nationwide.

The country’s five oil refineries are still primitive and in their infancy, and our oil has high magnesium and sulphur contents that are harmful to health.

Mr Ayaz said the last refining sector policy came in 1997, and no upgraded framework has emerged since.

However, the ministry has issued regulations and directives to refineries from time to time regarding upgrading technology and usage.

He added that going to Euro-4 and Euro-5 would be counterproductive if vehicles are not upgraded with regular inspections. Tail end emissions and fuel quality need to be considered simultaneously, he said.

The committee directed all the relevant departments to bring written responses and recommendations on the issue so that informed discussions can be held and subsequent actions proposed with respect to legislation and policy.

Senator Khokhar told Dawn that he took notice of this issue because of the smog in Lahore, but also wanted to discuss it because Pakistan is the fifth most vulnerable country to climate change.

“Age span is increasing across the globe but it is feared that it will reduce from two to five years due to pollution in Pakistan. The Punjab government has informed us that 43pc pollution is generated due to the transport sector in Lahore. On the other hand, the frustrating issue was that we could not formulate policy for the oil and petroleum sector since 1997, [while] oil refineries have not bothered to upgrade themselves,” he said.

He said India has shifted to Euro-6 oil while Pakistan is still using Euro-2 oil, but added that it would not be beneficial to introduce Euro-6 fuel unless the automobile sector begins using engines that are suited to this kind of fuel.

“We have also decided to call automobile sector representatives. Pakistan State Oil (PSO) has made an agreement that it would buy the same fuel till 2021 due to which we are not in a position to change the fuel at once as it will be considered violation of the agreement by PSO,” he said.

“The situation is very tricky in Pakistan and we are running out of time. We have to find some solution if we really want to save the future of the next generations,” Mr Khokhar said.