A perya in Pasig 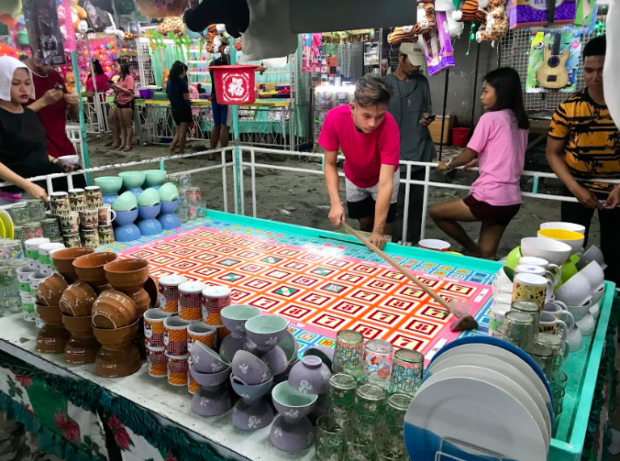 Just a short distance past the Pasig City Hall, a brief walk from the mega market, a perya had been erected for December’s festivities. From afar, perya-goers would have a sense of what awaits them in the “fiesta carnival” just from listening alone. One could hear the waxing and waning screams of people on the Viking ride amid blaring jeepneys rushing past on Caruncho Avenue — and if they strained their ears hard enough, they just might catch the bingo caller hollering numbers to no one in particular.

The fiesta carnival in Pasig, one of the few peryas that can be sighted in Metro Manila around this time, was set up in line with the Feast of the Immaculate Conception, celebrated annually on Dec. 8. And while it is easy to think that the perya would be sparse on a weekday, such was not the case on Monday night, when families and friends, young lovers, students, people who had just gotten off work, and officers from the nearby Eastern Police District Office, checked out the scene. 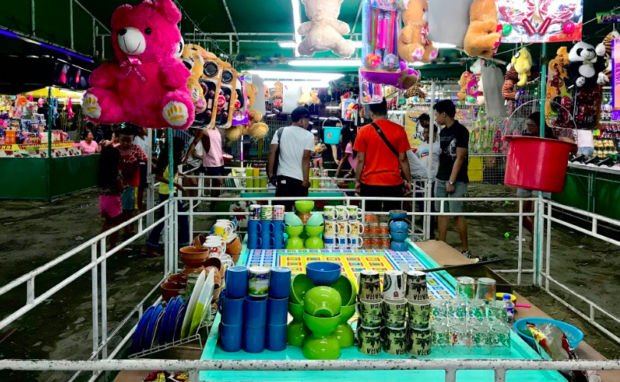 There is something phantasmagoric about what exactly the perya offers to the public. Any idler with no intention to consume would have a field day just walking around its grounds observing, yet even those on a budget could have a ball in the name of good fun for a mere P20 to P40.

Apart from the rows of tables reserved for social bingo, there are booths for various games and rides, such as hit-the-can, shoot-the-ball, balloon pop, and coin toss, as well as a horror house, the Spider, and the default carousel. Prizes range from snacks and wallets, plates and mugs, to dolls and stuffed toys bought from Divisoria. A person or two mans each booth, often youths, and often standing on their feet for a good amount of time as they attempt to attract customers, almost desperately, to play their games. 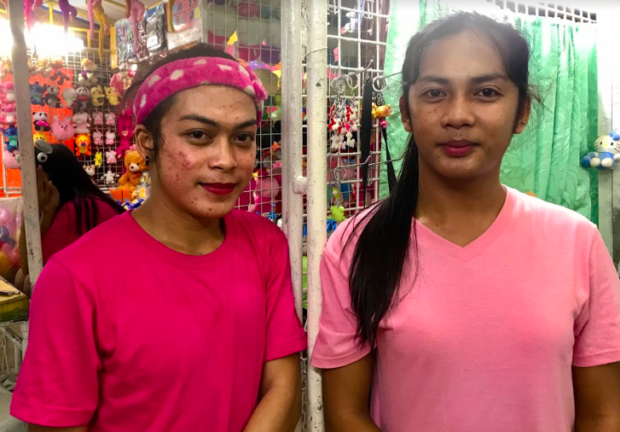 Twenty-two-year-old Jayven, clad in a pink shirt with matching pink headband and fuchsia lipstick, looks after a balloon pop booth. Jayven is familiar with the inner workings of a perya after stumbling into the job in 2015. He used to just go to the perya for fun, he said, but was eventually hired by the amusement operators to work in its booths.

(I only joined my friends until such time that I realized I enjoyed working in the fair. It’s great, but it’s also hard work. It’s usually like that). 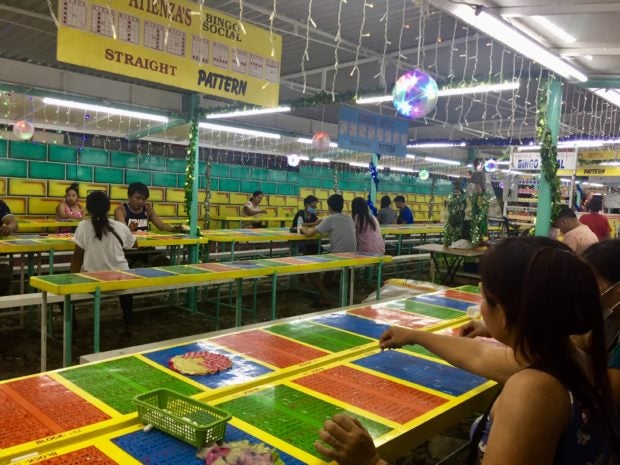 Jayven lives in Laguna, but is usually away in some place else depending on where, and how long, the perya takes him. During the holidays, it can be expected that more peryas would be setting up around the metro and the provinces, and so Jayven is currently working stay-in. 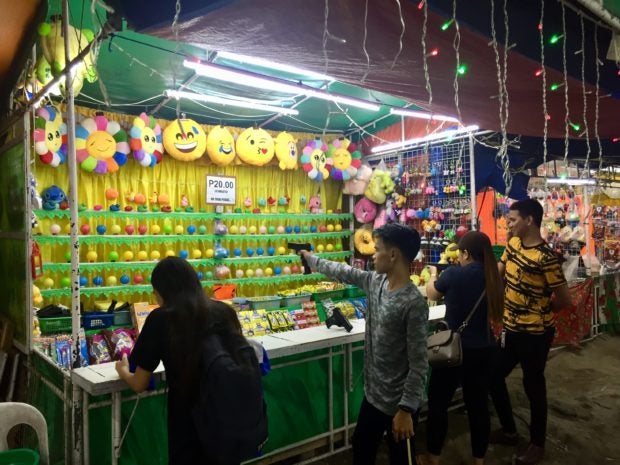 The pay isn’t so bad, too, said Jayven, although it is still below minimum wage. It is known that the daily pay in Metro Manila is P537, following a P25 increase in basic pay and the integration of the P10 living allowance through Wage Order No. NCR-22, November 2018. Jayven earns more than half of this on a normal day. 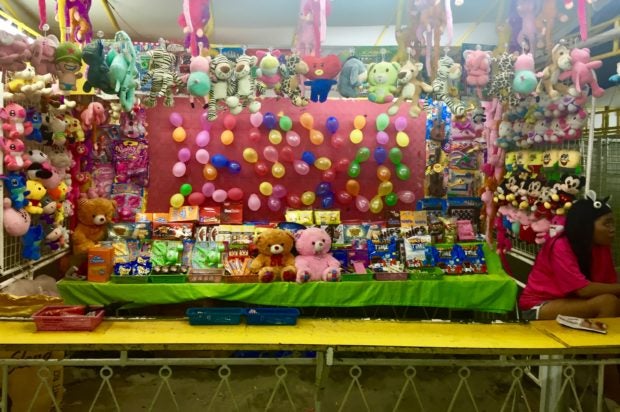 The perya has long been ingrained in Philippine culture and society, often in tandem with fiestas that celebrate events in the life of Christian and biblical figures such as Jesus and Mary, as well as saints of the Roman Catholic faith. The fiesta and the perya became that of the Filipinos’ just as much as they were Spain’s during the colonization of the Philippines in the 16th century. It even became a symbolic setting of society’s ills in the fourth chapter of Rizal’s “El Filibusterismo” which took place in a perya in Quiapo. during the Feast of the Black Nazarene. 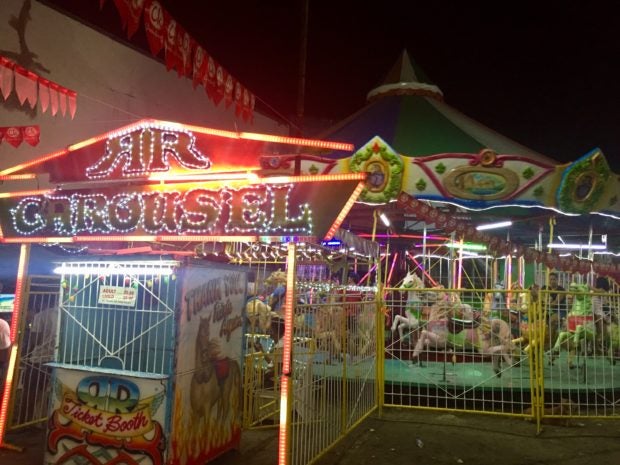 Through the years, more and more amusement parks sprouted in the Philippines, the most popular being Enchanted Kingdom and Star City; the latter was razed by an unforgiving fire last October. The bigger and better amusement parks seemed to have more to offer, such as themed, high-tech and arguably safer rides, but what the perya appears to lack in sophistication, it makes up in nostalgia, charm and accessibility.

There are not as many peryas now as before, lamented Jayven, but it is a sight, still, that people continue to look for during fiestas and the holidays. 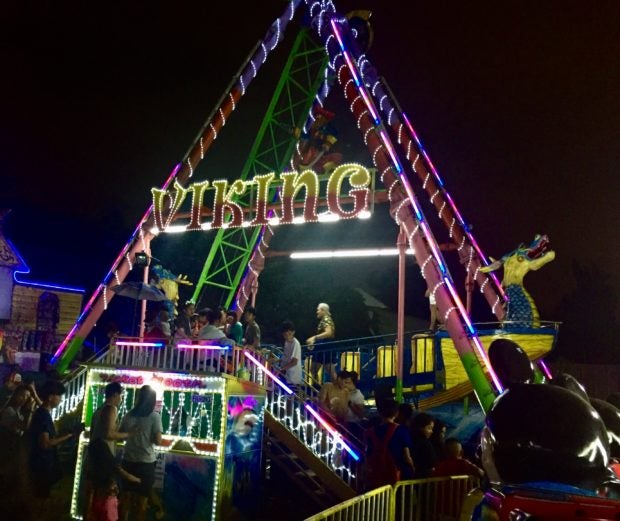 (What the ordinary people are used to is still different, when there are real carnivals. It’s different in the perya… Here you have bingo, there are many things they can do to amuse themselves and where they would not find anywhere else. It is also cheaper. It is worth the money). 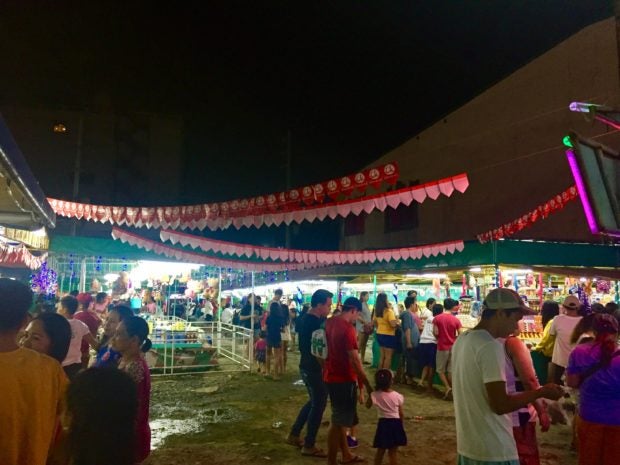 The perya is associated with revelry, of memorable moments with loved ones spent, and laughter. For Jayven, there is the joy in meeting people from all walks of life and in making new friends. At the same time, however, there are the long nights of perya work and even longer days of being away from his family — grindstones he takes for what they are, believing these would eventually be the springboard for his dreams. On certain nights, he would even have to work until midnight.

Jayven is not quite certain yet about what he really wants to do, but he carries within him the idea that working in a different country would bring the promise of something more stable than what could ever be offered here. 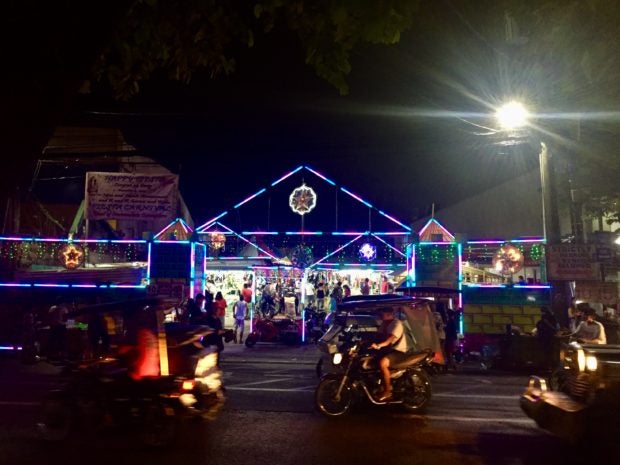 (It is fun, you get to meet a whole lot of people you can talk to everyday. You can gain many friends. But my dream is to go abroad, for any kind of work.)

Then his voice turned serious for a moment as he proceeded to define the dream: “Gusto kong bansa is Thailand (The country I want to go to is Thailand).“

“Para mura ang retoke (So cosmetic surgery would be cheap),“ Jayven joked, immediately dropping the gravity of his earlier declaration with a laugh, beaming, reflecting the energy of his beloved perya. JB

Aging out: The fate of abandoned Filipino children who don’t get adopted