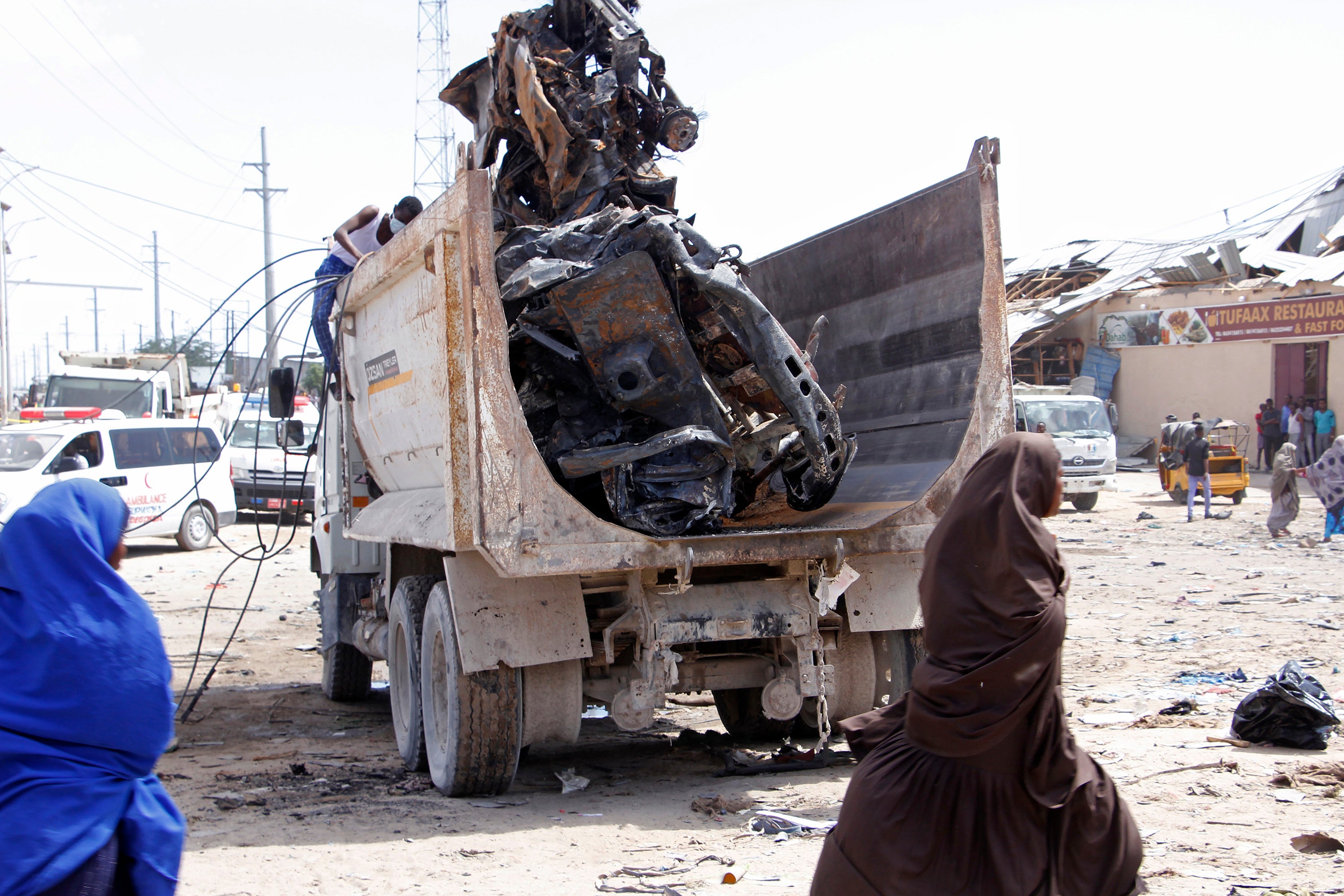 A truck carries wreckage of a car used in a car bomb in Mogadishu, Somalia, Saturday, Dec. 28, 2019. A truck bomb exploded at a busy security checkpoint in Somalia’s capital Saturday morning, authorities said. It was one of the deadliest attacks in Mogadishu in recent memory. (AP Photo/Farah Abdi Warsame)

The attack hit a busy checkpoint in the southwest of the city, leaving vehicles charred and twisted at a crossroads in the deadliest assault in two years in the Horn of Africa country.

Scores more were wounded in an area clogged with traffic because of the security checkpoint and a tax office collecting fees from trucks and buses.

“…the mujahideen carried (out) an attack… targeting a convoy of Turkish mercenaries and apostate militia who were escorting them,” Al-Shabaab spokesman Sheik Ali Mohamud Rage said in an audio message.

Among the dead were 16 students from the private Banadir University whose bus was passing through the crossroads as the bomb detonated.

Mogadishu is regularly hit by attacks by Al-Shabaab, which has fought for more than a decade to topple the Somali government.

For the first time, Al-Shabaab apologized to the civilian victims of the attack, which it justified as necessary in the fight against the Somali State and its foreign backers.

“We are very sorry about the casualty that was inflicted on our Somali Muslim society, and we are extending our condolences to the Muslims who have lost their lives and or (were) wounded and or had their property destroyed.”

Al-Shabaab do not usually claim attacks that cause such high casualty rates among the civilian population, for fear of losing the support they still enjoy with some Somalis.

The message also accused Turkey of trying to control Somalia’s resources. Turkey is a major donor and investor in Somalia, especially in humanitarian aid and reconstruction. Turkish companies manage Mogadishu’s port and airport.

“The Turks are our enemies and as we have said before, we will not stop fighting until they withdraw from our lands,” the spokesman said.

The death toll increased to 81 on Monday after two victims died from their wounds, the Somali information ministry said.

One of the new fatalities was among the injured who had been evacuated to Turkey via a Turkish military plane on Sunday.

Saturday’s attack was the biggest to hit Somalia since a truck exploded in 2017 near a fuel tanker in Mogadishu, creating a fireball that killed over 500 people.

In 2010, Al-Shabaab declared its allegiance to Al-Qaeda. But its fighters fled positions they once held in the capital Mogadishu, and have since lost many strongholds.

They retain control of large rural swathes of the country and continue to wage a guerrilla war against the authorities, managing to inflict bloody attacks at home and abroad.

The US regularly carries out airstrikes in Somalia, though the frequency of such operations has risen sharply this year.

In an April statement, AFRICOM said it had killed more than 800 people in 110 strikes in Somalia since April 2017.