MONSEY, N.Y. — Handwritten journals containing anti-Semitic references were found in the home of the man charged with federal hate crimes Monday in the stabbing and slashing of five people celebrating Hanukkah at a rabbi’s house north of New York City, authorities said.

Grafton E. Thomas, 37, was held without bail after appearing in federal court in White Plains on five counts of obstructing the free exercise of religious beliefs by attempting to kill with a dangerous weapon and causing injuries in the Saturday attack. Authorities said a blood-stained 18-inch (45-centimeter) machete was recovered from his car. 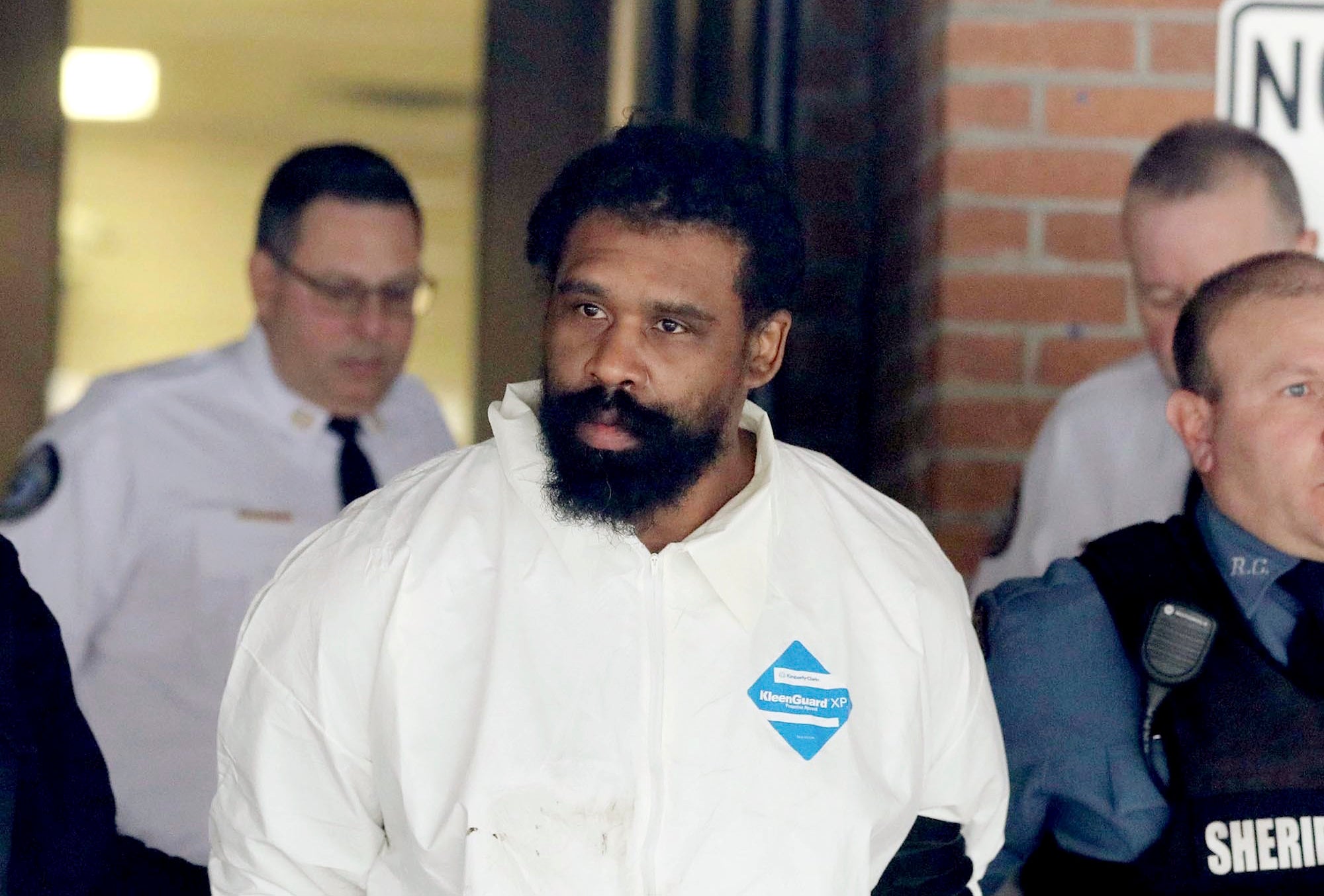 Grafton Thomas is led from Ramapo Town Hall in Ramapo, N.Y. following his arraignment Sunday, Dec. 29, 2019. Thomas was charged in the stabbings of multiple people as they gathered to celebrate Hanukkah at a rabbi’s home in Monsey, an Orthodox Jewish community north of New York City. (Seth Harrison/The Journal News via AP)

The bearded Thomas, his ankles shackled, shuffled into the courtroom in a prison jumpsuit, telling a judge who asked him if his head was clear that he was “not clear at all” and needed sleep. But he added: “I am coherent.”

The stabbings on the seventh night of Hanukkah come amid a series of violent attacks targeting Jews in the region that have led to increased security, particularly around religious gatherings.

A criminal complaint said journals recovered from Thomas’ home in Greenwood Lake included comments questioning “why ppl mourned for anti-Semitism when there is Semitic genocide” and a page with drawings of a Star of David and a swastika.

A phone recovered from his car included repeated internet searches for “Why did Hitler hate the Jews” as well as “German Jewish Temples near me” and “Prominent companies founded by Jews in America,” the complaint said.

On the day of the stabbings, the phone’s browser was used to access an article titled: “New York City Increases Police Presence in Jewish Neighborhoods After Possible Anti-Semitic Attacks. Here’s What To Know,” the complaint said.

Defense attorney Michael Sussman told reporters he visited Thomas’ home and found stacks of notes he described as “the ramblings of a disturbed individual” but nothing to point to an “anti-Semitic motive” or suggest Thomas “intentionally targeted” the rabbi’s home.

“My impression from speaking with him is that he needs serious psychiatric evaluation,” Sussman said. “His explanations were not terribly coherent.”

Thomas’ family said he was raised to embrace tolerance but has a long history of mental illness, including multiple hospitalizations.

“He has no history of like violent acts and no convictions for any crime,” his family said in a statement. “He has no known history of anti-Semitism and was raised in a home that embraced and respected all religions and races. He is not a member of any hate groups.”

In a release, U.S. Attorney Geoffrey S. Berman said Thomas “targeted his victims in the midst of a religious ceremony, transforming a joyous Hanukkah celebration into a scene of carnage and pain.”

William F. Sweeney Jr., head of New York’s FBI office, said the possible life prison sentence that the federal charges carry “for this type of attack are severe and justified.”

Thomas served in the Marines and was president of his class at a high school in Queens, Sussman said. He attended William Paterson University between 2005 and 2007, the university confirmed, where he played football as a walk-on running back.

Thomas’ family said his mental health deteriorated over the years. He would hear voices and have trouble completing sentences at times, Paige and Sussman said.

In court papers filed in a 2013 eviction case in Utah, Thomas said he suffered from schizophrenia, depression, and anxiety and his “conditions are spontaneous and untamed.”

Thomas was arrested within two hours of the Saturday night attack in Monsey. When police pulled his car over in Manhattan, he had blood all over his clothing and smelled of bleach but said “almost nothing” to the arresting officers, officials said.

Thomas’ aunt told The Associated Press that he had a “germ phobia” and would obsessively wash his hands and feet with bleach.

She said Thomas grew up in the Crown Heights neighborhood of Brooklyn and “lived peacefully” among Jewish neighbors. She said Thomas had not been taking his medication and recently went missing for a week.

The woman spoke on the condition of anonymity out of fear she would lose her government job for speaking publicly.

“They’re making him look like this monster,” she said in a telephone interview. “My nephew is not a monster. He’s just sick. He just needs help.”

According to the complaint, Thomas, a scarf covering his face, entered the rabbi’s home next door to a synagogue and said: “no one is leaving.” He then took out a machete and started stabbing and slashing people in the home packed with dozens of congregants, the complaint said.

The five victims suffered serious injuries — including a severed finger, slash wounds and deep lacerations — and at least one was in critical condition with a skull fracture, the complaint said. The rabbi’s son was also injured.

On Sunday, Thomas pleaded not guilty to five counts of attempted murder and one count of burglary. He was detained on $5 million bail and refused to answer questions as he was escorted to a vehicle.

Thomas’ criminal history includes an arrest for assaulting a police horse, according to an official briefed on the investigation who was not authorized to discuss the matter publicly and spoke to the AP on condition of anonymity. A lawyer representing Thomas at the arraignment said he had no convictions.

The attack was the latest in a string of violence targeting Jews in the region, including a Dec. 10 massacre at a kosher grocery store in New Jersey. Last month in Monsey, a man was stabbed while walking to a synagogue.

Gov. Andrew Cuomo, a Democrat, said Saturday’s savagery was the 13th anti-Semitic attack in New York since Dec. 8. According to the official briefed on the investigation, authorities do not believe Thomas is connected to recent anti-Semitic incidents in New York City.

Monsey, near the New Jersey state line about 35 miles (56 kilometers) north of New York City, is one of several Hudson Valley communities that has seen a rising population of Hasidic Jews in recent years. At a Sunday celebration that was planned before the attack, several members of the community stood guard armed with assault-style rifles.

“The Jewish community is utterly terrified,” Evan Bernstein, the regional director of the Anti-Defamation League of New York and New Jersey, said in a statement. “No one should have to live like this.”

President Donald Trump condemned the “horrific” attack, saying in a tweet Sunday that “We must all come together to fight, confront, and eradicate the evil scourge of anti-Semitism.”

In New York City, the Rev. Al Sharpton appeared with Jewish and other faith leaders at his Harlem headquarters and said he was disturbed and upset that several of the suspects in recent attacks on Jews have been black.