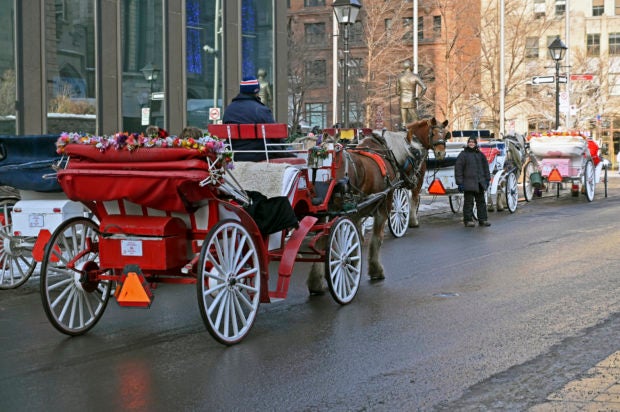 Horse-drawn carriages line up in front of the Notre-Dame basilica in Old-Montreal, waiting for tourists, in Quebec, Canada on Dec. 22, 2019. Image: AFP/Eric Thomas

To tourists, they are a time-honored, charming way of seeing the sights but animal rights activists say Montreal’s horse-drawn carriages are a cruel and unnecessary relic of yesteryear.

A longstanding feud between the coachmen and their critics looks set to end however with the unique mode of transport about to disappear from the streets of Canada’s second city by year-end.

“You can pet him if you want,” Nathalie Matte tells onlookers attracted to her hoofed beast with its flowing mane and tail.

In the heart of Montreal’s Old Port neighborhood, a half dozen horses and carriages are lined up outside the Notre Dame basilica, waiting for riders.

A group of tourists, tempted by offers of a languid and comfortable ride along cobblestone streets, and a complimentary blanket across their lap on a cold winter’s day, snap pictures.

The carriages this time of year are decorated with red ribbons and fir branches to mark the Christmas holidays.

“It’s a unique way to see the city rather than just taking the bus or the subway,” says Mujtaba Ali, 29, who is visiting with family from neighboring Ontario, as he steps off a carriage.

Horses and landaus — four-wheel, convertible carriages named after the German city of their origin — are a part of Montreal’s cultural heritage, says owner Luc Desparois.

“They’ve been around as long as Montreal has existed,” he told Agence France-Presse.

The Quebec city was founded by European settlers in the 1600s at the site of an indigenous village inhabited as far back as 4,000 years ago — although the landau itself was invented in the 18th century

City Hall has ordered an end to the tourist rides out of concern for the horses. In 2018, the council passed a by-law banishing horse-drawn carriages, starting in 2020.

The death of a horse in 2018 while pulling a carriage was the last straw for animal rights groups and prompted mayor Valerie Plante to speak out against the carriage industry, saying it was no longer welcome in Montreal.

The decision will put some 50 coachmen and their horses out of work.

“It is a tradition that has long been appreciated but today I think it is time to move on,” said Jean-François Parenteau, the city’s pointman in the case. The city, he said, must “show concern for the animals.”

His comments drew praise from Galahad, a Quebec association for the protection of horses, which lobbied for the ban. Its founder Chamie Angie Cadorette said the horses faced tough working conditions.

“It is not just an hour a day. It is eight hours a day, going up and down roads in traffic,” she said, accusing horse owners of neglect.

“They say they are mistreated. Prove it,” retorts Desparois, who recently lost a legal challenge to the ban.

City Hall, under pressure from activists, had long sought to ban the carriages, but until now had managed only incremental steps, such as requiring horses to be taken off the road when summer temperatures soared. That did not satisfy animal rights groups.

In April, to prevent out-of-work horses from ending up at slaughterhouses, the city said it would pay the Society for the Prevention of Cruelty to Animals 1,000 Canadian dollars (over P38,800) for each horse offered a refuge or adoptive family.

As of Dec. 16, only one application to join the program had been made.

The offer is a “total insult” for Desparois, owner of the Lucky Luc stable, which has a total of 15 horses and employs 15 coachmen.

“You could offer me $10,000 tomorrow morning and I would not sell them to you,” he said, adding that after 34 years in the business his animals mean more to him than money could.

After the ban comes into effect, the “king of horse-drawn carriages” — as local media has dubbed him — plans to take his horses to other nearby communities or maybe even to Ottawa.

Older coachmen will simply take early retirement. Others will likely leave the profession.

“I won’t have a choice but to quit. I won’t have the means to move to Ottawa,” said Nathalie Matte, 52, a coach woman who plans to return to a previous job as a groom.

City Hall, meanwhile, is working on a retraining program to help coachmen transition to other tourist jobs. CL/JB

WATCH: 190-pound dog rescued on a mountain after getting tired during hike