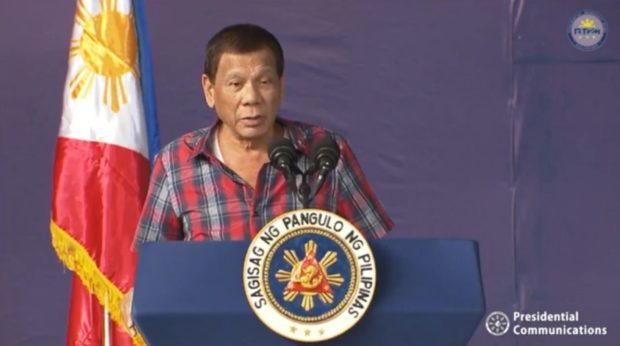 Instead, Duterte ordered Interior Secretary Eduardo Año to “fix” and “lead” the police force for now.

The DILG has supervision over the PNP, which is currently being led by officer-in-charge Lt. Gen. Archie Gamboa.

(I told General Año to lead it.  You fix the police so that by the time we make the exit two years from now, at least the problems of the Filipinos are no longer heavy.)

The President earlier admitted that he was having a “hard time” looking for the next PNP chief, citing the drug scandal where former PNP chief Oscar Albayalde was embroiled.

He said recommendations given to him, which included Gamboa, were “all good” but said that he wanted more.

“I mean, they’re all good, but I want a better deal. It’s not enough that you recommend it to me. If you tell me, ‘Sir, if you choose me, all the drug lords are dead,’ then it’s you. If you cannot give me that guarantee, never mind,” he then said.

Aside from Gamboa, Año recommended to the President deputy chief for operations Lt. Gen. Camilo Cascolan and the chief of directorial staff Lt. Gen. Guillermo Eleazar.

In his speech in North Cotabato, he again warned policemen and politicians not to get into illegal drugs.

“You’re dealing with government officials or officers who are into corruption, especially drugs. That I am warning you again, be it the police, the mayors o ‘yang mga barangay captains: You will die. When you enter into illegal drugs, there is no other way to deal with you, except to kill you,” he said.