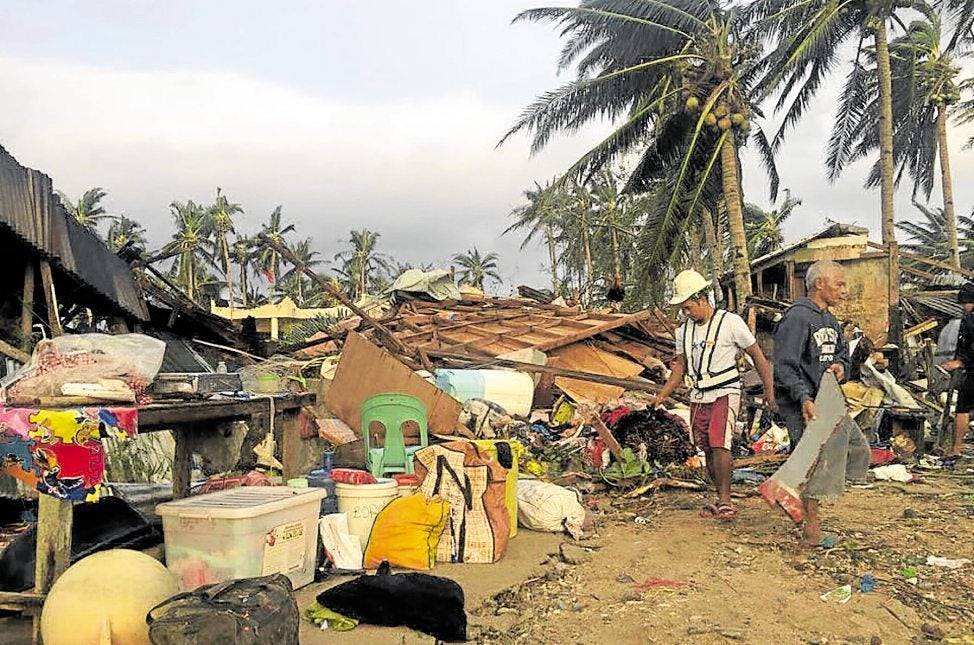 SALVAGE MISSION Residents of Hernani, Eastern Samar, recover whatever materials are left from their houses for rebuilding, days after Typhoon “Ursula” hit their town.—LOURIEN MADARA

The number of deaths from a powerful storm that hit the country on Christmas Day has climbed to 41, authorities said Sunday, with tens of thousands still in evacuation centres.

Typhoon Ursula (International name: Phanfone) left the Philippines on Saturday after devastating several islands in the Visayas, including popular tourist destinations, but the extent of the damage continued to grow as assessments came in.

The death toll of 41—up from 28 on Friday—included three boat crew who died after their vessel capsized due to strong winds, a policeman electrocuted by a toppled post, and a man struck by a felled tree.

The latest agency report showed over 1.6 million people were affected by the typhoon, which damaged over 260,000 houses and forced almost a hundred thousand people to flee to emergency shelters.

Many of the affected residents in the predominantly Catholic nation celebrated Christmas in evacuation centers, where they may have to stay until the New Year given the scale of destruction.

The government estimated that the storm has caused damage to agriculture and infrastructure worth $21 million.

Power lines and internet connections remain down in some areas after Ursula’s powerful wind gusts of up to 200 kilometers per hour toppled electric posts and trees.

In the island-resort of Boracay, residents have been lining up in gasoline stations amid a shortage of diesel fuel for generators and transportation.

As the power outage entered the fourth day, business operations have been disrupted. Electric tricycles could not run due to lack of electricity.

Boracay has been without electricity since Christmas Day after strong winds toppled electric lines of the Aklan Electric Cooperative and transmission facilities of the National Grid Corporation of the Philippines.

“We cannot operate normally because we cannot buy enough fuel,” a resident and business operator told the Inquirer.

Some establishments can only operate their generator sets from 4 p.m. to 2 a.m. due to limited diesel fuel.

Around 200 electric tricycles have also stopped operating due to lack of charging stations.

The typhoon left 20 dead and eight missing on Panay Island, according to a report of the Regional Disaster Risk Reduction Management Council.

At least 122,369 persons are still in evacuation centers, according to the report.

Typhoon Ursula is the 21st cyclone to hit the storm-prone Philippines, which is the first major landmass facing the Pacific typhoon belt.

Many of the storms are deadly, and they typically wipe out harvests, homes and infrastructure, keeping millions of people perennially poor. —With a report from Nestor P. Burgos Jr. and AFP