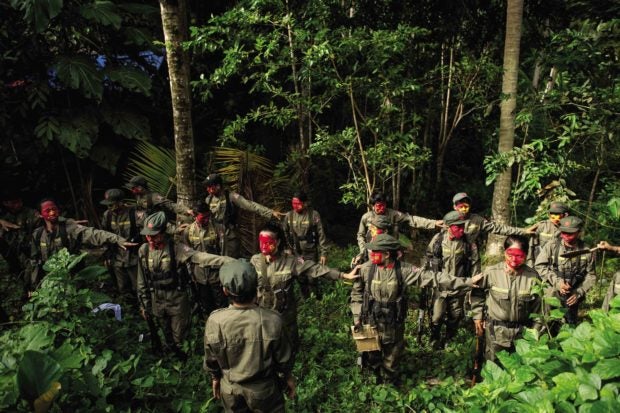 New People’s Army guerrillas stand in formation at their camp in the Sierra Madre mountain range in this photo taken on July 30, 2017. —AFP FILE PHOTO

LUCENA CITY – The Communist Party of the Philippines (CPP) has ordered its armed wing, the New People’s Army (NPA), to help the victims of Typhoon Ursula (international name: Phanfone) during the ceasefire period.

The CPP urges the rebel forces to conduct emergency relief operations and assist the masses most especially in badly-hit areas.

“Red commanders and fighters may devote ample time within the duration of the unilateral ceasefire to work with revolutionary mass organizations in rehabilitating farms and rebuilding homes,” the CPP said in a statement issued by its Information Bureau on Saturday.

However, the CPP warned the Maoist-inspired guerillas in the conduct of typhoon relief operation “to remain vigilant against any hostile actions” of the government forces in accordance with the truce guidelines.

The CPP and the Duterte administration are observing a fragile holiday ceasefire agreement that began at 12:01 a.m. Dec. 23 and would end at 11:59 p.m. on Jan. 7 for the planned resumption of the peace talks.

“Well-meaning individuals and organizations who are in respite for the traditional holidays may be encouraged to join in relief operations,” the Party said.

The CPP said the continuous commemorations of the Party’s 51st founding anniversary on Dec. 26 may also take up relief and rehabilitation efforts to help the typhoon victims.

Tisoy hit Luzon at the beginning of December and was followed by Ursula which devastated Visayas and parts of Southern Luzon on Christmas.