MANILA, Philippines – The city government of Marikina has urged residents to attend the free year-end concert and the fireworks display on December 30 instead of personally using banned firecrackers on New Year’s Eve.

Marikina Mayor Marcelino Teodoro said in a statement on Saturday that it is better to welcome the new year through a safer and peaceful celebration. 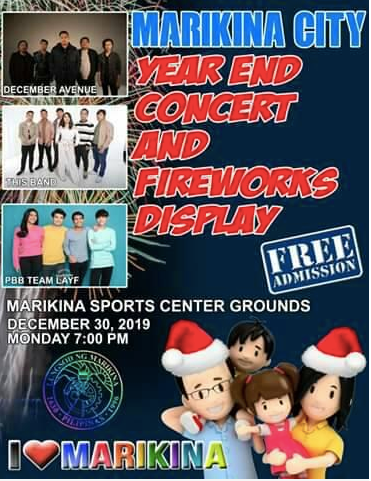 “We, here in Marikina, want everyone to be safe and to have a fun-filled celebration of New Year that’s why we hold fireworks display and year-end concert. We celebrate this annually as a community and as a big happy family,” Teodoro said.

According to the local executive, this project is still in line with programs to minimize, if not eradicate, firecracker-related injuries and damages to property.

He also urged people who would intend to use firecrackers to take part in community-based displays, especially since selling firecrackers is banned in the city.

Marikina’s LGU said the concert would be held at the Marikina Sports Center from 7 p.m. to 11 p.m., featuring some of the country’s top talents like bands December Avenue, IV of Spades, This Band, and other local artists from the city.

A 15-minute pyro-musical display would also take place during the event.

Local officials said that they are expecting crowds to flock the year-end concert, which has been a tradition for people in Marikina with the first shows starting in the late 1990s.  Event organizers said that around 70,000 people attended last year’s program.

“The year-end concert and fireworks display serve as a venue for all residents of Marikina to have a good time and enjoy together with their families, friends and their community. That is what the goal really is,” Teodoro explained.