Duterte to decline Trump’s invitation to visit US — Palace 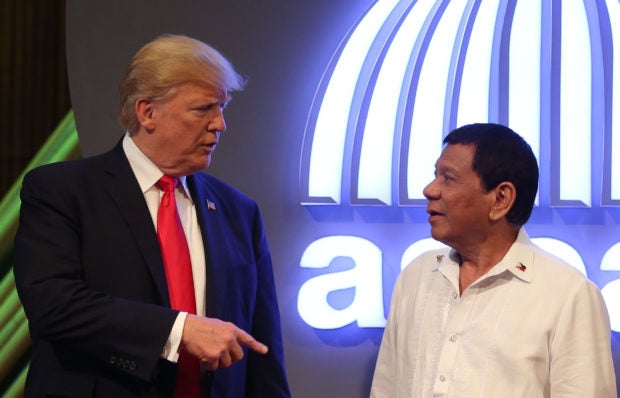 “He [Duterte] said he would respond to the letter-invitation and would decline it,” presidential spokesperson Salvador Panelo told reporters in Malacañang.

Duterte has repeatedly said in his previous speeches that he would never go to the US during his term as President after Washington, under former president Barack Obama, became critical of his drug war and anti-criminality campaign.

“He [Duterte] said he never intended to visit the US ever since,” Panelo said.

But Duterte’s hardline stance agaisnt visiting the US softened after Trump, whom he considers his “friend,” assumed the presidency.

Trump first invited Duterte over a phone call in 2017. In 2018, Duterte revealed he received a letter from Trump’s Cabinet to visit America.

But Panelo said Duterte does not hold it against Trump.

Read Next
Duterte to skip Rizal Day rites for 2nd straight year
EDITORS' PICK
10 Filipinos positive for COVID-19 in UK, 7 in Ireland — envoy
Nograles: Cabinet members to donate 75% of monthly salary to aid COVID-19 fight
Quick chat with Nicole Andersson: ‘You really don’t need much to be happy’
IATF to LGUs: Issue ordinances vs attacks on frontliners, COVID-19 patients
Diokno to Duterte: OK to make fun of buck tooth, but focus on people’s needs first
Robredo spox thanks Duterte for defending VP’s efforts vs COVID-19
MOST READ
Coronavirus hotbed Rizal to shut borders on April 6
Gov’t mulling quarantine period extension of 15-20 more days
ADB warns PH against prolonged lockdown
Sotto on Isko Moreno’s call: We do our job without the media following our every move
Don't miss out on the latest news and information.