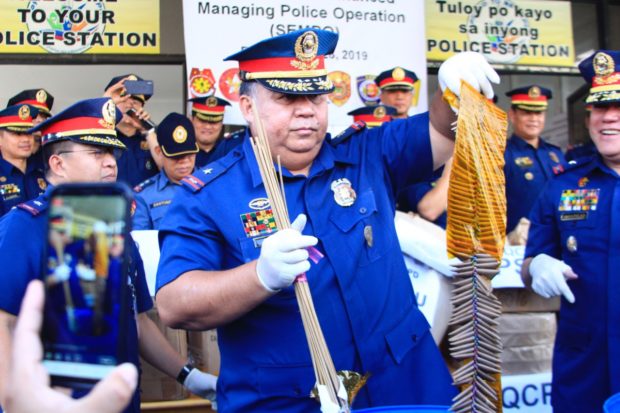 MANILA, Philippines – Police officers from the National Capital Region Police Office (NCRPO) are ordered to report to the nearest camps or stations on New Year’s Eve, in an effort to prevent indiscriminate firing among cops.

NCRPO Acting Diretor Brig. Gen. Debold Sinas on Friday said this is in line with the directive from Philippine National Police (PNP) officer-in-charge Lt. Gen. Archie Gamboa, as the service firearms of police officers would not be taped unlike in past yuletide celebrations.

(All of the PNP’s on-break and off-duty personnel will report at seven o’clock of December 31 to the nearest police station or camp, and should be in proper uniform and bring their firearms, to assure that the police would not be involved in indiscriminate firing.)

Sinas also reminded civilians that using their firearms to celebrate the new year, and using firecrackers on non-designated areas are illegal.  He said warned potential wrongdoers that the police would be on standby to secure the holidays — which means that violators will be caught more easily.

(“We are reminding everybody, the police will monitor the situation.  Most of our police officers who are not on duty will stay inside camps.)

(For civilians, we are warning you because we can trace that, as the ballistics system at the crime laboratory has been scientific and high-tech.  So we can locate indiscriminate firing through the system.)

This reminder from Sinas came after a Chinese national identified as a certain Kimy Chan, 30, was arrested after firing an unlicensed gun in Pasay City on early Christmas Day, December 25.

Reports from Pasay City’s Police Station said that Chan went to a karaoke bar along Roxas Boulevard, but fired his gun after being irritated.  He is facing charges for alarm and scandal and for illegal possession of firearms after his Raven Arms pistol was found defaced.

Sinas clarified, though, that no police personnel fired his or her firearm as of Friday.

(For our personnel, negative.  But for non-PNP personnel, there is one, a Chinese national who fired his gun after coming from a karaoke.  We recovered a .25 caliber pistol from him.  Cases have already been filed.)

Using items that emit loud noise has been a tradition for Filipinos in welcoming the new year, due to the belief that it drives away bad luck.  However, several stray bullet incidents have been recorded in the past as gun owners use their firearms to create noise.

That is aside from the list of injuries and casualties caused by firecracker-related injuries, where the items explode before they should.

In terms of firecrackers, Sinas noted that people who sell illegal firecrackers are also easier to pinpoint as there are designated areas for selling the items.  After the briefing, Sinas and other NCRPO officials disposed of the confiscated firecrackers by dipping them in water.

(So that we can assure that the police would not use this, they might say that this was the reason why the items were confiscated.  We will dip them in water so it is not usable anymore.)