Leyte, Eastern Samar under state of calamity due to ‘Ursula’ 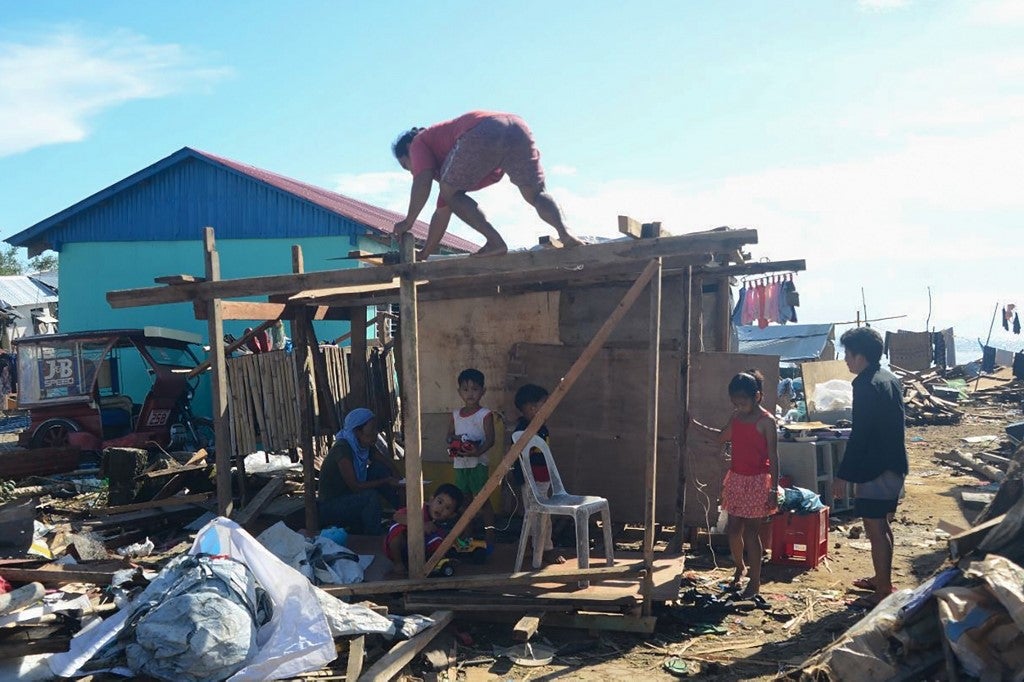 Residents construct a makeshift shelter after their house was destroyed at the height of Typhoon Phanfone in Guiuan town in Eastern Samar province on December 26, 2019. Photo by ALREN BERONIO / AFP

TACLOBAN CITY — The provinces of Leyte and Eastern Samar are now under a state of calamity in the wake of devastation following the onslaught of Typhoon “Ursula.”

The declaration would allow these provincial governments to tap their calamity funds and fast track the distribution of relief assistance to affected families.

Five persons were also reported dead in Leyte and Eastern Samar at the height of Ursula’s onslaught.

The Leyte Provincial Disaster Risk Reduction and Management Office (PDRRMO) reported that 1,941 families from 11 towns and Ormoc City were affected by the typhoon.

Damage to crops and fisheries caused by Ursula in Eastern Visayas reached about P24.84 million.

Two fatalities were also reported in Leyte – a 13-year-old boy from Baybay City, and a 37-year-old man from Kananga.

The PDRRMO in Eastern Samar also moved for the placing of the entire province under a state of calamity.

In Eastern Samar, provincial administrator Nelson Cortez said they were still consolidating reports from the 22 towns and the capital city of Borongan.

“Houses in these areas were destroyed due to the storm surges, which reached up to three to four meters,” Cortez said in a phone interview.

“The damage on our crops and infrastructure could easily run into millions of pesos,” he added.

Two of them were from Guiuan who died after they were hit by flying debris. Another person drowned in floodwaters in Balangkayan.

Cortes could not, however, provide details on the deaths of the three persons.