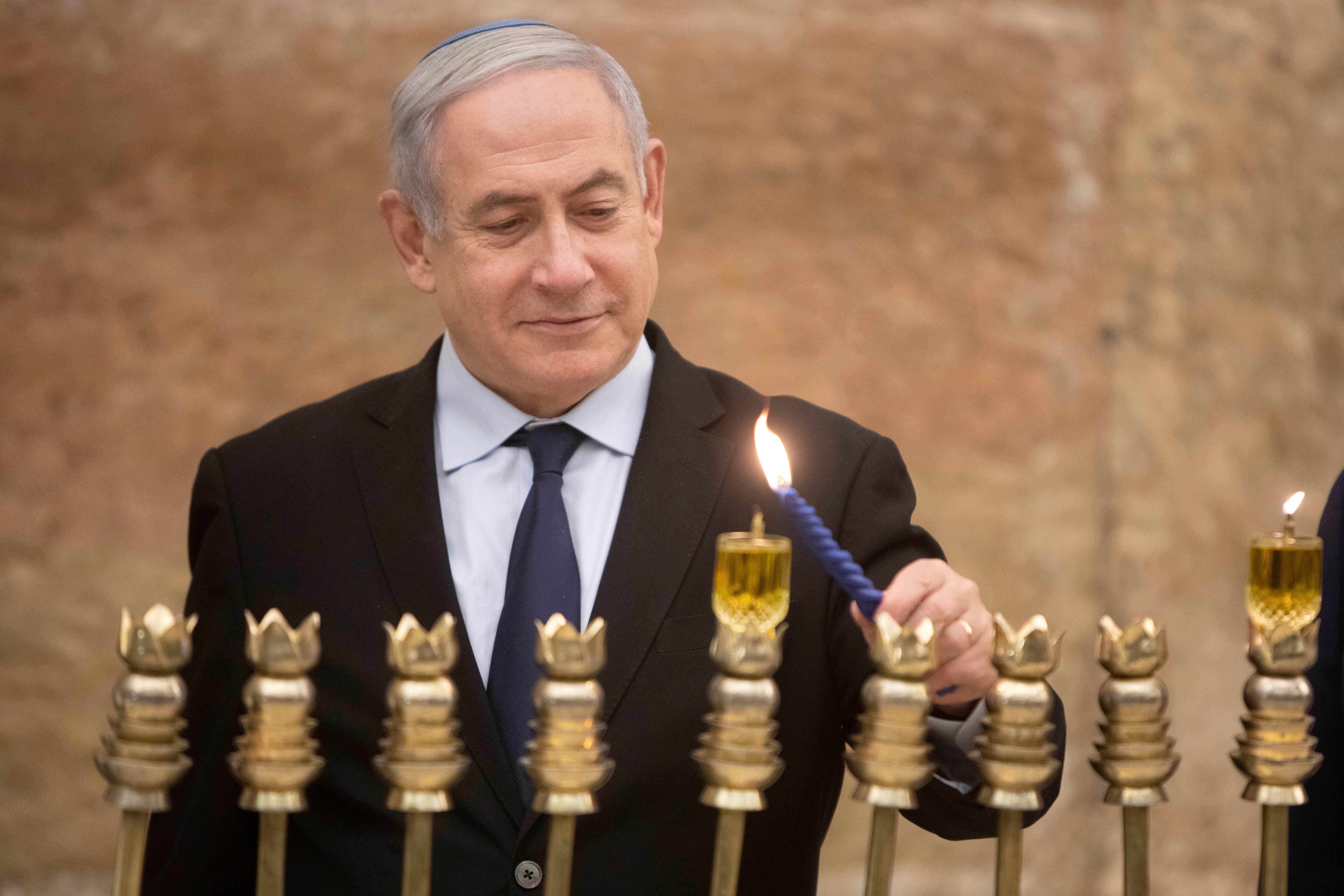 JERUSALEM — Israeli Prime Minister Benjamin Netanyahu has declared victory in his primary election battle for leadership of the Likud party.

“A giant victory,” Netanyahu tweeted, just over an hour after polls closed.

A victory would mean that Netanyahu will lead Likud during March elections, Israel’s unprecedented third election in under a year.

Israeli Prime Minister Benjamin Netanyahu on Thursday faced the first serious internal challenge to his decade-long rule as his party held a primary vote following his failure to form a government and his indictment on corruption charges.

Veteran Likud party member Gideon Saar hoped to unseat Netanyahu, telling voters he would be better placed to form a government after national elections in March.

Despite the indictment, Netanyahu remains popular among Likud members, and the fiercely loyal party — which has only had four leaders since its inception in the 1970s — stood firmly behind the long-serving leader. He was expected to defeat Saar, and a win could strengthen his hand going into the next national vote.

“For years, I have been working for you for the sake of our beloved country. Now I am asking for your support,” Netanyahu wrote on Facebook. “A big victory for me in the primaries will ensure a huge victory in the Knesset elections.”

Saar, who has garnered support from a handful of Likud backbenchers, had surged in the lead-up to the vote, and he could benefit from cold, rainy weather that appeared to hold down turnout. If he wins, he would become Likud’s candidate for prime minister in March.

Netanyahu has portrayed Saar as inexperienced while depicting himself as a master of international diplomacy and a scourge to Israel’s enemies.

In what was seen as an embarrassment at a critical moment, Netanyahu was rushed off stage Wednesday after a rocket fired from Gaza set off an air raid siren at a campaign rally in the southern city of Ashkelon. Israel responded with a wave of airstrikes early Thursday. There were no reports of casualties or major damage.

A similar incident happened in September when Netanyahu was in the nearby city of Ashdod campaigning for the second general Israeli election of the year.

Polls closed at 11 p.m. (9 p.m. GMT), and results were expected early Friday. Just under 50% of 116,000 eligible voters cast ballots, with many apparently deterred by the weather.

Netanyahu faces charges of bribery, fraud, and breach of trust in three corruption cases. He is accused of trading legislative or regulatory favors for lavish gifts or favorable media coverage.

He denies wrongdoing and has waged an angry campaign against the media and law enforcement officials he says are bent on ousting him. His supporters have tried to paint Saar as part of the same conspiracy.

The indictments came amid months of political deadlock in Israel after two inconclusive elections.

Netanyahu’s main rival, former military chief Benny Gantz, was also unable to form a government after the September vote. While the two professed eagerness to form a unity government, they differed on its composition and who would lead it, deepening the stalemate.

Recent polls showed that with Saar as leader, Likud would make a more powerful bloc with its natural ultra-Orthodox and nationalist allies. Saar would also be in an easier position to create a national unity government with Gantz’s centrist Blue and White party if, as expected, the March election produces a deadlock.

Speaking on television, Saar said he was best positioned to lead Likud to victory. He described Blue and White as a “balloon” comprised of various factions unified by the sole goal of toppling Netanyahu. If Netanyahu goes, he said, a good chunk of Blue and White’s supporters would return to Likud. “If I win today, we will also win on March 2,” he said.

Whatever the results are, said Avraham Diskin, a political scientist at Hebrew University of Jerusalem, the primary “definitely strengthens Saar unless he is humiliated in the elections today, and that’s not very likely to happen.”

Netanyahu hopes that the coming election will deliver him a majority of lawmakers in favor of granting him immunity from prosecution. But if Saar leads the party into the new election, Netanyahu would lose that option.

Even if Netanyahu wins the primary, his political future would remain in doubt. The Supreme Court is set next week to begin considering the question of whether an indicted member of parliament can be tasked with forming a new government. It’s not clear when a ruling would be handed down.

In recent days, Netanyahu has appeared rejuvenated, holding campaign events in which he has met with Likud members face to face, often in small gatherings.

Netanyahu has trumpeted his close ties to U.S. President Donald Trump, Russian President Vladimir Putin and other world leaders. He has also presented himself as the best candidate to protect Israel, pointing to a wave of recent military operations against Iran-linked targets across the region.

On Thursday, Netanyahu’s office said he spoke to Putin to again request the release of an Israeli woman who was arrested on drug charges while traveling through Moscow earlier this year.

They also discussed Iran and Syria.

The prolonged political uncertainty in Israel led the Trump administration to delay the release of its long-anticipated Mideast peace plan, which the Palestinians have already rejected over what they view as the administration’s unfair bias toward Israel.

Netanyahu has said Israel is on the cusp of gaining U.S. support for the annexation of large parts of the occupied West Bank. Such a move would likely extinguish any hope of creating a Palestinian state but would cement Netanyahu’s legacy as a transformative leader.