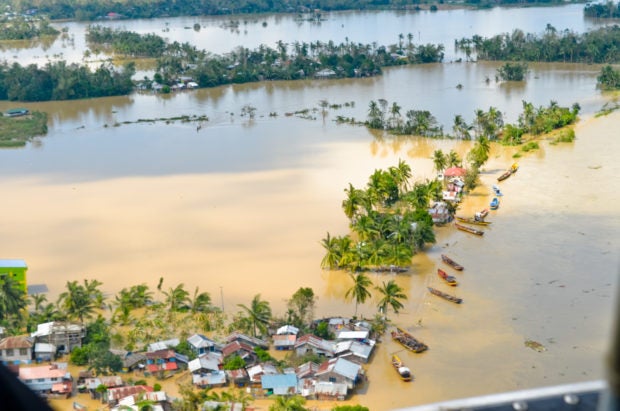 ROXAS CITY—A state of calamity had been declared in the province of Capiz following the onslaught of Typhoon Ursula.

The provincial board approved the recommendation by the Provincial Disaster Risk and Reduction Management Council (PDRRMC) for a state of calamity to be declared in the province, one of the worst hit by Ursula.

The storm left a trail of destruction in Capiz’s 16 towns and the capital city of Roxas.

Three fatalities have been reported in the province with at least 5,000 persons displaced.

Judy Grace Pelaez, Capiz PDRRMC executive officer, said farms had been washed out and their crops destroyed. Houses and other structures were destroyed, too, she said.

Between 70 to 80 percent of several towns are under water.

Flooding was expected to last for two weeks as floodwater in low-lying areas continued to rise, according to Pelaez.

She said officials were still consolidating reports on damage to infrastructure and agriculture.

In Roxas City, residents lined up for water. Streets were littered with debris and fallen trees and electric posts.

The devastation is worst along coastal villages where houses, mostly made of light materials, were destroyed or heavily damaged.

“The strong winds first hit us around 3 a.m. on Wednesday followed by a lull,” said Vincy Depol, a resident of Culasi, a coastal village. “Then it struck again around 5 a.m. while we were starting to clean up,” Depol said.