P4.5 B worth of smuggled goods found in Divisoria – PACC 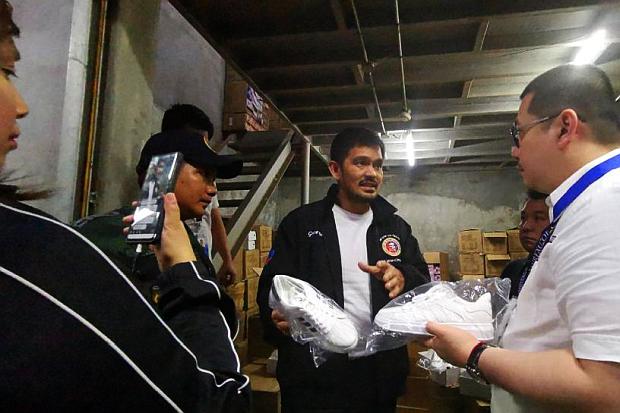 MANILA, Philippines — Fake smuggled goods worth about P4.5 billion are being sold in malls in Divisoria in Manila and the stores selling them are not complying with the requirements of the Bureau of Internal Revenue (BIR) nor are they registered with the Department of Trade and Industry (DTI).

This was the finding of the Presidential Anti-Corruption Commission (PACC), which conducted last Monday, Dec. 23, an inter-agency operation in the area with members of the BIR, DTI, the Bureau of Customs (BOC), the Bureau of Immigration (BI), the Intellectual Property Office (IPO), and the Philippine National Police (PNP).

The operation was aimed at, among others, validating reports of rampant smuggling and foreigner allegedly working without valid working permits.

“We promote and encourage business and trade,” PACC Commissioner Greco Belgica said in a statement issued on Thursday. “However, we cannot feign ignorance on the illegal activities being perpetrated by smugglers. We will make sure that importers and brokers who blatantly violated Customs rules and regulations and facilitated the release of these smuggled goods will face legal action. We will also make sure that after our thorough investigation, those BOC personnel who are proven to be connected to this incident will be charged accordingly.”

Belgica also revealed that foreigners selling the smuggled goods were not authorized to do business in the Philippines.

“The Philippine Immigration Act prohibits foreign nationals from working in the Philippines without a valid working visa or permit,” he said. “Foreigners are also banned from engaging in the retail business, competing with small Filipino businessmen as it will deprive the latter of livelihood opportunities. They could be charged with violating the conditions of their stay, as temporary visitors are not supposed to engage in gainful activity during their stay in the country.”

Belgica also emphasized the need to implement systemic changes to make it easier for businessmen to register and follow the law.

“We need to seal the loopholes in the system that allow smuggling and illegal aliens to work,” he said. “We are doing this to protect the consumers from hazardous products being sold in the market. Some toys, bags and shirts were found out to contain poisonous led materials that were reported to have killed innocent children.”

According to Belgica, the perpetration of smuggling also affects the country’s world trade investment rating. Investors lose trust and confidence in the country’s ability to protect legitimate businesses.

“We are losing more in this process. Legitimate businessmen who follow rules and pay the right taxes will be disheartened to invest in the Philippines. This illegal practice, if not stopped, will promote lawlessness and may cost the government to lose billions of pesos in revenue,” Belgica said.

According to the BOC, this has been their biggest raid this year.