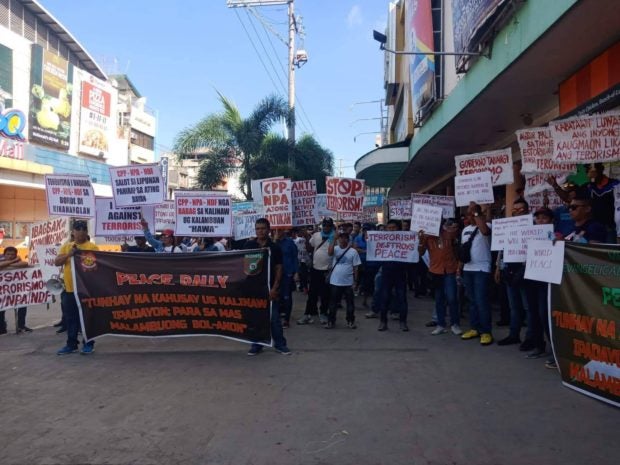 A peace rally was held on Thursday, December 26 in Tagbilaran City, Bohol as the CPP-NPA celebrates its 51st founding anniversary today.

The peace rally was held at the capital city of Tagbilaran to condemn the “anti-people activities” of the CPP-NPA, as it celebrates its 51st founding anniversary today, Dec. 26.

“It has been 51 years of senseless killings. The Philippine National Police wants peace and development for Bohol. We don’t want the gains of progress and development of Bohol be wasted,” said Police Colonel Jonathan Cabal, director of the Bohol Provincial Police Office (BPPO).

BPPO said the number of participants in the event was around 600.

A peace walk was held with participants from the Muslim communities, BPPO personnel, Philippine Army, and members of force multipliers composed of Bantay Bayan, barangay tanod and barangay officials walked at least 2.5 km from the New Provincial Capitol to Tagbilaran City Square bringing placards and streamers condemning the CPP-NPA.

During the program, three former rebels shared their “bitter” experiences with the CPP-NPA. They said the “cause is fake” and “palpak” (failure).