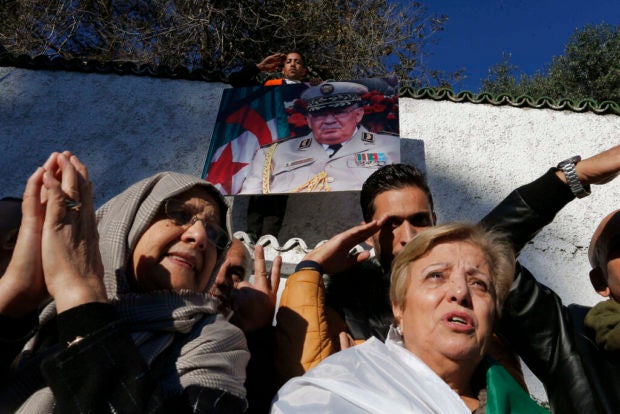 ALGIERS, Algeria — Algeria held an elaborate military funeral Wednesday for the general who was the gas-rich country’s de facto ruler amid political turmoil throughout this year.

Big crowds packed the route of the funeral cortege Wednesday to pay homage to Gen. Ahmed Gaid Salah, chief of the armed forces. Some people ran alongside flower-draped military vehicles, shouting in grief. Others saluted his coffin, draped in the Algerian flag, or kissed his portrait.

After a ceremony at the Palace of the People, he was buried at the El Alia cemetery alongside others who fought in Algeria’s war for independence from France. Algeria’s military plays a central role in decision-making in this country, a key ally to Western powers in fighting Islamic extremism.

Some mourned him as a symbol of the fading independence generation and a guarantor of stability amid this year’s protests. Others saw him as epitomizing an opaque leadership out of touch with worries of Algeria’s large youth population.

The military chief then pushed for elections earlier this month, won by a former prime minister considered close to Gaid Salah, Abdelmadjid Tebboune.

Protesters later turned against Gaid Salah, demanding his departure and a wholesale makeover of Algeria’s political structure. Students held their regular weekly protests Tuesday after his death, despite the three days of official mourning declared by Algeria’s leadership.