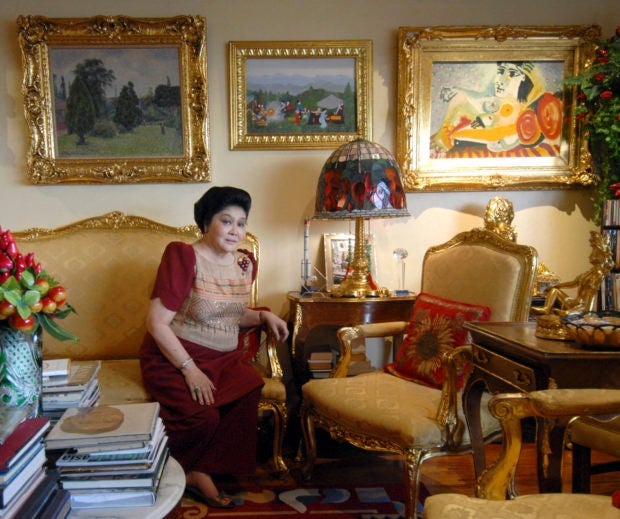 COLLECTION Screengrab of US documentary “The Kingmaker,” showing Imelda Marcos with her paintings. —INQUIRER FILE PHOTO

MANILA, Philippines — Sandiganbayan Associate Justice Maryann Corpus Mañalac said that while the Marcos family appeared to have won, after the antigraft court dismissed a P200 billion forfeiture case against them earlier this month, the government has already collected majority of the assets involved in that case.

“A quandary exists as to what actually the remaining assets and properties are, if any at all, which can continue to be the subject of the present action,” said Mañalac, in a 38 page separate concurring opinion attached to the decision penned by Associate Justice Alex Quiroz.

Mañalac chided the Presidential Commission on Good Government (PCGG) for its lackluster record keeping when it comes to recovered assets from the Marcos family.

“A clear and unambiguous listing of the remaining assets and properties in this case, especially the status of each and every one of them, given that significant supervening events had happened during the pendency of this case for more than 32 years, is necessary not only in order to avoid conflicting rulings but also for purposes of clarity, practicality and expediency,” Mañalac said.

Mañalac said that while she agreed with the decision which dismissed the case, she concurred simply because the case is moot. She said that it was clear that the amount involved is clearly ill gotten.

“The fact that the Marcoses have ill-gotten wealth or illegally acquired properties has already been judicially established and settled in this jurisdiction,” said Mañalac, contrary to Quiroz’ opinion that a lack of original documents casts doubt on whether the P200 billion is in fact ill gotten.

Mañalac added that if the properties were not ill gotten, the dictator would not have resorted to using dummies.

“If all these financial transactions were lawful and legitimate, one wonders why the former President had to use dummies and trustees in the acquisition of assets and properties here and overseas,” Mañalac said.

While most of the assets have been awarded to victims of human rights violations during the martial law era, the Arelma money, from Arelma Inc., one of the Marcoses’ dummy companies, is still subject to litigation in New York.

In an exhaustive discussion of past Supreme Court decisions against the Marcoses, Mañalac said it is clear that the former dictator and his family have failed to overcome the presumption that their wealth is ill gotten.

Meanwhile, in the main decision penned by Quiroz, the antigraft court cited the Best Evidence Rule, and explained that the case was dismissed since “the bulk” of documentary evidence submitted by government prosecutors were “mere photocopies, most of which are barely readable.”

“The Court cannot simply assume that the properties subject of this case were ill-gotten,” the Quiroz decision added.