PERTH, Australia – Areas of Australia that have been ravaged by deadly wildfires experienced temporary relief on Wednesday, but oppressive conditions are expected to return this weekend. 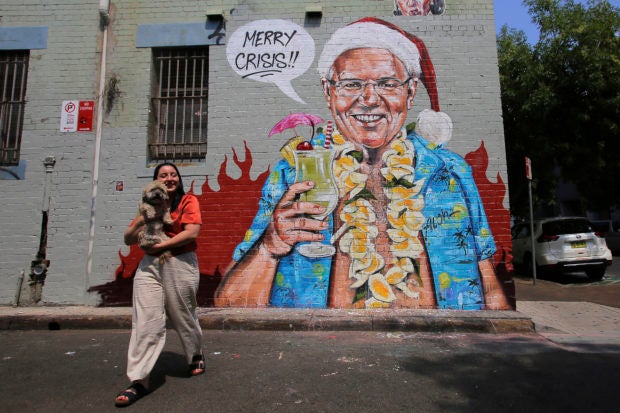 A mural depicting Prime Minister Scott Morrison wearing an unbuttoned Hawaiian shirt, orange lei and Santa Claus hat while holding a cocktail by artist Scott Marsh is seen on a wall in Sydney, Wednesday, Dec. 25, 2019. Morrison was under pressure since taking a much criticized family vacation to Hawaii during the wildfire crisis.(Steven Saphore/AAP Images via AP)

About 5 million hectares (12.35 million acres) of land have burned nationwide over the past few months, with nine people killed and more than 950 homes destroyed. New South Wales, the country’s most populous state, has received the brunt of the damage, with around 850 homes razed in the state.

Parts of New South Wales, including Sydney, experienced cool and damp conditions on Christmas Day, but more than 70 fires continued to burn across the state. New South Wales has been in a seven-day state of emergency, which was to expire on Wednesday night.

About 2,000 firefighters and 400 firetrucks battled the blazes in more favorable conditions, but high temperatures are set to return. Sydney is forecast to hit 31 degrees Celsius (88 Fahrenheit) on Sunday, while the city’s western suburbs could reach 41 C (106 F).

Fire danger ratings remained very high in northwestern New South Wales, and were between high and moderate for the rest of the state.
In his annual Christmas message, Prime Minister Scott Morrison paid tribute to the families of the two firefighters — Geoffrey Keaton, 32, and Andrew O’Dwyer, 36 — who died last week battling blazes southwest of Sydney.

The wildfire crisis forced Morrison to cut short his much-criticized family vacation in Hawaii. He returned to Australia on Saturday night.
“To Andrew and Geoffrey’s parents, we know this is going to be a tough Christmas for you, first one without both those two amazing men,” he said.
“I want to thank all those who serve our nation, serving as volunteers fighting those fires as we speak,” Morrison added.

Meanwhile, about 200 firefighters continued to battle a wildfire Wednesday in the Adelaide Hills, which is currently at the “watch and act” level issued by the South Australian Country Fire Service.

South Australia state, which last week had 86 homes destroyed after wildfires flared in catastrophic conditions, is bracing for a return of extreme temperatures, with Adelaide, the state capital, expected to reach 41 C (106 F) on Saturday.

Read Next
900 families decamped in Albay, Sorsogon
EDITORS' PICK
Cherry Mobile teams up with Cloud Panda PH, launches online store
WHO resumes hydroxychloroquine coronavirus trials
COOCAA TV Bounce Back Sale offers up to 50% off
DOLE eyeing P20-B subsidy for MSMEs
Over P785M distributed to 98K PUV drivers in Metro Manila — DSWD
SMDC The Good Guys on the Go
MOST READ
It’s final: Anti-Terror Bill now only needs Duterte’s signature
Kris Aquino goes home after quarantining for nearly 3 months in Puerto Galera
‘She had no right to be in Singapore’: Youth pleads guilty to abusing Filipino maid
Piolo gets first call slip from ABS-CBN to resume ‘ASAP’ taping
Don't miss out on the latest news and information.