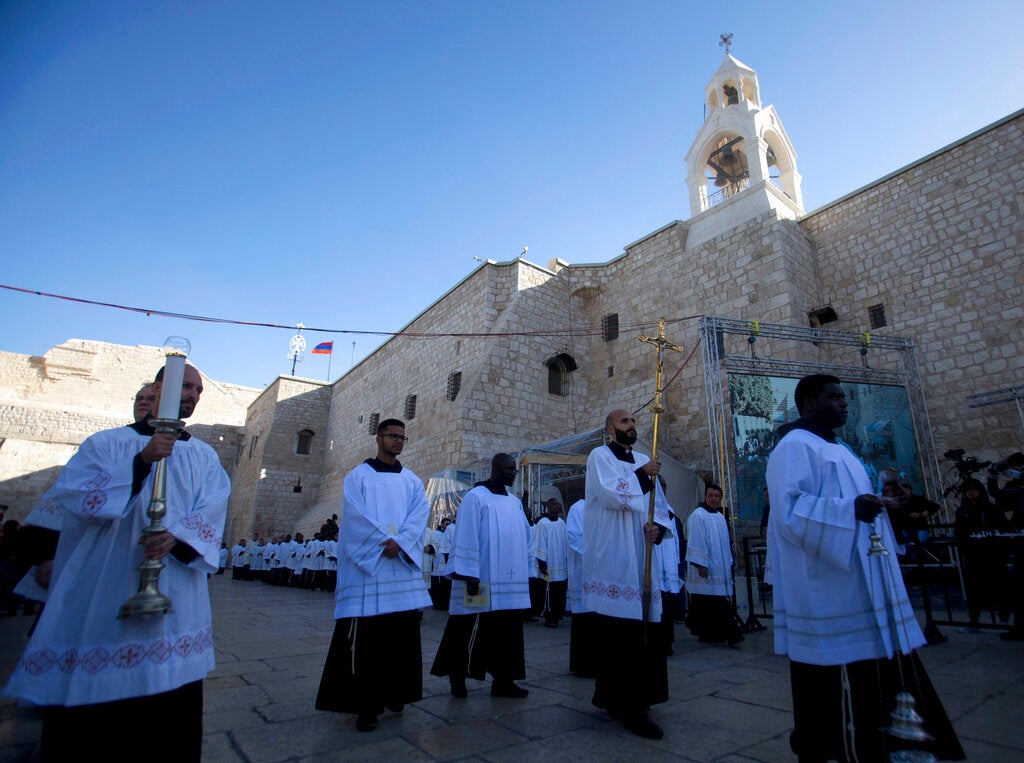 Clergymen participate in Christmas celebrations outside the Church of the Nativity, built atop the site where Christians believe Jesus Christ was born, on Christmas Eve, in the West Bank City of Bethlehem on Tuesday, Dec. 24, 2019. (AP)

BETHLEHEM, West Bank — Thousands of Christian pilgrims on Tuesday flocked to the West Bank town of Bethlehem, celebrating Christmas Eve in the traditional birthplace of Jesus.

Roger Hoagland, a Christian educator and missionary from Louisville, Kentucky, said he had come to lead a Baptist choir for a fourth time and described his visit as the experience of a lifetime.

“We love this opportunity,” he said. “We have 40 people and many of them are from the U.S. and other countries. They come to celebrate the birth of Jesus Christ.”

While Bethlehem is in the Palestinian-administered area of the Israeli-occupied West Bank, Israel’s imposing separation barrier encloses parts of the city and is a constant reminder of the complex political reality. Most of the Christmas Eve visitors appeared to be local residents, with foreign pilgrims seeming to make up a modest portion of the crowd.

Still, the celebrations capped the most successful year in history for Palestinian tourism, according to Tourism Minister Rula Maayah.

Bethlehem — located just outside of Jerusalem — has invested heavily in tourism. It’s built new hotels and tried to diversify itself by offering culinary and cultural destinations in addition to its traditional holy sites.

Maayah estimated that some 15,000 pilgrims were staying overnight in Bethlehem’s fully booked hotels this Christmas. Tourists were also staying in other West Bank towns, such as Ramallah and Jericho, in addition to Jerusalem.

In all, she said the number of foreign tourists visiting the West Bank this year is estimated to reach 3.5 million people, up from 3 million last year.

Christmas festivities are typically a boost for Bethlehem’s flagging economy and for the Holy Land’s dwindling Christian population, which has shrunk over the decades as people fled conflict and searched for better opportunities abroad.

“Our message this year is that Christmas is a message of joy,” Maayah said. “But of course we are celebrating Christmas while we are still under occupation. We hope that we will celebrate Christmas joyfully next year with the end of occupation so that we could celebrate like all other nations in our independent country without occupation.”

The Church of the Nativity, where Christians believe Jesus was born, hosted Palestinian dignitaries and pilgrims from around the world for a midnight Mass. The Palestinian president, Mahmoud Abbas, was among those in attendance.

At midday Archbishop Pierbattista Pizzaballa, the head Catholic cleric in the Holy Land, crossed an Israeli army checkpoint from Jerusalem to Bethlehem, where he was greeted by prominent members of Bethlehem’s Christian community. He later celebrated Midnight Mass at the Church of Saint Catherine, part of the Church of the Nativity compound, which houses the grotto revered as Jesus’ birthplace.

In his homily, Pizzaballa lamented the violence and deep divisions that characterize the modern Holy Land. But he also praised those who pursue what he called the “style of Bethlehem,” or example of Jesus.

“Celebrating Christmas also means celebrating those who still have a desire to love mankind and put themselves on the line for it,” he said. “Here in the Holy Land, and not only today but every day of the year, there are still many people who celebrate the Christmas of Jesus in this way.” 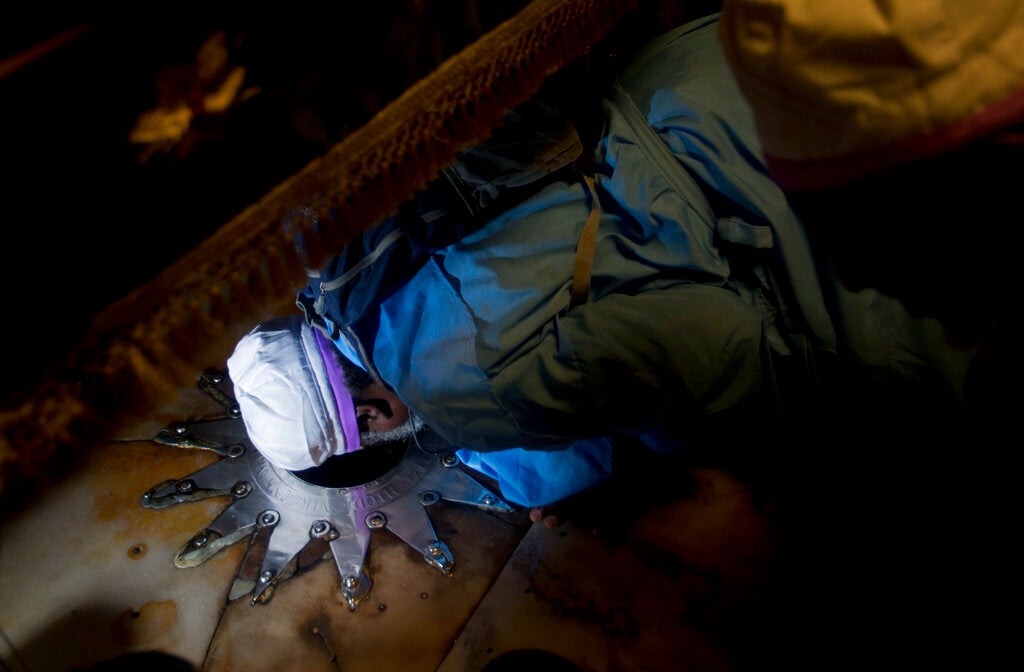 A worshipper prays inside the Church of the Nativity, built on top of the site where Christians believe Jesus Christ was born, on Christmas Eve, in the West Bank City of Bethlehem. (AP)