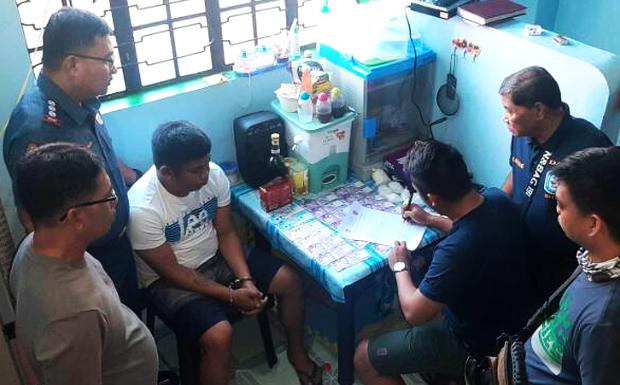 Policemen conduct inventory of P2.6 million worth of suspected shabu seized from a frustrated murder suspect in Malabon City on Tuesday, Dec. 24, 2019. (Photo from the Navotas City Police Station)

MANILA, Philippines — Police confiscated some 387 grams of suspected crystal meth, locally known as shabu, worth P2.6 million, from a man they were hunting for alleged frustrated murder.

Police identified the suspect as John Rey Marasigan, 19, who allegedly shot a fisherman on different parts of his body while he was walking along a narrow alley in Barangay Tangos South, Navotas City on Monday.

Marasigan was arrested in Barangay Dampalit in Malabon City at about 7:15 a.m. Tuesday after a hot pursuit by police officers from Navotas in coordination with officers from Malabon.

Aside from the suspected illegal drugs, police allegedly found on Marasigan a .45 -caliber pistol and seven bullets when he was arrested.

In its report, police described the suspect as a drug pusher included in the drugs watchlist.

The suspected illegal drugs seized from the operation were brought to the crime laboratory office of the Northern Police District for testing while the recovered gun and ammunition will be turned over to the Philippine National Police headquarters at Camp Crame for ballistics.

The suspect was brought at Navotas City Police Station as he faces additional charges for possession of illegal drugs and a firearm.