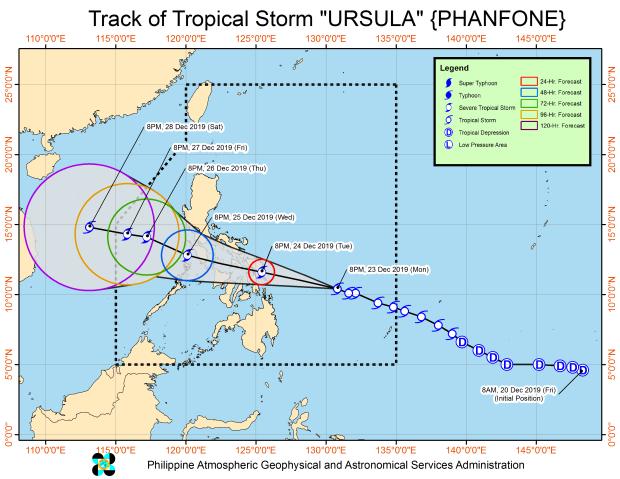 MANILA, Philippines — Weathermen raised Signal No. 2 in Eastern Samar, Samar, Leyte and Biliran on Monday evening as Tropical Storm Ursula inched toward the coastal town of Guiuan that has suffered the brunt of several powerful storms, including Supertyphoon “Yolanda” (international name: Haiyan) in 2013.

Moderate to heavy rainfall is also expected on Christmas Eve and Christmas Day in several provinces in the Visayas, according to the Philippine Atmospheric, Geophysical and Astronomical Services Administration (Pagasa).

In a severe weather bulletin issued at 11 p.m. on Monday, Pagasa said Ursula (international name: Phanfone) also predicted light to moderate to intermittent heavy rain in the Bicol region; the provinces of Quezon, Marinduque, Oriental Mindoro, and Surigao del Norte; and rest of the Visayas.

Metro Manila will experience light to moderate rain on Christmas Day, it said.

Pagasa warned that damaging winds could begin to affect Guiuan by Tuesday afternoon.

Signal No. 1 was declared in the following areas:

Masbate including Ticao and Burias Islands and Cuyo Islands

It was moving west at 30 kph, carrying maximum sustained winds of 85 kph near the center, with a gustiness of up to 105 kph.

Ursula is expected to gradually strengthen into a severe tropical storm before it makes landfall in Eastern Visayas on Tuesday, Pagasa said.

Maritime activities may be suspended eventually where wind signals would be raised.

Major carriers Philippine Airlines (PAL) and Cebu Pacific canceled 20 domestic flights scheduled for Tuesday that were either bound for or departing from airports in the Visayas.

Twelve PAL fights going to and coming from airports in Tacloban, Cebu and Calbayog from 1 p.m. to 7 p.m. were canceled, along with eight flights of Cebu Pacific and CebGo arriving from or departing for airports in Tacloban and Cebu from 11 a.m. to 9 p.m.