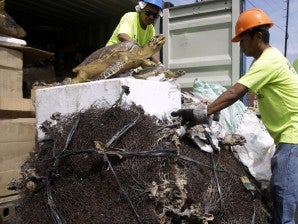 Workers arrange rare black corals and endangered green sea turtles as they are presented to media in Manila on May 30. AP

ZAMBOANGA CITY, Philippines—Two days of inspections of warehouses and buying stations of a Zamboanga-based trading company have yielded such a large stash of protected corals, shells and other marine species that two 20-foot container vans were not enough to hold them, the head of the Bureau of Fisheries and Aquatic Resources said here Saturday.

BFAR Director Asis Perez said the authorities discovered tons of corals and shells in one warehouse they inspected Saturday in the village of San Roque .

“We saw a still undetermined, huge volume (of corals and shells), much bigger than what were seized in Manila,” he told the Inquirer.

Asked to give an estimate, he said the shells and corals in that particular warehouse of the Li and Lim Trading would not fit in two 20-foot container vans. “I guess more than that and we need to evaluate how large this stash is,” Perez added.

He said a team of experts was expected in Zamboanga “to help us identify, determine and categorize the type of species found at one of the warehouses.”

“We have conducted a thorough search,” he said. “There’s indication of illegal items, we can see illegal items even if we don’t open the boxes, and in the second premises, shells are in boxes and sealed and there were several cuts of still undetermined items,” Perez said.

Rosella Contreras, head of the BFAR’s Fish Inspection and Quarantine Services in Western Mindanao, said among the items they saw inside one of the warehouses were porcelain clams or Hippopus porcellanus, a protected species harvesting of which is banned.

Sajili said they also inspected a warehouse operated by Uan Huat Trading, which he said is owned by Joe Pring, also known as Joe Ping, whom he identified as Taiwanese and the husband of Olivia Li and Lim Trading who has made herself scarce in the wake of the seizure in Manila late last months of two container vans filled with black corals and stuffed marine turtles.

In 2007, the authorities also seized protected marine species from Uan Uat’s warehouse and Pring was charged with violating the country’s fisheries laws. The case is still pending.

Chief Superintendent Elpidio de Asis, chief of the Western Mindanao police, said Pring personally welcomed the fact-finding team and allowed it to conduct the inspection of his warehouse.

Citing the permit obtained by Li from the city’s business licensing office, De Asis said the businesswoman was operating a legitimate business.

“This does not look to me like smuggling. Some people were trying to make money and they did not know they were gathering banned marine products,” he said.

But BFAR’s Perez disagreed, saying that a highly organized syndicate could be behind the smuggling of protected corals and shells from this city.

“So many people were involved. People who are gathering and selling, consolidating… there are people making sure it’s transported and people who hide their real identities like the consignee of the one shipped and seized in Metro Manila,” he said.

Perez said, “There’s really a pattern. In other words it’s a pretty well thought of operation, it’s not something you do by impulse, well thought process, well planned, by all indications it’s a syndicated crime.”

He said village officials in his province could testify that those gathering corals there were escorted by heavily armed men.

But De Asis again rejected the idea of syndicated crime, saying the gathering and selling of corals have become a cottage industry for some fishermen in the Western Mindanao area.

In a related development, the Bureau of Customs said during a meeting with BFAR and other government officials here Friday that it could not possibly detect illegal items shipped out of the port here to other parts of the country.

The BOC said it inspects only cargoes bound for foreign destinations and not inter-island shipments, and pointed to the Philippine Ports Authority as the responsible agency. But PPA officials also washed their hands, saying it was the job of the BOC.