‘Ursula’ slightly accelerates; Signal No. 1 up in 13 areas in Visayas, Mindanao 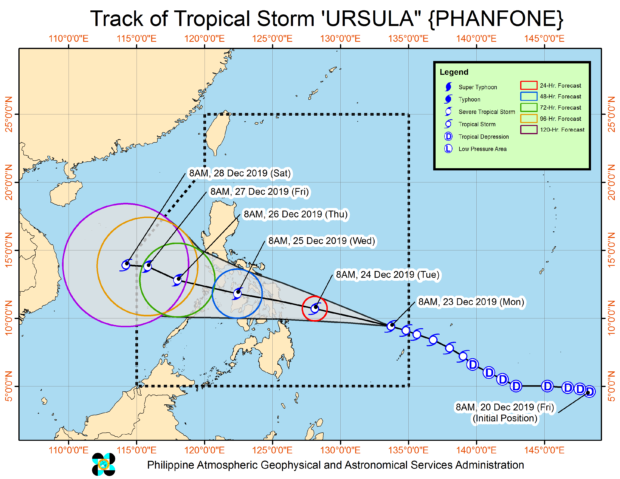 Public storm warning Signal No. 1 was raised over the following areas:

Ursula was last spotted 790 kilometers east northeast of Hinatuan, Surigao del Sur, with maximum sustained winds of 65 kilometers per hour near the center and gusts of up to 80 kph, the Philippine Atmospheric Geophysical and Astronomical Services Administration said.

It was moving west northwest at 30 kph.

Ursula is expected to intensify into a Severe Tropical Storm before its anticipated landfall over Eastern Visayas on Tuesday afternoon or evening.

Light to moderate with intermittent heavy rains are forecast over Quezon and the rest of Visayas, Bicol Region and Surigao del Norte.

Suspension of maritime activities in areas where the tropical storm signal is raised., Pagasa said.