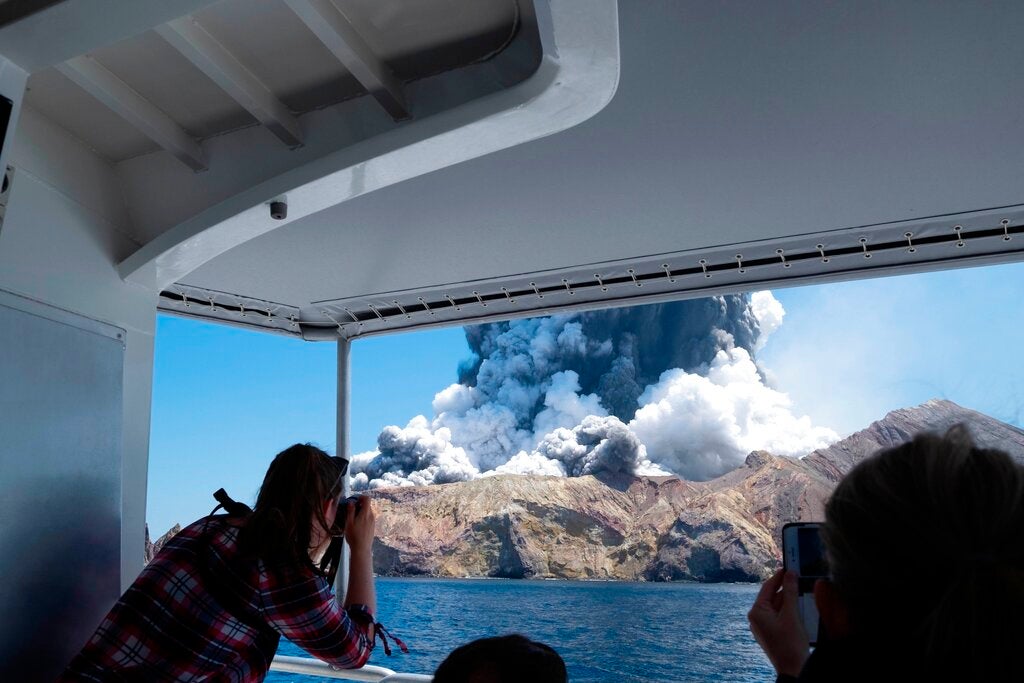 Tourists on a boat look at the eruption of the volcano on White Island, New Zealand. Unstable conditions continued to hamper rescue workers from searching for people missing and feared dead after the volcano off the New Zealand coast erupted in a towering blast of ash and scalding steam while dozens of tourists explored its moon-like surface. (Michael Schade via AP)

WELLINGTON, New Zealand — The death toll from a volcanic eruption in New Zealand has risen to 19 after police said Monday another person died at an Auckland hospital overnight.

There were 47 people visiting the tourist destination of White Island when the volcano erupted Dec. 9, killing 13 people initially and leaving more than two dozen others hospitalized with severe burns. The latest victim is the sixth person to die in hospitals in New Zealand and Australia in the two weeks since the eruption.

Two of the victims’ bodies have not been recovered after authorities believe they were washed out to sea in a storm soon after the eruption. Helicopter pilots and boat operators helped the injured off the island immediately after the eruption, but emergency services did not return to the island to recover bodies until four days later because they considered the site remained too dangerous.

Many of those killed and injured were Australian tourists who had been traveling aboard the Royal Caribbean cruise ship Ovation of the Seas.

In a brief statement Monday, police said they had been advised just before 11 p.m. Sunday of the latest death at Middlemore Hospital.

White Island, also known by its Maori name, Whakaari, is the tip of an undersea volcano about 50 kilometers (30 miles) off New Zealand’s North Island and was a popular tourist destination before the eruption. It’s unclear if the privately owned island will ever be reopened for tourist visits.

Many people have questioned why tourists were still allowed on the island after New Zealand’s GeoNet seismic monitoring agency raised the volcano’s alert level on Nov. 18 from 1 to 2 on a scale where 5 represents a major eruption, noting an increase in sulfur dioxide gas, which originates from magma.

New Zealand authorities are investigating the circumstances around the disaster.