21 people, 9 of them soldiers, hurt in Maguindanao, Cotabato blasts 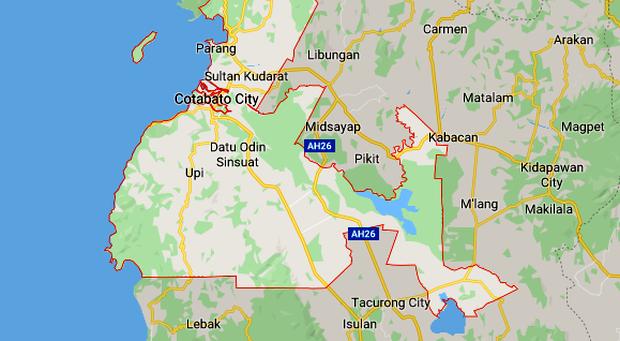 The blasts occurred in Cotabato City in Maguindanao and the nearby town of Libungan in Cotabato province. (Image from Google Maps)

COTABATO CITY, Maguindanao, Philippines — Twenty-one people, nine of them soldiers, were wounded in a series of explosions that rocked Cotabato City and the neighboring Libungan town in Cotabato province on Sunday as people were busying themselves for the holidays.

The first blast occurred at around 6 p.m. on Sinsuat Avenue in Cotabato City, where 16 people, including nine soldiers, were wounded, regional military spokesperson Maj. Arvin Encinas told the Inquirer by phone.

“It was a grenade attack. The target was our troops,” Encinas said, adding the grenade was thrown by unknown man while soldiers aboard an Army truck were passing by the area.

The explosion occurred ahead of the visit of President Rodrigo Duterte on Monday to distribute land titles to beneficiaries of the Department of Agrarian Reform (Dar) at the Shariff Kbunsuan Complex here.

“We could not discount their involvement. They are the only group we are confronting,” he said.

In the nearby town of Libungan in Cotabato province, Gov. Nancy Catamco said five civilians were wounded when a homemade bomb went off at 6:12 p.m. at the town proper, only minutes after the Cotabato City attack.

Catamco said another blast occurred an hour after, she said.