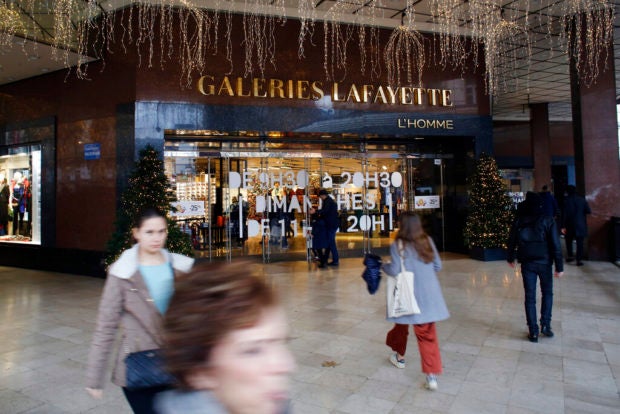 Pedestrians walk in front of the Galeries Lafayette department store in Paris, Thursday. French retailers, hotels and cafes are struggling at the height of the holiday shopping season, because a protracted transportation strike and repeated protests in Paris and other cities are keeping shoppers and visitors away. (AP)

PARIS — French travelers and tourists were struggling Saturday to get to their destinations as the Christmas season ramped up amid continuing strikes against the government’s plans to raise the retirement age to 64.

Still, only half of the high-speed trains were running and regional trains, including in the Paris region, remained severely disrupted.

French President Emmanuel Macron, on a visit to Ivory Coast, called for a “truce” during the holidays “out of respect for the French” who need to travel for Christmas. He called on the workers on strike to act “responsibly” and show ”collective intelligence.”

“Things are getting better, some solutions have been found” to improve train transports despite the continuing disruptions, Macron said. “The government works tirelessly.”

In the French capital, eight of the 14 metro lines were closed and many others were running erratically.

In Paris’ Saint-Lazare train station, serving western France, Jean Baptiste Beudon was relieved to see his train was not canceled. “We got confirmation two or three days before the departure, but we were still worried that we would not have our train,” he told The Associated Press.

Aurelie Lecerf, travelling with her children, said: “We arrived here at six o’clock this morning to get a train. The last one was full but we should get the next one.”

Millions of French are expected to travel in the next few days for Christmas family reunions. Many have sought alternative modes of transport, using car-sharing services or bus companies, which have seen a surge in reservations.

Most transport unions have called for the strikes to continue during the holidays, as talks between the prime minister and labor leaders failed to reach a compromise this week.

Recent polls show a majority of French still support the strikes over fears they will have to work longer in return for lower pensions — but a majority are also in favor of the suspension of the protest during the Christmas holidays.